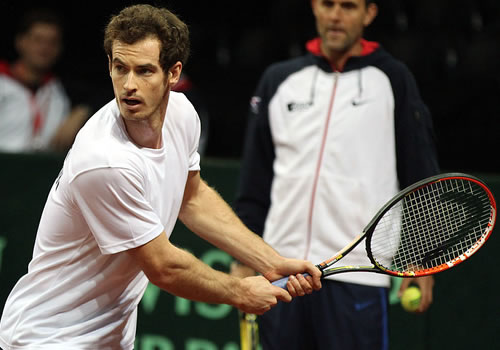 Andy Murray insists that he has no problem dealing with the pressure that comes as part of being the top player in Great Britain’s team ahead of this weekend’s Davis Cup final.

The Scottish world No2 is gearing up for this weekend’s final showdown against Belgium in Ghent as the Brits seek to win their first Davis Cup title since 1936.

The 28-year-old was asked if he feels the pressure of the tie being like a “Belgium versus Andy Murray” clash at his pre-final news conference on Thursday.

However, the former Wimbledon champion shrugged off talk of the pressure.

“I think if you look at it that way, they’re actually putting a lot of pressure on their own players in the other matches, to be honest,” said Murray.

“I’m happy to take as much pressure on my shoulders as is needed.

“I’ve been in that position I think a lot of times in my career. I think I will be able to deal with it But, like I said, I also believe in all of the players in our team.

“Everyone, when they’ve been asked to, stepped up and performed extremely well in the Davis Cup. Kyle [Edmund] has a lot of weapons on the court. He has a lot of firepower out there. It’s not going to be an easy match tomorrow for David [Goffin].

“I think looking at it as Belgium versus me is actually counterproductive to them if that’s the case.”