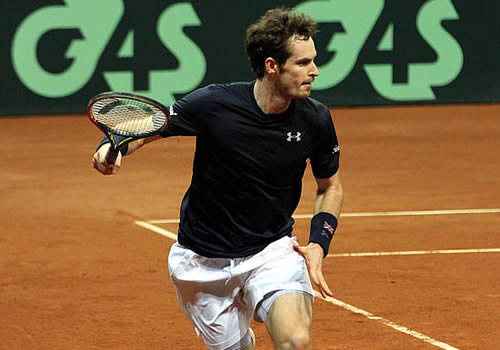 Andy Murray was surely watching the antics of fellow Briton Kyle Edmund as he made his preparations for his opening rubber in the Davis Cup final in Ghent. And if ever there was a lesson in not taking a lower-ranked opponent for granted, that was it.

Edmund, ranked 100, gave the No16 ranked David Goffin and the 12,000 or so Belgian supporters at the Flanders Expo, a real test, racing to a two-sets-to-love lead before the home man rose to the challenge for a comeback win in five.

Ruben Bemelmans, ranked at 108, was a surprise second-string for the Belgian singles rubbers, even though the higher ranked Steve Darcis had picked up an injury a month ago. But the 27-year-old proved to be a tricky customer.

A left-hander, he clearly came out with a plan to break up the Murray rhythm. And although the Briton got a quick break in the opener, Bemelmans played the first of what would be a frequent winning play against Murray, a perfect drop-shot. However Murray got another break in the sixth, held to love, and served out the set, 6-3.

It was a good start for the Briton, but then Edmund had tasted a bitter reversal of form and fortune just a couple of hours before. He now returned courtside after an emotional press conference in which he tried to explain how an occasion such as this affects the individual:

The experienced Murray was in no mood to let this occasion get to him, despite an increasingly raucous Belgian crowd that cheered, shouted and, when asked to quieten down, made hushing sounds instead—almost as distracting. Murray, unlike Edmund, simply took his time, blew into his palms, waiting for the umpire to do his business, and continued.

He broke quickly in the second set, and survived a long fourth game to go 3-1. This time he would not give up the advantage, and continued to defend superbly from the baseline and make precious few errors.

Bemelmans, for his part, continued to attack, used the drop shot, came to the net time and again—he would do so a total of 38 times in the match—but still Murray broke again to serve out the set, 6-2.

The Belgian remained remarkably dogged and showed no signs of flagging, much to the joy of his supporters. When he broke to take a 4-2 lead in the third set, the fans rose as one, but Murray soon took back control with a searing backhand winning pass.

With two hours on the clock, they were poised at 4-4. The crowd continued to niggle at Murray, who obliged with a double fault for break point in the 10th game. He compensated a moment later with an ace on his second serve, and roared at the British bench.

He was ready to go for the kill, made a return-of-serve forehand winner for three break points and another off the same wing to break. It was the work of a moment to serve out set and match, 7-5.

Murray was kept on court almost as long as Edmund’s five-setter, almost two and a half hours of entertaining tennis, and possibly a tougher examination than Murray either expected or wanted. For he is back tomorrow for the doubles rubber in the knowledge that he definitely has to play his third match come Sunday.

“I think both teams are capable of winning all of the points here,” said Murray afterwards. “I did say that before the tie started. Today’s matches I think proved that, especially the first one.”

It remains, then, all to play for, as expected. It might have been a very different picture had Edmund not wavered or had Goffin not switched the momentum so effectively in the third set of that opening rubber.

Edmund’s effort in his debut Davis Cup appearance was an impressive one, but it is Murray who, not for the first time, and not the last this weekend, continues to lead by example as soon as he dons the British colours.