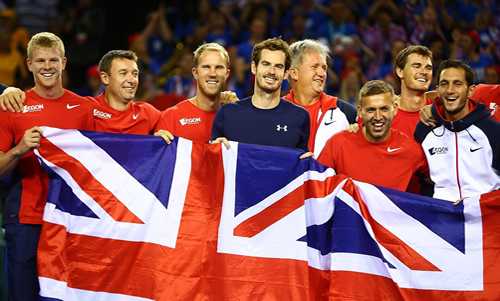 The Lawn Tennis Association is offering fans the chance to write their own names into history with the creation of a bespoke tracksuit that will be worn by the Great Britain Davis Cup team at the final’s closing ceremony on 29 November.

For the first time in 79 years, Great Britain, who will be led by captain Leon Smith and Andy Murray, have a chance of winning the Davis Cup after beating the three other Grand Slam nations, USA, France and Australia, along the way.

Great Britain’s Davis Cup team captain Leon Smith said: “Our journey to the Davis Cup final has been one we couldn’t have done without the incredible support of our fans.

“The ‘Write Your Name Into History’ campaign is our way of recognising and thanking each and every one of them for being there with us every step of the way. The whole team will feel immensely proud when they put their team tracksuits on and it will make it even more special to see the names of those who have supported us.”

To enter the Write Your Name Into History competition, fans need to share a message of support to the Aegon GB Davis Cup team.

They can do this by either posting a supportive message on the British Tennis Facebook page or tweeting the @BritishTennis Twitter page using the hashtags #BackTheBrits and #DavisCupFinal.

Oliver Scadgell, director of major events and competitions at the LTA said: “This truly is a momentous time for everyone involved in British Tennis.

“We as an organisation have worked hard to support the GB Davis Cup team, with the staging of three fantastic home ties throughout the year, and we couldn’t be prouder that they have reached the final.

“We can’t wait to share this moment with the nation, and hope fans will be supporting all over the country as the team take to the court in Ghent.”

The deadline for messages is 23:59 GMT on Tuesday 24 November. Winners will be picked at random and their names will appear on the real tracksuits worn by the team, including Andy Murray. Space on the tracksuit is limited, so be a part of something momentous and ‘Write Your Name Into History’ today!