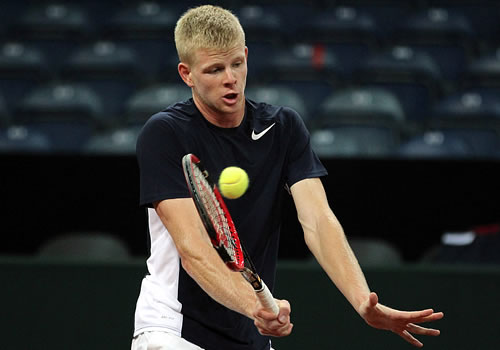 The rivalry is one of the oldest in the tournament’s history, between two of the oldest members of the Davis Cup family. Their first match was played 111 years ago, in their only final in 11 meetings—until now.

On that occasion, Great Britain won, largely thanks to a pair of brothers. The younger of the two, a Grand Slam champion, Olympic gold medallist and former world No1, won both his singles rubbers and doubled up with his brother to win a third.

Sound familiar? Back then, it was the brothers Doherty, Laurie and Reggie, who carried GB to the second of nine titles. This year, another pair of brothers, the Murrays Andy and Jamie, hoped to do the same.

Younger brother Andy, also a Grand Slam and Olympic champion and the end-of-year No2, had already won eight rubbers this year and, with the three he is expected to win in this tie, he could become only the fourth man ever to win 11 rubbers in a single year.

However first came the youngest man in the squad, making his GB debut. Could 20-year-old Kyle Edmund get his nation off to a flying start? He was, in his favour, fresh from a Challenger title won on clay in South America—a big, strong presence eager to make his mark against Belgium’s best, the No16 ranked David Goffin.

The packed 13,000-capacity arena would be drenched in orange, gold and black, but the home fans would not have it their own way. Britons had braved hell and high water to get the scarce tickets and reach Ghent. One father and his son, clasping tickets from the LTA ballot for Friday’s action, had driven from Glasgow and would return the next day.

And then there was the ‘barmy army’, braving the freezing rain of Ghent in kilts and T-shirts, draped in Union flags, their chants fine-tuned in some secret location.

And all of them were rewarded with a cracker of an opening match that threw the form and rankings book out of the window.

Goffin was clearly tense—for much like Andy Murray, he carried the weight of expectation of a nation—and a nerveless Edmund survived a tough 12-minute opening service game, and break points, to race to a 5-0 lead.

He was hitting freely with his big serve and uninhibited forehand, punching holes through the Goffin baseline game. The Belgian was tight, and having never played Edmund before, seemed unable either to read or contain his opponent.

The Briton continued to play aggressively, but showed his first sign of nerves in attempting to serve out the set: three straight errors and he conceded one break back, but with his second bite of the cherry, he served it out with an ace followed by his signature forehand, 6-3. He had made 13 winners to just three errors, and he began the second set in the same vein.

A love hold to open, a break in the third game, and another love hold opened a 3-1 lead. Goffin was still on edge, making uncharacteristic errors, including a double-fault to give away another break. More was to come, and the confident Edmund broke again to take the set, 6-1.

The Belgian’s serve and his error rate were both letting him down—38 percent and nine respectively for the set—while Edmund made just one unforced error.

But now the prospect of the biggest win in his career—over his highest ranked opponent and in his highest profile match—seemed to hit Edmund. His serve wavered at the start of the third, slipping below 40 percent, and Goffin sensed his chance to break twice for a 4-1 lead. Edmund got one break back, only to be broken again, and the Goffin flow, an elegant mix of spin and angle and touch, served out the set 6-2.

Edmund’s rhythm was further disrupted by a long delay to mend the net. Here, then, was where Goffin’s experience and greater variety of play kicked in to full advantage.

Edmund seemed to be rushing, stepping in to serve too quickly—and missing. Goffin broke, and after another delay to fix the net at 3-1, broke again. The Belgian was now hitting the lines with every strike, and broke to level the match, 6-1.

It was not just experience of big match-play but of five-set tennis. Edmund had played few Grand Slams, no Davis Cup ties, and so had just one five-set match to his name. The physical demands, probably not helped by having recently played in South America, began to weigh heavy. Combined with some increasingly smart and precise tennis from Goffin, the match slid by in flash, 6-1, after 2hrs 48mins.

“I started very well,” said Edmund afterwards. “Obviously not playing a Davis Cup match, I was nervous naturally. I was just trying to focus on trying to block out the atmosphere, the occasion, and just play tennis, which is something I do every day. I hit thousands and thousands of balls.

“It turned [and in] the third set he started to get on top of me. Then things started to fall away. In the fourth set I was struggling physically, and in the fifth set. It was just disappointing that my body couldn’t hold up the way I would have liked it to.”

The British supporters had perhaps not expected a win from this first rubber, but Edmund’s bold efforts had them on the edge of their seats. It was not to be, but not for lack of spirit and attack.

So as expected, Belgium took an early lead: Would Murray encounter as tough a test as Goffin when he took on a man of a similar ranking to Edmund. A few hours would tell.