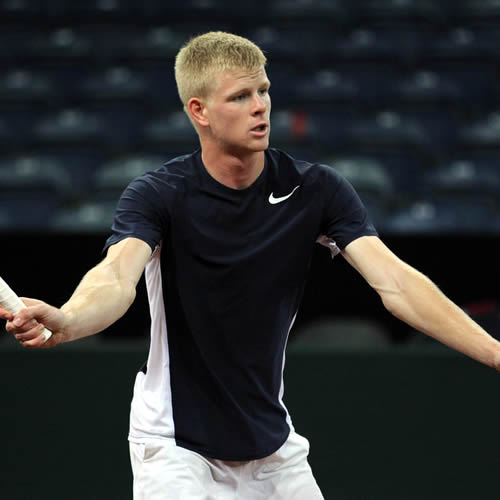 After making the bold decision to give 20-year-old Kyle Edmund the stage on the opening day of the biggest Davis Cup tie for Great Britain since 1936, captain Leon Smith admitted it had been a tough decision.

Smith was in the happy position of having two possible No2 strings who came fresh from Challenger victories this autumn. However James Ward, who played a not inconsiderable part in getting the team to the final after his heroic fifth-set 15-13 victory over John Isner in the first round, won his event on hard courts.

Edmund’s title came this very month on Argentina’s clay, which was enough to clinch the deal, though Smith can substitute Ward come Sunday if the occasion demands. But a look back at Edmund’s year and it has been a season of improvement and firsts.

At the Australian Open, he qualified for the main draw of a Grand Slam for the first time. Fast forward to the French Open, and he not only qualified but won his first Major match, only to be forced out of the second round by injury.

That all took Edmund from 192 at the start of the year to break the top 100 in August. Even so, to plunge the tall, big-hitting man in at the deep end was—yes, a bold choice.

Smith explained: “I think where Kyle’s ranking sits now, and that he’s very comfortable on this surface, is why we’re starting that way. But still a very difficult decision.”

But hitting up with Andy Murray ahead of his opener against the talented David Goffin, Edmund looked confident, and he sounded ready to step up to what, on paper, was a formidable challenge against the 24-year-old Goffin. The slight and slender Belgian won the Comeback Player of the Year Award at the end of last year after a storming rise to 22 from outside the top 100, having broken his wrist in 2013. Now he owns two main tour titles from five finals, and reached the fourth round of the French Open back in 2012.

Goffin has also been practising for this tie since his last match of the ATP season—as luck would have it, a hammering defeat to Murray.

So how did Edmund feel, having travelled back from his final tournament in Uruguay just last week?

“I came back Saturday evening. It was about a 12-hour flight. It takes a few days normally to get over the time difference. [But] throughout the year we’re having to deal with jetlag and travel. We find ways in ourselves to deal with that. It’s no different this time. I know what I need to do to get my body in the best shape.

“I feel fine. It’s obviously helped me physically to go to South America and play on the clay. It’s not like I’m coming from a 12-hour flight and changing surface.”

And how about the pressure of performing in his first Davis Cup rubber and on the highest-profile occasion?

“It’s just exciting really. Obviously for myself personally, it’s my first match of the Davis Cup for my country. It’s exciting itself, the fact it’s a final. At the same time it’s a team event and the team comes first.

“My job is to give my best and give my all. The ultimate goal is obviously to put the point on the board for Great Britain.”

It’s a big ask, of course, against the substantially more experienced Goffin, a highly talented player with clay credentials. And then there will be the 10,000 Belgian fans in what will be a cauldron of an atmosphere. But Edmund is keen to take on the challenge.

“Well this is definitely going to be the biggest crowd I’ve played in front of—probably the biggest occasion. The experience I’ve had close to that is probably in Paris in my first round when I played a French guy in front of a loud French crowd. That’s my experience in that regard.

“But, yeah, this will definitely be louder, a lot more people watching. It is a new experience for me. It’s something I’m going to have to learn as I go through the match. But its a good problem—and it’s exciting!”

It is, without a doubt, a baptism of Davis Cup fire for Edmund, but he may be helped by the fact that he carries few expectations compared with his first opponent, for Goffin carries his nation’s hopes on those slender shoulders. And the beauty of Davis Cup is that you can always expect the unexpected.