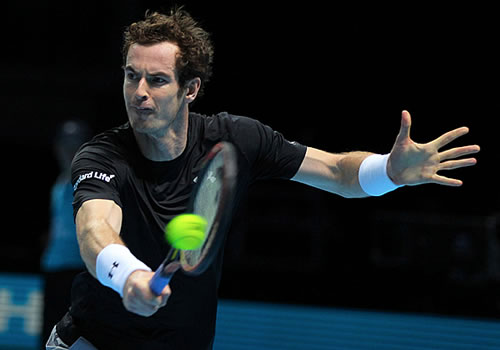 Andy Murray will be in action for GB in Ghent this weekend Photo: Marianne Bevis

Just by reaching the Davis Cup final on the last weekend of the tennis year, all the players who are gathered at a warehouse of a venue in Ghent are already part of a history-making story.

Team GB is contesting a 20th Davis Cup final and its first since 1978. At stake is the nation’s first title since Fred Perry led GB to its ninth way back in 1936.

But if this final carries huge significance for Great Britain, it carries even more for the home nation. Belgium is into the Davis Cup final for the first time since 1904—and despite being one of the first nations to join the biggest annual international team competition in sport, it has never won.

For one Briton in particular, victory could complete a quartet of extraordinary achievements. Andy Murray, already the end-of-year No2 for the first time, became the first man since Perry to win a Grand Slam—at the US Open in 2012—and to win Wimbledon—in 2013. He was also the first to win Olympic gold since 1908. Now he is after the full set with the Davis Cup.

And Murray’s personal commitment to his team’s success cannot not be overstated. In helping GB into the World Group, and on into this year’s final, he has more often than not played three days back-to-back, singles and doubles—all in the best-of-five-set format. And frequently, that effort has come straight after deep runs in tennis’s biggest tournaments.

Take the quarter-finals against France after Wimbledon, which had Murray on his knees with exhaustion by its conclusion. Take the semis against Australia after a gruelling US Open Series, in a tie that sandwiched a five-set marathon doubles win between two singles wins.

And take this week, as Murray attempts to accommodate a dramatic switch from hard to clay courts after playing the ATP World Tour Finals at London’s O2.

GB squad (with world rankings)
Andy Murray (No2)
Kyle Edmund (No100)
James Ward (No156)
Doubles: Dom Inglot (No23 in doubles) and Jamie Murray (No7 in doubles)
Captain: Leon Smith

He has played eight out of the nine rubbers Great Britain has won in 2015. Should he win another three this weekend, he will become only the fourth man to win 11 rubbers and only the third to achieve an 8-0 singles win-loss record in a single Davis Cup year since the introduction of the World Group in 1981.

And this year, the GB squad and its travelling band of supporters have had one extra stress to absorb: security concerns following terrorist alerts through France and Belgium. The team delayed its flight by a day, and bypassed Brussels, but by late Monday they were practising on the newly-laid clay court in Ghent. Little wonder, perhaps, that one of he first questions posed to Murray was about security.

“I think we just listened to all of the right people. They have a fantastic security team here… In situations like this, it’s great we have such capable people that are able to give us the best advice. Everyone, I think, is very comfortable in the team. “It was obviously a bit concerning a few days ago. I think once we got here and into the hotel, came to the venue and saw what it was like here, that made everyone a lot more comfortable… Here in Ghent, everything seems fine. It’s very quiet. I think it’s a really nice city.”

The team is now practising in earnest, so just what are the playing conditions? Murray explained: “I think the court’s good. Like Leon [Smith, team captain] said, it has been very cold in there yesterday and also this morning. Obviously that changes the way the court plays and the way the ball travels through the air. Hopefully this afternoon and the next couple of days we’ll get to play in more similar conditions to the matches. But the transition has been fine. I’m really glad that I got the four or five days on the clay before Tour Finals.”

He went on to elaborate about the rarity of playing on clay indoors: “I think the fact that it’s indoors is fairly significant because there’s not one indoor clay court tournament throughout the whole year. I could be wrong, but I think the last time I played on an indoor clay court was actually against Switzerland—was like 10 years ago… So it’s kind of hard to know exactly how the court’s going to play come Friday. But I liked it yesterday.”

And that is music to supporters of Murray and Team GB: The Briton has always found clay a challenge, though since his back surgery at the end of 2013, he has had more success on the twisting, sliding dust: the Munich title, followed by the Madrid Masters earlier this year.

But asked about what it would mean for him to complete that quartet of achievements, Murray was, as is his way, keen to credit the entire network of players and back-room support that has got him and GB to this position.

“I think things are always difficult to know until it happens. It’s been such a long time that any Brits had won Wimbledon and a Grand Slam, it was extremely significant.  “To win the biggest team competition in tennis, having beaten three Grand Slam nations, I think it would be a huge victory for everyone in the team. It would be well-deserved, as well. It’s taken a lot of time and hard work from many of the players, many of the staff, coaches, physios, everyone.  “I know when you win a Slam or a big competition, it’s years in the works. But this is a bit different. The last five years it’s been a progression from a pretty low place in world tennis to playing for the biggest team competition. It would be big for everyone involved, for sure.”

And in a parting shot to any who doubt the commitment not just of Murray but of his brother Jamie—also fresh from his first participation at the World Tour Finals—and the trio competing for a chance to play their part in Ghent, Dominic Inglot, Kyle Edmund and James Ward, he added:

“We may not get the outcome that we want, but it won’t be through lack of trying or lack of care from anyone in the team.”

GB-Belgium final: the nuts and bolts

– Belgium won their last meeting 4-1 in the Europe/Africa Zone Group I in 2012, with three members of this year’s nominees, Ruben Bemelmans, Steve Darcis and David Goffin, all winning rubbers.

– Great Britain won their previous encounter in 1963, 5-0—on clay in Brussels.

– Great Britain has a 4-2 record against Belgium on a clay court, while Belgium won the only previous indoor match in their 2012 meeting in Glasgow.

– Great Britain is the only nation that has competed in all the editions of the Davis Cup since 1900.

– Belgium reached the final after beating Switzerland, Canada and Argentina, all played at home—and only against Argentina did they play a man ranked in the top 50, Leonard Mayer at 35.

– GB reached the final after beating the USA, with No11 singles player John Isner plus the Bryans in doubles, then France, who boasted three top 15 players, and finally Australia, with top-20 Bernard Tomic plus Lleyton Hewitt.