Whether or not he ever plays in it again, Roger Federer, as much as Lleyton Hewitt, has earned the Davis Cup 'Commitment Award' 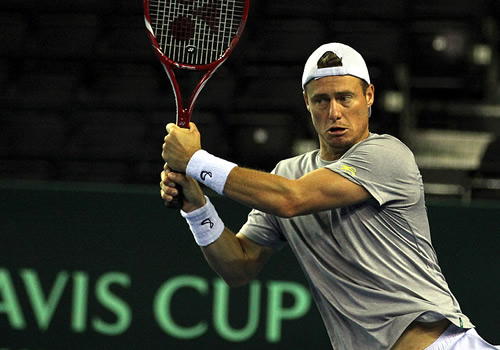 All around the globe last weekend, crowds flocked in their tens of thousands to one of sport’s biggest annual spectacles.

The Davis Cup, which has been a part of the tennis calendar since 1900, now boasts a membership of 126 nations, and in this weekend’s World Group semi-finals, there was plenty of history on the line for two of the tournament’s oldest members.

Great Britain, carried by the broad shoulders of Andy Murray, reached its first final in 37 years over one of its oldest rivals, Australia, and now competes for a first title since 1936 come November. And the aspirations of the other winning semi-finalist will be even greater. Belgium beat Argentina to reach its first final since 1904—and will compete for a first ever title.

Yet amid the chanting and cheering, the joy and celebration, there was a quiet, significant, and rather emotional exit.

Lleyton Hewitt, a stalwart of Davis Cup since he burst onto the tournament’s stage as a brash teenager in 1999, was holding a solo news conference to mark his last ever appearance for one of the most successful nations in Davis Cup history.

Australia has won the Cup 28 times since it joined the Davis Cup family in 1905, and in all that time, not one of its players has been involved for more years—17 of them—or played more ties, 41, won more singles matches, 42, or won more matches overall, 58. In that very first year, Hewitt was part of the title-winning squad, and by the time he won it again in 2003, he had reached No1, become a two-time Masters Cup champion and was a Grand Slam champion twice over.

Now, age 34 and with a longer catalogue of injury and surgery than any player deserves, an older, wiser and more mellow Hewitt was going out on a high from Australia’s first semi-final in almost a decade. His parting shot was a spectacular five-set doubles rubber that reminded both his opponents and the packed Emirates Arena just what they would be missing.

He is clearly leaving with no regrets.

“It’s been a great journey—taken up a lot of my lifetime, playing for my country—and enjoyed every moment of it. I remember the older guys when I came into the team said you’ll have some of your biggest highs in tennis in Davis Cup and some of your toughest losses, and that couldn’t be more true.

“The opportunity to celebrate at the end of a winning year like 2003, and also ’99 in my first year… But I’ve definitely had my share of gut-wrenching losses as well, but I think it does make you stronger as a professional tennis player because it is a very selfish sport for 10, 11 months of the year when you are concentrating on your own game. So for me, I’ve always loved the atmosphere of getting together in a team and playing for my country.”

He added, with a smile: “Got no regrets. We did everything we could have done, laid it on the line again… Disappointed purely because we were that close to getting to another final. It’s been an awful long time since we did that, and it would have been really good for these young blokes to have that opportunity like I did at such a young age. But they are all going to be better players because of what happened this weekend.”

If there is one thing he will miss, he admitted, it would be playing on grass: “I’ve always loved playing in Great Britain, and obviously had some of my biggest successes here, winning Queens four times and Wimbledon. That’s one of the things I’ll miss, the grass court season, coming back and playing here.”

Would he reconsider leaving just when Australia’s new talent was bearing fruit? He was adamant: “No—no plans to change.”

Meanwhile, another man who, like Hewitt, is among an exclusive band of active players to own the Davis Cup Commitment Award, was making a more unheralded exit.

Roger Federer, like Hewitt, is 34 and played the first tie for his nation in 1999, but he has rarely garnered the same plaudits for his Davis Cup efforts as Hewitt. Yet at the very time Hewitt was battling to a five-set doubles loss in Glasgow, Federer was doing the same in Geneva, having already won a singles rubber the day before—fewer than five days after playing the US Open final.

Federer would also, a la Murray, play a third—and winning—rubber to help keep Switzerland in the World Group.

His participation, along with that of compatriot Stan Wawrinka, was, with some reason, attributed to his desire to play the Rio Olympics next summer—what will be a remarkable fifth Olympic appearance. But that should not detract from a career-long commitment to Davis Cup almost as great as Hewitt’s.

For Federer too holds several records in Switzerland’s all-time archive: the most match-wins, 70; the most singles wins, 40; and joint top with Heinz Gunthardt for years played, 15.

Federer has, indeed, won more singles matches than any other active player aside from Hewitt, who he trails by only two, and he has played the same number of doubles matches as his old friend and adversary. He has also played every year since 1999 bar one—and threw his entire weight behind the 2014 campaign with Wawrinka to win Switzerland’s first Davis Cup title.

Hewitt explained the kind of physical and mental effort required to play three best-of-five rubbers on three consecutive days, and particularly in the context of performing at the highest level on the main tour and in the Majors.

“It’s bloody tough, really is, got to be a special kind of competitor to lay it on the line day in day out. Andy is at the peak of his powers at the moment and obviously physically he’s in such good condition to be able to do it and bounce back so fresh day after day, but it takes someone like Andy to be able to do that.”

He was talking, of course, of the 28-year-old Murray, though it could as easily have been applied to the 34-year-old Federer, who is ranked one place above Murray at No2.

With that in mind, Hewitt went on: “Roger last year—he’s won pretty much everything there is to win, and he laid it all on the line—getting towards the end of his career, as well, when it could have jeopardised him winning more Slams.”

For Federer, the rigours of the 2014 victory were still raw in Dubai this February when I asked him if opting out of the opening Swiss defence had been a tough decision: “No, it wasn’t a difficult decision. I have played for so long, and I think by winning it I can finally do whatever I please, to be quite honest. It’s been a big burden for me throughout my career and one of the things that have caused more difficulties in my life than many other things, I must say, because I always feel there is so much guilt put on you from the Federation or from the ITF. So I’m happy I was able to finally tick that off.”

Asked if that meant retirement from the Davis Cup, though, he added: “No, I didn’t say that.”

Sure enough, when push came to shove, he was back, and played all three rubbers, but he again made it clear that his Davis Cup career is nearing its end.

“The idea was always to win it once,” he told DavisCup.com. “I see this tie in isolation. Next year is an Olympic year: The summer will be very long and packed with highlights. It’s all a question of priorities. I can’t play everything and of course if I do play Davis Cup other things have to drop out.”

Federer is at a stage in his career where, unlike Hewitt, he can still contemplate hitting the few remaining targets—Olympic singles gold or an 18th Major, perhaps.

But make no mistake: Whether or not he ever plays the tournament again, Federer, as much as Hewitt, has earned that Davis Cup “Commitment Award.”