Marianne Bevis looks ahead to a packed weekend of Davis Cup tennis, with a host of top names in quarter-final action 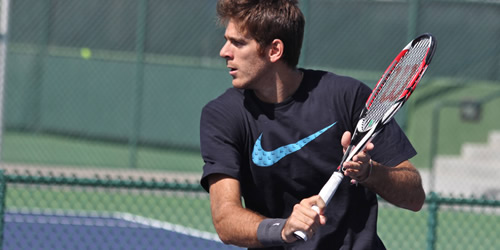 Easter 2012 holds a unique position in the tennis calendar.

This year, it is the bridge that takes the players from three full months of hard-court competition—including the first Grand Slam and the two biggest Masters of the year—to the warm, sunburnt orange of sliding feet, stained ankles and Mediterranean temperatures. The clay season is here, a segment with three Masters that culminates in the small but perfectly formed Grand Slam, the French Open.

How seemly, then, that the very competition bridging the two seasons—the quarter-finals of the Davis Cup—should, for the first in its history, be entirely played out on clay.

In a packed holiday weekend, the best nations in the world, ranked one to eight, will battle for a place in the semi-finals. Only two of them, Austria and Argentina, have not won before and Argentina will be bidding for its first victory after four times reaching the final—including last year.

Argentina lost to Spain in December, as many have before them. The Spaniards have dominated the last decade of Davis Cup competition with five victories and a runner-up place since 2000. This year, however, they are without their star player, Rafael Nadal, who confirmed before the season began that he would not play in the competition this year.

2012 is an especially intensive year, with the Olympics slotted into the late summer schedule, and the top players—the ones who invariably go deepest into tournaments—are all keeping a weather eye on their schedules to avoid overplaying and injury.

Nadal was clearly a very tired man at the end of the 2011 season, as was the man who beat him at almost every turn along the way. Novak Djokovic cut a swathe through the tour, winning 70 of 76 matches, five Masters and three Grand Slams.

By the World Tour Finals, he was sore and exhausted and, with his focus squarely on new titles this year—the French Open and Olympic gold would bring him several special records—he is leaving Serbia’s Davis Cup campaign in the capable hands of world No8 Janko Tipsarevic and No26 Viktor Troicki.

Andy Murray, too, is not involved in the GB Group 1 tie against Belgium and Roger Federer’s Switzerland lost to the USA in the World Group first round and will not play again until the September’s play-offs.

The top-four man aside, however, the very best of men’s tennis will be on show. Nos 5 to 14 will all don their national colours—all except No9 Mardy Fish and No13 Gael Monfils who were both last-minute withdrawals with illness and injury. And by chance, their combined absence has levelled the playing field in what is the most anticipated contest this weekend between two of the Davis Cup’s most successful countries, France and the USA.

The rivalry between these two teams is one of the oldest in the competition’s history, dating back to 1905. Since then, they have met 15 times, with the USA holding the smallest of leads, 8-7. Only twice in that time has the visiting team come away with the win, so the French will relish the home clay in possibly the most beautiful tennis venue in the world, set in the hills above Monte Carlo.

The runners, riders and venues

France (4) v USA (7), Roquebrune-Cap-Martin, France, outdoor clay
France is joint-third on the all-time list of champions with nine titles, most recently in 2001, and has been runner-up on seven occasions. However, the USA is the most successful nation in Davis Cup history—champion on 32 occasions.

Despite the loss Monfils, French captain Guy Forget could still select from No13 Gilles Simon or No18 Richard Gasquet. The nod has gone to the fully-fit Simon, Gasquet feeling he may be unable to compete over five sets on clay due to a niggling elbow injury.

Fish’s place has been taken by the fast-rising teenage talent, Ryan Harrison, but the current star of the side is John Isner, who might not look like a clay court player, but he defeated Federer on the indoor clay away from home in February and pushed Nadal to five sets in the first round at Roland Garros last year.

The doubles rubber could prove crucial and, although the USA is fielding the reunited Bryan brothers, France also has a great pairing in Michael Llodra and Julien Benneteau.

This time, No5 Ferrer is back and supported by No12 Nicolas Almagro, who has 22-7 win-loss record this year.

Austria, whose best performance came in 1990 with a semi-final finish, has reached its first World Group quarter-final in 17 years with a team led by world No22 Jurgen Melzer. Almagro’s role could be key: He is in good form and full of confidence, but Melzer beat him last year, at the same venue in the Monte Carlo Masters.

Czech Republic (5) v Serbia (2), Prague, Czech Republic, indoor clay
This is the 11th meeting between the Czech Republic and Serbia, each side holding five wins. The last meeting, the 2010 semi-final, went right to the wire with Djokovic and Tipsarevic pulling Serbia back from a 2-1 deficit on the final day.

On home soil, the Czech duo of world No7, Tomas Berdych and No24 Radek Stepanek will this time hope to take advantage of the absence of Djokovic.

Argentina (3) v Croatia (6), Buenos Aires, Argentina, outdoor clay
Argentina and Croatia are meeting for a third time, both previous encounters also coming in the quarters, in 2002 and 2006. Both also came down to the smallest of margins, with Argentina winning both in the fifth rubber. However, Croatia has done what their opponents have failed to do: win the title—the first unseeded nation to do so—in 2005.

Juan Martin del Potro returns to the Argentina team after missing their victory over Germany in February. David Nalbandian’s singles performance in that 4-1 win, together with a surge of form that took him to the quarters of Indian Wells, has earned him the other singles role over the higher ranked No21 player, Juan Monaco—though Monaco remains in the squad.