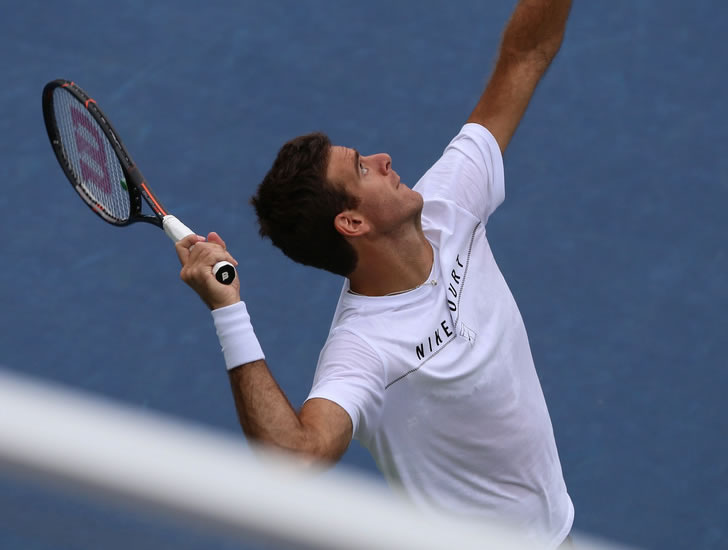 Juan Martin del Potro is still in the hunt for a place at the ATP Finals Photo: Marianne Bevis

There is a real tension about the men’s tennis tour as Europe heads deep into autumn, as the clocks retreat by an hour, and as daylight gives way to evening darkness.

It feels as though this sport that is so redolent of sun and summer and heat, of grass and of clay, of the shimmering, baking heat of hard courts of Australasia and North America, should already by hibernating until tennis emerges from its indoor residence for South America’s red dirt, Dubai’s desert, and the United States’ famous sunshine double in Indian Wells and Miami.

Not a bit of it. There are big points on the line, points that could still earn one of the biggest prizes on the men’s tour, a place among the elite eight at the World Tour Finals. And while some have already ticked the rankings box that guarantees their place at the O2 in London, a large handful continues to compete for the remaining two places, plus two reserve spots. It is a prize worth the winning, one of the best experiences in tennis outside the four Majors.

All of which makes the unfolding draws in the penultimate week in which qualification can be secured especially important.

As many as eight men could still make the cut after the ATP500s in Basel and Vienna and the culminating Masters of the year, Paris Bercy. And it so happens that three of those eight are in Sunday’s finals, and thus able to pick up an additional 200 points to their cause.

The fourth? Roger Federer, already qualified at second in the Race, was in the final mix for the eighth time this season, and had already won six out of seven of those previousfinals—the only loss coming at the Montreal Masters. But though he need not concern himself about London, there are other milestones and match-ups that may occupy his mind.

He seeks a record eighth Basel title, a tour-leading seventh title this year, a 95th career title, which would move him into an Open-era second place behind Jimmy Connors, but perhaps more significant than any of these would be those extra 200 points—to close the gap on Rafael Nadal. For against the odds, after Federer came back from a six-month injury absence ranked No17, and then bypassed the entire clay season, the Swiss is now in contention for the No1 ranking by the end of the year.

His form thus far, in the tournament where he has already reached the final a dozen times, was up and down. Against Frances Tiafoe, he was impressively brisk. Against the less conventional Benoit Paire, he blew hot and cold, and benefitted from wayward tennis by the Frenchman. Then Adrian Mannarino, a leftie with flat power, great touch around the net, and nimble footwork, threw Federer out of rhythm for the first half of the match, and took a set from the home favourite.

The Swiss afterwards admitted that he needed to bring his best to court from the first point, and unfortunately for David Goffin, one of those men within touching distance of London, the Belgian was his victim. Federer produced his best tennis of the tournament thus far, in a glittering display of shot-making that downed his 11th top-10 player of the year for the loss of just three games.

Goffin, so light on his feet and clean in his strike and placement of a tennis ball, held off a long challenge in the second game, but succumbed in the fourth and the sixth, 6-1, in just 26 minutes.

The second set was little better—not that Goffin played poorly but rather Federer had the bit between his teeth, and broke immediately. Goffin got on the board, 1-2, after an arduous third game, but he would win just one more, as Federer notched up another break in the seventh and served out the match, 6-2, in a tidy hour, 20 winners to the good, and winning 21 of 23 of first serves.

But the Basel final will bring an altogether different challenge in the shape of Juan Martin del Potro, who is the only other man since Federer’s residence began in Basel almost 20 years ago, to have won the title twice—and on both occasions against Federer.

The Argentine, whose campaign has picked up with a vengeance since also beating Federer at the US Open in September, is one of Federer’s most challenging opponents, and he asserted that form and fitness with a straight-sets win over defending champion Marin Cilic, 6-4, 6-4. So Federer will hope that he can reproduce the form that took him past del Potro, albeit still in three sets, in the Shanghai Masters semis.

In Vienna, both men with hopes of a London finish also advanced to the final. Jo-Wilfried Tsonga has been beating substantial opponents this week after also winning in Antwerp last week, among them top seed Alexander Zverev, #NextGen star Karen Khachanov, and the dangerous veteran Philipp Kohlschreiber in the semis, 7-6(4), 7-5.

That takes Tsonga from 22 in the Race less than fortnight ago to No15—though he is effectively several places higher because of the absence with injury of a number of top-10 players.

With the big points of the Paris Masters still to come, the Race could go right to the wire. So yes, the evenings may be darker, the temperatures cooler, but half a dozen bright sparks remain. Which of them will make it all the way to the finale in London?

Race to London: Paris worth 1,000 points to champion next week: 10 points for reaching the second round have already been added to the following, who all have first-round byes.