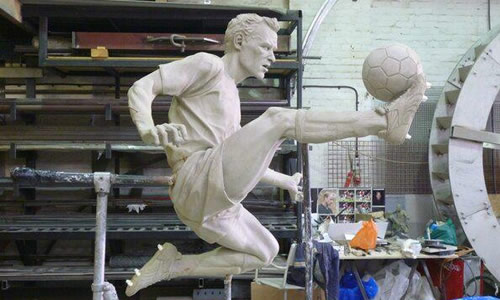 This photograph was posted on the internet this week

Dennis Bergkamp admits he was “honoured” to discover that Arsenal are to unveil a statue of the Dutch midfielder outside Emirates Stadium.

A photograph of the statue under construction in an artists’ studio emerged on the internet earlier this week, with the club confirming on Thursday that they hope to have it in place by the start of next season.

“First of all, I am honoured that this is going to happen,” Bergkamp, who scored 120 goals in 423 appearances for the Gunners during his 11 years at the club, told Arsenal’s website.

“It makes me very proud. Everyone knows that I love Arsenal and that I had a fantastic time at the club.

“For me and my family it was an important period in our lives. Next to that the people were great, the team was amazing and we had a lot of success over the years.

“I will do everything I can to be there when it will be unveiled. It will definitely be a special moment for me which I don’t want to miss.”

And Arsenal chief executive Ivan Gazidis added: “It will be a fitting tribute to Dennis’ huge contribution to the Club that a statue will be on display outside Emirates Stadium in the near future.

“Dennis’ quality and style of play will never be forgotten. He is a true legend of Arsenal Football Club and it’s great to think that so many Arsenal supporters and visitors to Emirates.”

The Gunners have already unveiled statues of Herbert Chapman, Tony Adams and Thierry Henry outside their home ground.

Woodward: I could sense ‘greatness’ in young Bale and Walcott