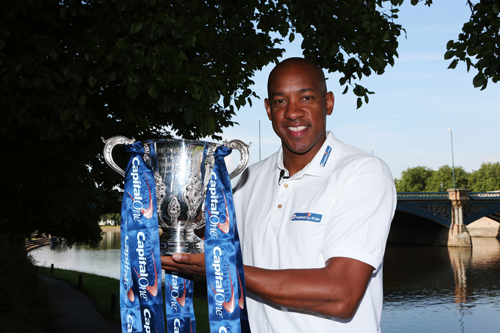 Dion Dublin believes Manchester United will get back to winning ways next season, with the Capital One Cup providing Louis Van Gaal with the perfect chance to do exactly that.

Despite lifting United to fourth in his first campaign at Old Trafford after they finished three places lower with David Moyes in charge the previous year, the jury is still out on whether Van Gaal’s debut season in the Red Devils hot-seat can be classed as a success.

With big-money signings Angel Di Maria, Radamel Falcao, Anders Herrera, Luke Shaw and Daley Blind all joining, fans could be forgiven for expecting much more than just scraping back into the Champions League.

He [Van Gaal] will be a success long-term, if you think of what you need to be a manager at a club like Manchester United, he ticks most of the boxes

Although the arrivals continued to flood in, Van Gaal still relied heavily on the likes of youth prospects Tyler Blackett and James Wilson as he stumbled around for the perfect starting XI and formation.

While two seasons without a trophy might not be a crisis for most clubs, for United it definitely is as they look to rid the club of the shadow of Sir Alex Ferguson.

But Dublin – who scored three goals for Man United after arriving for £1m from Cambridge United – believes next season is the one where the Red Devils put themselves firmly back on the map.

“Manchester United will be back, they will win something this season,” said Dublin, speaking following the Capital One Cup Round One Draw.

“For them to go without a trophy for this long – it sounds stupid but for this matter of months – it is unheard of.

“I do feel that Louis van Gaal will start to get the players that he wants in, he’s bedded in last year and knows what it’s all about.

“Now it’s down to him to dig deep into his experience, and do things a little bit differently to take Manchester United back to where they were with Sir Alex Ferguson.

“I think he will be a success long term, if you think of what you need to be a manager at a club like Manchester United, he ticks most of the boxes.

“He’s been very successful, he’s got great knowledge of players, and I think it will all come to the fore this year and winning the Capital One Cup will be great for Manchester United.”

While Dublin believes the Capital One Cup proves United with the perfect opportunity to add to their trophy cabinet, the former striker expects a number of Premier League clubs to be in the same boat.

Brendan Rodgers has come under intense scrutiny after leading Liverpool to sixth last term, with a trophy the only thing capable of easing the pressure he is under next season.

And with Mike Ashley promising to sell Newcastle United once the club wins something, Dublin believes Steve McClaren could give the majority of Magpies fans exactly what they are wishing for.

“I think Newcastle have thought about this appointment,” he added. “I was surprised to see Steve leave Derby but Newcastle are one of the biggest clubs in the Premier League and they now have one of the best coaches in the country.

“You can’t be at Manchester United for so long, be so successful, and become a poor coach overnight. He’s not, he knows the game well, he’ll be able to manage that football club, no problem. “He just needs the backing of the people above him, for them to take this competition seriously – but he’ll definitely want to win it.

“For them to get anywhere near the Capital One Cup final is something he will be looking for, but he’ll have demands on his head as well – he can’t afford to disregard any competitions – to go as far as he can in every cup.”

But for Dublin, the magic of the Capital One Cup is that anyone can dream to have a day out at Wembley – something Sheffield United proved last season as they fell just short of the final.

“I’m hoping we can get some more excitement as we have had over the past few years, and there are some interesting fixtures,” Dublin said.

“This is a great opportunity for football clubs to make a name for themselves, get a bit of silverware and make a few quid as well, especially if you are a smaller club.

“Over the past few years the Capital One Cup has thrown up lots of surprises and lots of goals and it has unearthed a few little gems when it comes to footballers.”

Dion Dublin was speaking following the Capital One Cup Round 1 Draw on behalf of Capital One – the credit card in your corner. Visit facebook.com/CapitalOneUK