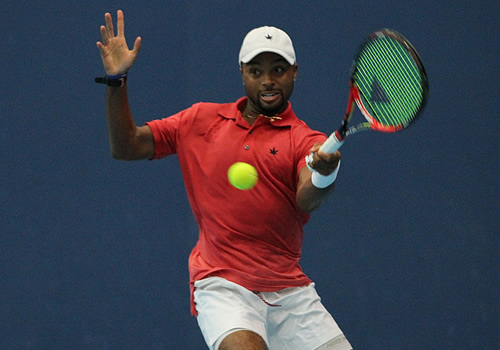 Thursday’s opening match on St Jakobshalle’s unpromising second court—no Hawkeye, and spectators ranged along one side of what would pass for a practice court in some indoor venues—became the site of a gripping, surprising and crowd-pleasing contest that proved ranking and form do not mean everything when it comes to tennis.

The Swiss Indoors No 4 seed, the big, calm, powerful Kevin Anderson, was favourite to beat the unpredictable, often temperamental No48-ranked Donald Young. After all, he had done so in five of their six senior tour meetings. Reading between the lines, though, Anderson’s pre-Pro time in the USA threw up three losses to Young on the Challenger circuit.

And reading between more lines, their last two matches had been on a knife-edge, the last a three-set win for Anderson, the one before a three-setter to Young.

But the South African with strong US ties—he married the American he met at university there and now lives there—was undoubtedly the form man, for 2015 had seen him continue his sure and steady rise.

Making his way into the top dozen, though, was just one first for Anderson in 2015. At the US Open, he reached his first Grand Slam quarter-final. He joined just three other men—John Isner and Ivo Karlovic—in hitting over 1,000 aces this year, and he had already set a new career record of 45 match-wins in a year.

The last of those wins was as convincing as they come against the teenage star Borna Coric, ranked 47, who won just five games. The on-fire Anderson ended the match with 14 aces among 29 winners, and 30 points from 30 first serves.

Young, in stark contrast to Anderson, set records at the start of his career: the youngest male to win a Grand Slam event—the Australian Open Junior title in 2005, age 15; the youngest year-end World Junior No1. By 2007, still a teenager, he had won his first main tour match and reached the third round at the US Open. In 2011 he reached his first final, and by 2012, he was advancing on the top 30.

Then 2014 brought a turn-around: a first semi-final in almost three years; a return to the top 50 for the first time in over two years; the third round for the first time at both the Australian and French Opens. This year, he reached only his second final, the first in almost four years, and arrived at his Anderson match with 23 match-wins, and ready to play some impressive tennis.

Not that Young’s talent has ever been in doubt. The left-hander has pace, touch, variety and great speed and movement around the court. And he used very one of those skills to undermine the power of Anderson. In particular, he read and returned the South African’s formidable serve with interest time and again. So a break by Anderson in the first game of the match was cancelled out by Young to love. The American broke again in the fourth game, and again for the set, 6-2.

While Young was working wonders on the Anderson serve, the opposite was not the case. Young’s leftie serve was hard to read, and swung and skimmed wide or rocketed down the middle. Both men tried to work their way to the net, and while Anderson has become highly skilled in attack mode, and deceptively mobile for a big man, Young exposed his opponent’s height ruthlessly with low strikes and sliced angles.

Anderson was increasingly struggling to find his first serve, no doubt the pressure of the Young returning. He managed to break in the fifth game, only to face six break points in the next, the last as a result of a double fault, to level the score again.

In the eighth game, Anderson again had to defend break points, again double faulted, and faced match-point at 5-6. It did, in the end, require a tie-break in a scintillating passage of play. Young took the advantage 5-3, double-faulted; Anderson also double-faulted to bring up two more match points, but Young could not convert. It was 6-6, 6-6, until one final error from Anderson on serve, and Young had the victory, 7-6(6).

He looked delighted and bewildered in turn, but the crowd was in no doubt: This was a worthy win, taken with bold and exciting tennis.

Anderson, this season, has fallen just short of one year-capping landmark, a place at the World Tour Finals, even if he makes a good run at the Paris Masters next week. Here, he began to look weary—a sign of the efforts that have brought so many rewards. Next year, he could well take one more step up the ladder.

Young would soon find out which of two more Americans he would meet in the quarters, the No6 seed John Isner or 23-year-old Jack Sock, who hit a career-high No29 last month.

The 30-year-old Isner, rather like Anderson, began his tennis pro career on the back of university, and boasts even greater height and serving prowess than the South African. But his young compatriot was enjoying a ground-breaking season after missing four months at the start of the year following surgery and family emergencies.

But Sock returned to reach the first two singles finals of his career—though he was already a doubles champion with Vasek Pospisil—winning in Houston and falling one short last week in Stockholm.

Isner had dominated the meetings so far, but Sock’s power, versatility and all-court skill, lived with the big serving of Isner through the first set, and edged the tie-break, 7-6(5) with a fine net exchange.

Sock, who now looked the fresher, took the only break of the match for a 5-3 lead and served it out, 6-3 after just 65 minutes. Remarkably, this will be the first meeting between Sock and Young, a match-up to relish on many fronts.

It’s been, by American standards, a lean time in men’s tennis, but this season, the seeds of recovery look ready to sprout in support of Isner’s solitary efforts near the top of the game. With Sock now in the top 30, Young inside 50, and a third, Steve Johnson, up 14 places this week to No33, maybe things are on the turn.