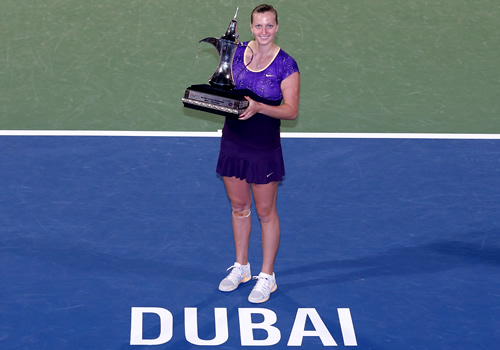 They may have been ranked seventh and eighth in the world, but that aside, there were huge contrasts between the finalists of the Dubai Premier, Sara Errani and Petra Kvitova.

The former is barely 5ft4in, right handed, as famed for her doubles achievements as her singles, and a late bloomer who thrives on clay. All six singles titles—plus the French Open final—have come on the red stuff.

Compact, nimble, with all-court skills and great foot speed, it was not until last year that she really made her singles breakthrough when already the owner of 16 doubles titles. She rose from 27 to No2 in the doubles ranking by the end of 2012, but by 45 to No6 in singles.

Kvitova measures in at 6ft, possesses a mighty left-handed game, made headlines at 21 by winning Wimbledon, and all her nine titles have come on grass or hard surfaces—and with not a doubles title in sight. She hit No2 in 2011 and even challenged for No1 early in 2012, but struggled to retain her form and the pressure that came with such early stardom.

All that said and done, the two women had met three times—all last year, all on hard courts—and all had gone to Kvitova. Could Errani turn the tables?

It certainly did not look that way at the start. Kvitova, who had not dropped a set all week against formidable opposition, took two minutes to break the Errani opening serve, finishing with a scorching crosscourt forehand winner.

Another of the same took the second, 2-0, and the pressure on the Errani serve showed as she double faulted to give the next game to Kvitova, too. It was 3-0 in 9 minutes.

But by 20 minutes in, Errani had got a toe-hold, battling through a couple of deuces to get on the scoreboard, 4-1. Her problem was breaking down the Czech serve and forehand, and she got a little help in that department. Two double faults, from a tally of eight in the match, plus a couple of second serves let Errani take control of the rallies, and a forehand into the net gave back one break.

But the Kvitova forehand kicked back in, just as in the first game, and powered her to a reply break. Again a double fault let her down, and she survived two deuces to hold on for the set, 6-2 in rather longer than she might have expected: 36 minutes.

Neither woman, despite their differences, lacks aggression, and this was key in the opening stages of the second set. Errani upped hers and Kvitova was caught on the back foot as the Italian rushed the net to use her doubles-honed volleying skills to finish strongly.

No breaks of serve for Errani this time, as she went for the net even on return of serve to force a growing number of errors, including another Kvitova double fault, for the first break. The crowd became increasingly vocal, especially on behalf of the bold tennis of Errani, and the Italian soon had a 4-1 lead.

With the Kvitova arm looking tense and tired—she tried to shake it out several times—Errani took full advantage, broke again with some aggressive returns of serve and held to take the set, 6-1.

She was eager to keep the momentum, bouncing at the baseline long before Kvitova was ready to resume for the third set.

Serving in the third game, Kvitova came under pressure again, facing 0-40, but with a string of five points, she screamed herself one to a hold of serve, and it marked a return to her form of the opening set. With a switch in momentum again, Kvitova found her range, Errani fluffed a volley and the Czech made a forehand winner to break. Now clearly buoyed up, Kvitova regained rhythm on serve and forehand and raced through a love hold and to a 4-1 lead.

Things began to move at a blur, now, with another break from an intensely focused Kvitova, and after an hour and 40 minutes and another love hold, she took set, match and her first Dubai title, 6-1.

Errani afterwards talked of how difficult the match-up is on hard courts: “This court is tough for me, it’s very fast for me…I can’t play the game I want to play. She hits the balls very hard, and the points are short.”

Kvitova, conversely, praised her opponent for her aggressive net play: “Really tough to beat her. She was going to the net a lot, a problem for me. It was important to stay positive.” She also explained what was behind the fluctuating serving: “I’ve had trouble with my shoulder all week, and still fighting it…I was just thinking that I can’t give up, and fought for every point. Her missing that volley was important for me.”

Not only does this mark a 10th title for Kvitova, her first since last August, but a reversal of their rankings: She returns to No7—and all while her coach is away on holiday. And while she said she is not at this stage thinking about Wimbledon—“I love to play on grass: it’s always special for me”—it may, if she eliminates some of those errors, be on the minds of some of her future opponents.