Dubai 2013: Roger Federer drops the first set against Malek Jaziri before sealing a 5-7 6-0 6-2 win to reach round two 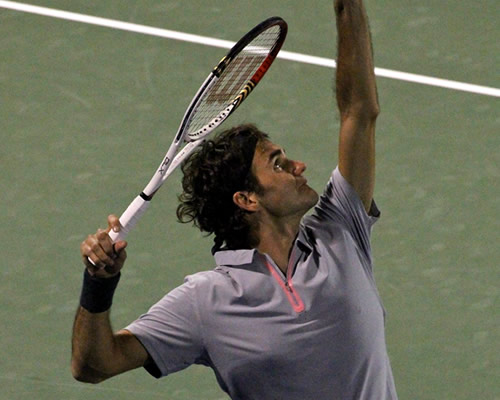 The buzz throughout the opening day at the Dubai Duty Free Tennis Championships was of Roger Federer, five-time winner and defending champion.

He alone of the six top-10 players was in action on Day 1 of this high-powered 500 event that paves the way to the hot and hard Masters just around the corner.

That alone was enough for the buzz. That he packs a punch in star appeal and spends much of time at his second home in this city just adds to his profile. That he was playing wild card Tunisian, Malek Jaziri, the top Arabic player in the world, added some extra spice.

But Federer was joined, on this opening day, by the No7 seed Andreas Seppi against Paul-Henri Mathieu, and No8 seed Mikhail Youzhny against Blaz Kavcic, most of them men of a certain age.

Federer is famously into his 30s, but Mathieu is the same age, 31, Youzhny a touch younger at 30, with Jaziri and Seppi almost there at 29. And during the afternoon there was another 31-year-old, Florent Serra, with the day’s schedule was finished off by Igor Kunitsyn—yes, 31—against Somdev Devvarman, a youthful 28.

Seppi, in the top 20 for the first time in his career, was the first to go through, turning around a 0-4 losing streak against Mathieu with a straight sets win. It was also the Italian’s first match-win in six attempts in Dubai, and his explanation for the double turn-around was simple: “I just tried to play a little bit more solid and keep the ball a little bit more in the centre, not to play so many angles.”

Youzhny had a rather tougher battle in a see-sawing match, coming through 1-6, 6-1, 6-3. The Russian, playing in Dubai for the 12th time, finished runner-up to Federer in 2007 and to Djokovic in 2010. He could meet the latter in the semis here—give or take Juan Martin del Petro—and then Federer in the final.

It was taken as read that Federer would complete the success story for the mature trio of seeds, and when his opponent strode onto court in a heavy knee brace, one felt this could be very quick. The Tunisian, though, was as high as 69 last year but dropped to a current 128 due to that knee. Indeed he had not played a main tour match since last October. No wonder some wag had selected Adele’s rendition of “I’m begging you for mercy” while they warmed up.

And yet there was a shock in store. Federer opened strongly enough, holding to love and earning two break chances in the second game. He then held to love three more times but Jaziri was also serving strongly and scored some notable winners against the Swiss. The points were very short but the Tunisian man played slowly in between, so the match did not settle into any real rhythm. Indeed Jaziri was called for a time violation not once but twice, the second time forfeiting a first serve. It did not seem to affect his delivery and he held to 5-5.

Now a combination of wind, lack of rhythm and trouble picking up his opponent’s patterns took a hold of the Federer serve and a double fault took him 15-40 down. With a netted backhand, the break went to Jaziri, and the centre-court crowd erupted. He went on to take game and set with ease, 7-5.

Would Federer right the ship? Well a double fault took him to 30-30 on his opening serve but he held and suddenly came to life. Helped perhaps by the longest rally of the match so far—a sizzler of defence turned attack—he broke to go 2-0, broke again to lead 4-0 and one last time to sweep the set, 6-0.

And the longer the match went on, the less resistance Jaziri could muster. Clearly suffering from lack of match fitness, the errors began to pile up. He had the chance of an early break, forcing an error from Federer at the net with a drop shot. But the Swiss serving now found its groove and he dropped just three points on serve in the third set. He closed it out, 6-2, with one final break to take 12 of the last 14 games.

Federer talked afterwards of the difficulty of the wind and finding his rhythm early in the tournament.

“I think we were both not playing really well in the beginning. We were both missing a lot of first serves [and] because I couldn’t take advantage, I went from not so good to really not so good—then he got better naturally, which I was hoping to do.

“It was windy out there, so the more you’re trying to play safe, sometimes the worse it gets, the more predictable you become and the harder it is to go for it…It’s not so easy in the first round to come out firing, you know.”

He went on to talk about the problems of playing an unknown quantity, especially one he is expected to beat with ease:

“Yeah, I heard he didn’t play a match yet this year. I think that also played on my mind, knowing that he has this huge knee brace, tape, not having played…Yeah, gotta win, right?

“If you’re only playing rallies on your own service games, that makes it somewhat difficult. Plus I don’t know his patterns on his serve or from the baseline, if he prefers his backhand down the line or inside out. That makes it difficult just to know what to expect and in the process you become a bit hesitant and then things really become tricky.”

They certainly did look tricky for a while, but with three sets and not too much time on court, this puzzle-solving workout may have helped him prepare for what lies ahead. For down the road lies another pair of players rather partial to fast courts like these.

Jo-Wilfried Tsonga and Tomas Berdych both begin tomorrow, along with the other big seeds in the tournament, del Potro and Novak Djokovic. It promises to be big-hitting day.