Dubai 2014: Roger Federer comes from behind to beat Novak Djokovic and reach the final 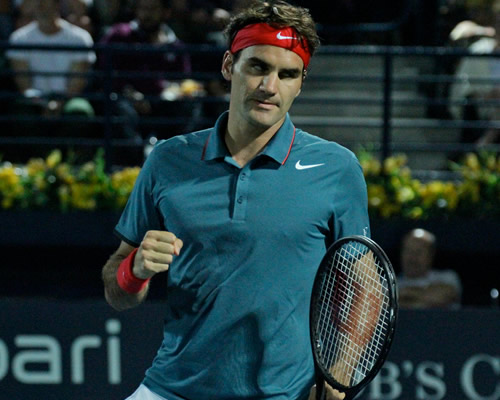 The semi-finals of this starry Dubai tennis tournament featured both the men who contested the final last year.

In the first match, the big, in-form Czech Tomas Berdych lined up against the German Philipp Kohlschreiber, a man who had beaten the 6ft 5in world No6 only once in eight meetings, and that back in 2009.

The second match featured defending champion Novak Djokovic, who beat Berdych in straight sets. On that occasion, Berdych had narrowly beaten Roger Federer in the semis, coming back from a set down to steal the match 3-6, 7-6, 6-4. This time, it would be Djokovic who faced the Swiss in the semis—a match for which the Dubai tournament’s strap-line was clearly designed: “Stars will collide”.

With nine Dubai titles between them in the last 11 years, Federer and Djokovic have also put together some of the best tennis statistics of the decade: respectively 17 and six Grand Slams, six and three WTFs, 302 and 101 weeks at No1. The 32-year-old Federer leads on all counts but the 26-year-old Serb has been steadily edging up all the leagues.

The last year, too, saw clear water between them in their head-to-head and in the rankings.

Federer currently holds 16 victories to Djokovic’s 15—one of the most played and closely contested rivalries of the current era—but the Serb won all three of their matches last year. And looking at their meetings since the start of Djokovic’s remarkable 2011, when he first surged to No1 with 10 titles including all the Grand Slams except Roland Garros, he has won nine of their 12 contests.

But it is the disparity in their current rankings that has brought about a semi-final battle rather than a final. Just a year ago, Djokovic and Federer were ranked Nos 1 and 2 in the world, but after suffering from back problems during much of 2013, Federer’s ranking dropped to an 11-year low of No8. Nevertheless, the Federer who began 2014 looked closer to the old model.

With a new racket in his hand and an inspiring coach, Stefan Edberg, in his corner, he reached the final in Brisbane and beat Jo-Wilfried Tsonga and Andy Murray to reach the semis of the Australian Open. Now in his home from home in Dubai, he looked relaxed, lean and eager, but he recognised only too well the threat of the Serb:

“We’ve played each other everywhere and all the surfaces, so I think we know each other very well. I think we always play the match-up very well because we play explosive, aggressive tennis, so there is always some shot-making going on.”

And then he summed it up: “One match, best of three sets on a court like this, it’s a bit of let’s see what happens. We both know that, and I’m looking forward to the match.”

He was right on all counts, not least that it would take all three sets to determine the winner in what lived up to all the pre-match hype.

First it was Djokovic in the ascendancy and, just as in Federer’s last two matches, the Swiss was broken in his opening service game. Djokovic then drew four consecutive return-of-serve errors from Federer to take a 3-0 lead.

At last Federer seemed to find his stride and took his first game with four serve and serve-and-volley winners, and he promptly earned a break-back point. But Djokovic looked calm and ominously solid across the baseline. He attacked the Federer backhand and held for a 4-1 lead, but again came under pressure as he attempted to serve out the set, 5-3. Once more he withstood two deuces, serving clutch on the key points, and took the set, 6-3, in just 35 minutes.

The crowd was already hugely vocal, with the strong Serb contingent roaring their man on and perhaps three-quarters of the stadium chanting “Roger, Roger” for all their hearts were worth.

They roared all the more when he faced break point in the fifth game of the second set. It proved to be a scintillating game, with two outstanding volley exchanges, Djokovic showing razor-sharp reactions, and then able to play a killer lob.

Federer survived and his level of play was clearly rising, his movement and anticipation helping to contain Djokovic, and he attacked again and again, even on the Djokovic serve. The Serb went 0-30 down in the sixth game and then, to add a touch of drama in this desert of a venue, rain drops began to fall.

Fortunately the players resumed after a few minutes, but Djokovic netted a backhand to offer up three break points and Federer pounced on the third on the stroke of one hour.

Two more holds of serve and Federer had levelled the match, 6-3, closing out with a love service game.

With Federer at his dangerous attacking best, but also defending soundly, an edgy Djokovic double faulted on break point in the opening game of the final set but, as he has done to so many opponents before, he focused hard and hit back.

Staring at two break points, this resurgent Federer recalled the Swiss of old who appeared always to have ice in his veins in tense moments. He aced twice and withstood a battering on his backhand wing to hold, 3-1, and not content with that, pressed hard to earn four deuces and two break points. With one of the shots of the match, a running forehand cross-court winning pass, he broke again.

But Federer had been in this position against Djokovic before. The most memorable occasions were two consecutive US Opens, in 2010 and 2011, when Federer held the match in his hands only to lose in five sets.

Here again, Djokovic was suddenly 15-40 up with two break points, but Federer was not for turning. He took five straight points for what must have been one of his most satisfying victories in a long time.

This was had been free-flowing, all-court, aggressive tennis, and it was to that that he attributed his success:

“I think I was able to play a bit more aggressively as the match went on. He got the crucial first break, which is always big when top guys play each other, and he’s better than anybody with the lead. I knew I was in a bit of trouble and not looking good at all, because he has a tendency to really run with it and play more freely on your serve. He plays very dangerous.

“It was just a matter of trying to play consistent but remain aggressive. Sometimes being also overly aggressive to see if it works. If it doesn’t, then you can always pull back a little bit. Clearly it was close, but I think I got the right balance, just the right balance. Then I started to serve very well, something I haven’t been able to do this week. So I’m just very happy I was able to deliver that.”

Federer now cranks up the pressure as turns his attention to winning his sixth Dubai title—and he will meet the man who beat him here in last year’s semis, Tomas Berdych.

The Czech was put on the spot to pick whether he would prefer to play Djokovic or Federer in the final, and he finally plumped for Federer. He had, after all, beaten the Swiss not just in Dubai last year but in their previous meeting at the US Open.

If he watched any of tonight’s semi-final, he will know there could be another meteoric collision.