Dubai 2014: Juan Martin Del Potro suffers an early exit as the No2 seed is forced to retire with a wrist injury in first-round match 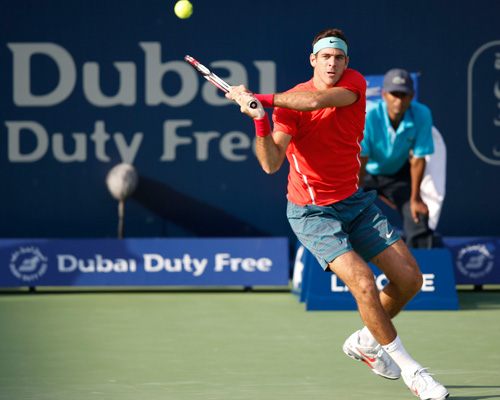 The opening day of tennis in Dubai began elegantly enough, and with just the right amount of star appeal to ease everyone into this high-power tournament.

Five-time champion Roger Federer headlined the evening session and obliged with an hour-long victory that had just the right amount of attack, touch and absence of stress.

But come Tuesday, the scenery was quite different. The big guns were out in force, all three top seeds playing one after the other, neatly rounded off by the late arrival from the Marseille final, No5 seed Jo-Wilfried Tsonga.

The day session was opened by last year’s losing finalist, No3 seed Tomas Berdych while the headline evening session brought top seed, world No2 and defending champion Novak Djokovic centre stage, returning to action for the first time since losing in the Australian Open quarter-finals.

But perhaps the most eagerly-anticipated match of the day was scheduled in between these two and featured the No2 seed, the huge—and hugely popular—Juan Martin del Potro.

My wrist is hurting a lot and it was really tough to play today and I tried everything, but it’s very difficult to play in these conditions, playing slices—I cannot be the player what I would like to be

He was due to play a local favourite, Indian wild card Somdev Devvarman, who made a dramatic rise in the rankings this month from 103 to 78, very close to his career-high of 2011. He did it on the back of three Challenger events on home soil during the last three weeks, reaching the semis of two and lifting the title in New Delhi last week.

As luck would have it, he had played del Potro only once before, and it was in the second round here last year. Then, he put up solid hour-and-a-half fight in losing 6-4, 6-4, firing five aces to Del Potro’s two.

The two metres of Argentine power went on to have another top-quality season, reaching the Dubai semis for the second time, taking Rafael Nadal to three sets in the Indian Wells final, playing the match of Wimbledon against Novak Djokovic in the semis, and ending the year with four titles. He was also ranked No5 for the first time since the aftermath of his US Open victory and career-disrupting wrist surgery.

But the reason for the anticipation was not the prospect of a rematch between the two, it was to do with the del Potro wrist, this time the left one. Ever since the first round of the Australian Open, he had carried a problem. He fell unexpectedly early in Melbourne in his second five-setter of the tournament, and hastened back to his doctor for an assessment and treatment.

He made his return in Rotterdam to attempt a defence of his title, and was, of course, quizzed about his injury—and the feedback was not entirely encouraging. His wrist was still sore, his left arm weak from under-use, and his backhand was compromised, but he had been given leave to play by his medic.

He lost in the quarters, and no sooner had he arrived in Dubai—where he flew direct to get as much training and practice as possible—than the questions began anew. And still, the always-quiet demeanour of del Potro was just a little more subdued than usual.

“The wrist is getting better, but I’m still not feeling confident to hit my backhand 100 per cent. I need time to work, to get muscle again in my arm. I feel like it hurt when I hit my backhand and that’s hard to get out of my mind. Also I’m training hard, twice a day, trying to focus on my serves and forehands and the rest of my game, but in the end I can’t play 100 percent without my backhand.”

Interesting, though, was his determination—with the support of his doctor—to play as much as possible, and he discarded suggestions that such a tactic may exacerbate the problem. Indeed, he signed up to play doubles—a rare decision for the Argentine—and won his first match with partner Radek Stepanek.

He would not, though, be drawn on defending his semi-final points here, let alone his chances of winning the title:

“All the players here are tough to play. It will be a challenge, how I feel with my wrist and my backhand. [It’s] an opportunity to start to improve my game this season, to play better than in Rotterdam and the Australian Open.

“You also have Djokovic, Federer and other big names favourite to win the title, but I know I have fans expecting me to go far in this tournament and in my country they are expecting a lot from me this season, but I must start here really well. Anyway I’m trying to keep top five, top 10 this year, and then it will be a great season for me, but for now its very important to keep playing and keep training hard with the best players and try to fix my problem as soon as I can.”

Unfortunately, things went from bad to worse for the Argentine. He ground his way through a long and arduous first set of more than an hour, but it was clear that Devvarman was focusing more and more on the del Potro backhand. The Argentine made the occasional top-spin crosscourt strike, but as was the case in Rotterdam, he resorted to a lot of sliced returns.

Nevertheless, he had three break points for the set at 6-5 on Devvarman’s serve, but the Indian played aggressively to win five straight points and take it to a tie-break.

It quickly became clear that Devvarman was in complete control, and he took a 6-1 lead with a long and probing backhand exchange, and served out to rapturous applause, 7-3.

It also quickly became clear that del Potro was in trouble. His bandana was off, his head was bowed and he looked close to tears. The physio arrived but there was no hope. He retired, and was far from optimistic when he came to press soon after.

“My wrist is hurting a lot and it was really tough to play today and I tried everything, but it’s very difficult to play in these conditions, playing slices—I cannot be the player what I would like to be.

“It’s hurting all the time… and I have been in contact with my doctor all the time. He’s trying to keep me motivated to keep playing, but I know what is my limit: Today was enough.”

He was heading straight back to the United States, where his doctor is based and where his next tournament is played in a couple of weeks. It’s a big event, the Indian Wells Masters, and del Potro would neither comment on playing nor on what treatment might lie ahead.

It had looked for certain that Devvarman knew of del Potro’s physical limitations, but he insisted he hadn’t worked it out until midway through the first set. His win, by whatever means, will see him play a fellow wild card in the second round. In another popular victory for a—relatively speaking—home player, the 144-ranked Tunisian Malek Jaziri scored a win over Igor Sijsling.

So it was a day of good news and bad news for the tournament that left one of its biggest names on his way to an uncertain few weeks in the States.

What of the other big men? No such shocks surrounded the progress of Berdych or Djokovic. The Rotterdam champion scored his 13th victory in his last 14 matches by beating qualifier Marius Copil, 6-3, 6-4. Later on, Djokovic looked very comfortable in beating Denis Istomin, 6-3, 6-3, to score his 24th win in his last 25 matches in Dubai.

As for Tsonga, well this was stunning stuff, even aside from tournament tiredness and jet lag from Sunday’s final in France. He took only 72 minutes to beat Victor Hanescu, 6-2, 6-4, in a display of shot-making and touch to lift the heart. He will next play Nikolay Davydenko.

And in one other interesting clash, between two 35-year-olds, veteran Czech Radek Stepanek beat American Michael Russell, 5-7, 6-3, 6-1 in just over two hours to set up a clash against Federer.