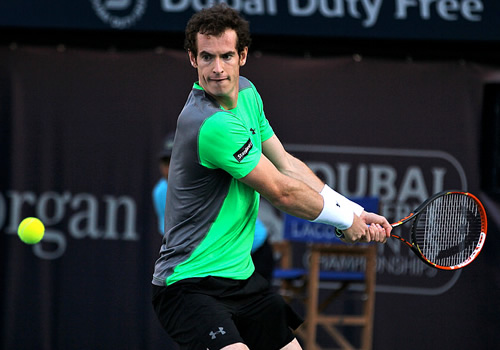 Andy Murray must feel as though a certain big man from Luxembourg has been following him.

A fortnight ago in Rotterdam, he was teamed up with Gilles Muller on the practice court, only to find out that he was also lined up to be a last-minute doubles partner, too. Before the allotted hour, though, Muller pulled out of their opening match with sickness.

Both men would make the quarter-finals in the cool, Dutch ATP 500 tournament, but this week, both were back in action at the altogether warmer outdoor 500 in Dubai. It would be the first time Muller had made the trip to this demanding tournament—and as luck would have it, he was drawn against Murray in the first round.

It was not as easy an opener as their respective rankings might suggest, especially given that a year ago, Muller was ranked outside the top 300. For the 31-year-old, 6ft 4in, left-handed power player was enjoying one of the best years of his career.

Muller opened 2015 by reaching the quarters in Chennai, then the semis in Sydney, the fourth round at the Australian Open, and quarters in Rotterdam. In every case, he lost to the eventual champion and in the process rose to a career-high ranking of 34 ahead of Dubai.

Murray, who spent the first few days in Dubai thwarted at every turn in his search for a hitting partner, knew he had a fight on his hands, especially as the courts in Dubai are playing fast. Murray commented: “I know Gilles very well. He’s playing very well, and the conditions here are quick which obviously suits his style.”

That style is a big-serving, attacking game with an enthusiasm for taking to the net. And of course, a pacey serve from a left hand can cause even the best players a deal of trouble.

Murray, though, has one of the best return games in tennis, and showed a formidable return to form with his final run in Australia. Despite an earlier-than-planned loss in Rotterdam, he also arrived in Dubai—where he made a final run the last time he was here in 2012—back at No3 in the rankings. And if he could get over the finish line against Muller, the draw should see him relatively untroubled as far as the semis and a highly-anticipated possible meet with defending champion Federer.

The wind that had whipped up a storm of sand during Murray’s early days here was now replaced by warm Dubai sun as Murray took to court on the most packed schedule of the week.

He was preceded on Centre Court by No4 seed Tomas Berdych, followed by top seed Novak Djokovic, and was competing for attention with Federer playing doubles, as well as the tournament’s No7 and 8 seeds on outside courts.

But the crowds were out in force even so, and Murray arrived to a rousing cheer and plenty of flags, both Scots and British.

It would prove to be as difficult a match as he expected. Murray came tantalisingly close to a break in the third game that stretched out over 11 deuces and almost 20 minutes. When Muller needed them most, he found aces and eventually held, but Murray made the breakthrough at the next attempt, converting his only break point from six in the set. 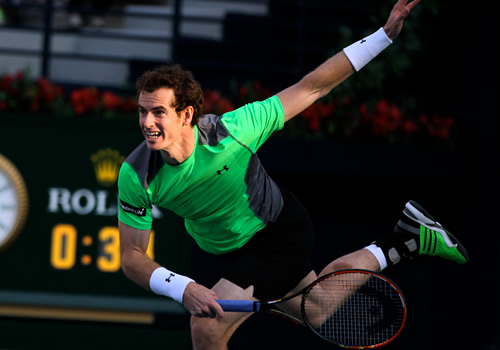 Andy Murray is through to round two in DubaiPhoto: Andy Murray

He would serve it out, just, 6-4 after fighting off break points of his own at 15-40 in the eighth game, but it had taken more than an hour and the sun was already dropping behind the rim of the arena.

Murray seemed now to be in control, especially as his serving gradually improved. He would drop only three points on his first delivery in the second set, took an early break, and served for the set at 5-4, only to face deuce, a net cord and break back from Muller.

It delayed the conclusion by a few minutes, however, and Murray broke again to serve out, 7-5, after an hour and three-quarters of tough tennis.

He was rightly satisfied with his performance after a tricky few days of preparation, and with coach Amelie Mauresmo absent until Indian Wells.

“I feel like I got a little bit unlucky at the end of the second set. He got a couple of net cords in that 5 4 game where I got broken, and I did very well to respond straight away and get the break right back. I thought I played a fairly high quality match.

“[But] I made him work very hard on his service games. That was something I wanted to try to do from early on in the match.”

He went on to confirm that he was feeling very different from a year ago when he was only recently returned to the tour after back surgery in the autumn of 2013.

“Mentally completely different: Much more confident in my body and in my game. There are still things I can do better, but I think even last year if I was playing well I felt like I was still doubting a lot of things. I didn’t have confidence really in my body or in my game… So, yeah, I feel much better at this stage.”

Murray will next play Joao Sousa, who he beat last month at the Australian Open, and in all three other meetings. The man from Portugal has, indeed, yet to win a set from Murray.

While Murray was battling to his win on Centre Court, James Ward was being taken out of the reckoning by Feliciano Lopez. Perhaps not a surprise, since the 33-year-old Spaniard is enjoying a career-high No13 in the rankings while Ward stands at 108.

The Briton went down, 6-4, 6-4, after defending break points at the last gasp and pressing Lopez to break points in the final game. But after an hour and half, Lopez advanced to a second-round contest against qualifier Marsel Ilhan.