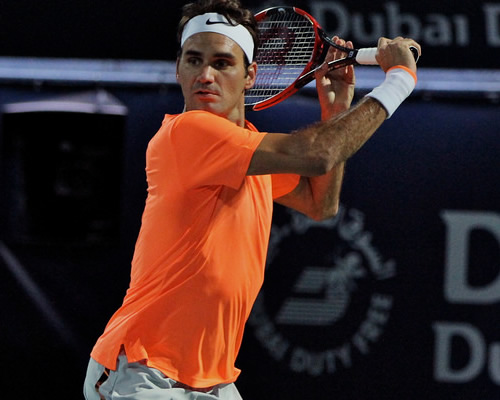 The combined efforts of Andrey Golubev and Fernando Verdasco had thus far failed to score a single win over their second-round opponents, the four-time champion and world No1 Novak Djokovic and the six-time and defending champion Roger Federer.

Indeed out of eight matches between the two pairs, the underdogs had taken only one set, and that was by Verdasco at the World Tour Finals in 2009. What’s more, both Golubev and Verdasco had each only made the second round in three visits to Dubai.

In practice, the hopes of Verdasco were rather more bright than Golubev’s. The Ukrainian’s first round win here was one of only two main-tour wins in the last six months, and since he had played Djokovic at Wimbledon last year—a first-round loss—he had won just five. It’s fair to say that his early promise, back in 2010 when the elegant one-handed 27-year-old reached a career-high 33, had not truly flowered.

Verdasco, though, has always had the power and potential to hit an opponent off the court, a left-hander with a formidable forehand, a former No7 almost six years ago, and owner of six titles. He reached the semis in Quito earlier this month, beat Gilles Simon at the Paris Masters and Richard Gasquet at the French Open and Indian Wells last year. But since a dip outside the top 50 two years ago, his form has blown rather hot and cold.

One thing that may work in Verdasco’s favour was that his first match was played in the same cool evening conditions in which he would face the world No2. Could Federer reproduce the fast, attacking pace of his own first match?

Well initially, it looked not. The air was certainly cooler, and it took the Swiss a few games to really find his groove. Verdasco, meanwhile, carried on where he left off in racing to a quick conclusion, 6-1, against Guillermo Garcia-Lopez. He held the opening game with an ace, and while Federer opened his account with a serve and volley winner, he hit another volley out for break point and then a forehand long to concede the game.

But after dropping those four points, he dropped not another on serve in the set: four love holds in a row.

And stung into action by the early break, and some flashy winners from Verdasco, Federer raced from 4-1 down to take the next five games without dropping a single point, not just on his serve but on Verdasco’s as well: 20.

It was scintillating stuff, and the Federer-adoring crowds in what is his second home of Dubai, cheered not just at the end of points but at single shots within rallies… until the umpire reminded them of due protocol.

Verdasco used the tried and tested method of pummelling Federer’s backhand, but now the Swiss raced and retrieved in long, pulsating exchanges between his flexible right arm and the Spaniard’s jackhammer left-handed forehand. The rallies invariably ended the same, with Federer manoeuvring inside the ad court to finish with a forehand.

Considering how the set began, the speed was now dizzying, and Federer strolled to his chair, 6-4 to the good, after 29 minutes.

It must have been soul-destroying for Verdasco to see his early dominance wrenched away. He did stem the run of points in the first game of the second set to lead 40-15 on serve, only to have Federer reel off four more points to break.

The Swiss blinked in the next game, and Verdasco showed he was still dangerous by breaking straight back and then serving out to love with ace. He took the opening point on Federer’s next serve, too, a run of seven points. He even saved a break point at 2-2, but could not save a second, and that opened the Federer flood-gates again: a love hold, a gutsy love hold in reply from the Spaniard, another love hold from the Swiss and, to finish the job, a final break, 6-3.

It had taken precisely an hour, but it had sent Dubai home happy.

Federer was pretty content, too—chilled enough for a few quips, for some chat about his kit, and of course thoughts on the match: “I think it was a good quality match from my side. I think Fernando played well for spells, but I think I was quite consistent. The two breaks maybe avoidable to some extent, but then Fernando is a shot maker and he takes it out of your racket sometimes. So I’m still very, very pleased the way I played out here tonight.

“I didn’t even know [the run of points] happened until somebody told me afterwards. I remember when I broke him the second time around, I was like, was that a love game? And I think I held 2 love? But then I forgot about it, because all I cared about was trying to stay ahead in the score, focus point for point, serve for serve.

“It’s a great comeback because I did feel that Fernando was hitting the ball well and came out and played very committed, especially with a man of the variety he has on his serve and forehand.”

The Swiss next plays an old adversary, another flair player with a glorious one-handed backhand, Gasquet. The Frenchman saved a match point against No7 seed Roberto Bautista Agut to win 6-4, 3-6, 7-6 in 2hrs 22mins.

Of the encounter with a man whom he currently leads 13-2, Federer said: “I’m looking forward to playing against him. Last time we played was Davis Cup final on that Sunday, in front of that big crowd, and it was a lot of pressure. I think this time is going to be a bit more relaxed going in.

“Yeah, I just love his backhand so it’s always a pleasure playing against him.”

And Djokovic? Well it was as straightforward as the history and stats suggested it would be, a 61-minute cruise, 6-1, 6-2. He will next face Turkish qualifier Marsel Ilhan, ranked 104 in the world, who put out two-time Dubai finalist Feliciano Lopez, 3-6, 7-5, 6-3.