Dubai 2015: Roger Federer sets out for title No7 with 16th Youzhny win 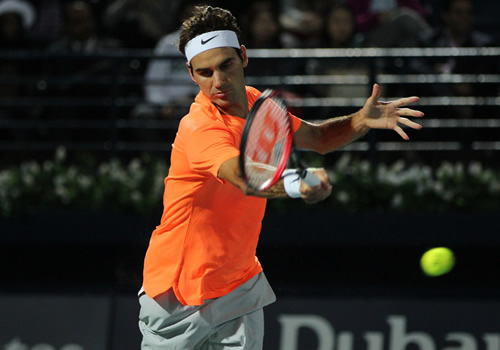 It is one of the longest-running tennis rivalries on the tour, though in truth, ‘rivalry’ may not be the most apt word for the relationship between contemporaries Roger Federer and Mikhail Youzhny.

Since their first meeting on the tour in Stockholm almost 15 years ago, they had played 15 times, and Federer had won 15 times.

Yet that is to disguise the quality of the highly-educated Russian, the father of two who is heading towards his 33rd birthday this summer.

Yes, Youzhny, PhD, winner of 10 career titles and a former world No8, is a family man who has reached at least the quarters in all four Grand Slams, and been a semi-finalist twice at the US Open. He has a single-handed backhand, and his childhood idol was Stefan Edberg, who is now mentor-coach of Federer.

In Dubai, the Russian may have been taking on the six-time winner but he had enjoyed not a little success here himself, twice a finalist, once beaten in three sets by Novak Djokovic, once—inevitably—by Federer.

That first time they met in Sweden, both teenagers, he very nearly won, taking the first set 7-5. He has taken only three sets from Federer since, though if there is a glimmer of hope, it was that one of those was in their most recent contest, a tight final in Halle.

The other factor that may have given Youzhny cause for hope was that fellow 30-something Andreas Seppi was in a similar position when he took on Federer at the Australian Open last month, carrying a 10-0 deficit, and he won. Federer had not played a match since.

The Swiss knew this could be dangerous territory. As he said ahead of the tournament: “There’s a bit more uncertainty maybe going into a tournament after a long break, but you come back refreshed, and it might take one or two matches to get rolling. That’s where you need an OK draw, you just need to fight your way through the first few matches and then hope to play better. Here in Dubai, it’s historically always difficult to play very well from the get-go because the courts are fast….”

Well the short answer was, no. Considering Federer was apprehensive about being rusty after a longer-than-usual vacation, and considering the first three or four games were a bit hit and miss from both men, the Swiss gave his opponent very little time to make an impression.

And if that had been quick, the second set went by in a flash, still no break point chances, just three first serves dropped, and two breaks of Youzhny’s serve.

Federer finished the match with a flourish—a glorious backhand angled touch volley winner followed by his eighth ace of the match for a 6-1 win in only 56 minutes.

Federer had made 27 winners and only 18 unforced errors, but his movement and defence across the baseline was also sharp. In short, he looked in just the kind of form he would hope for so soon in the tournament.

He was quick to point out that Youzhny was not at his best: “I think best of three in a quick court sometimes you just can run away with the score, so that’s where maybe a bad five to 10 minutes can cost you the match.

“I think it was close in that first set. I think we were both trying to find our range. I’m happy I didn’t start to play too careful after it, because it is tough to play here with the quick conditions.

“After that, I think I started to return much better, serve got a bit more consistent, my half volleys were getting better. I was able to get the set and the break, and then that’s when you can bring it home.

“He’s been struggling as of late a little bit. I don’t think he’s gotten the best draws, either, so he’s missing matches. I think I was able to take advantage of that a bit.”

There was some truth in that, but it was a generous nod to an old adversary. They looked a distance apart in the end, though Federer knew that here was a player he had dominated for many years: “[After Australia] the last thing I want to do is lose back to back matches playing careful, but then you cannot leave it up to the other guys sometimes if you are going to win or lose.

“I feel over the years I have won my biggest matches in most tournaments by playing on my terms, and you can’t always do it. It’s difficult to come out and dominate every match, every point, and it’s also hard work always playing aggressive.”

By coincidence, the man who took advantage of that in Australia, Seppi, was next on court and would be tested by an unseeded Richard Gasquet. The winner could face Federer in the third round.

Meanwhile, Federer needs to keep that offensive mindset when he takes on the aggressive game of either Fernando Verdasco or Guillermo Garcia-Lopez in the second round.

In the top half of the draw, the first seed went out. Denis Istomin, currently ranked No65, knocked out No5 seed Ernests Gulbis, 7-5, 6-2, despite the Latvian leading in the first set, 4-1. Gulbis, who had won their two previous matches, has yet to win a match this year.

February landmarks for Karlovic, Simon, Lopez, as Murray returns to No3