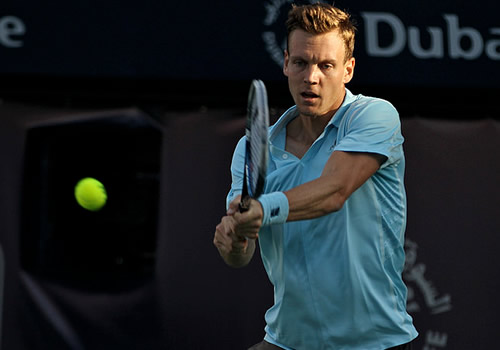 Tomas Berdych admits that he was made to work hard by Simone Bolelli for his place in the quarter-finals of the Dubai Duty Free tournament.

The fourth seed won the first set against the Italian on a tie-break but dropped the second en route to a 7-6 (9-7) 5-7 6-0 win in the second-round clash.

“It was a hard day in the office,” said Berdych after the win. “It was not easy at all and I kind of expected it wasn’t going to be an easy match.

“But then in the end after two sets which were very close, then I took my chances, and started to play finally my game and get a bit more to the rhythm, start to serve better.

“So I need to take the positives from the match, which was definitely the third set, and so that’s good. It’s another win. That’s fine.”

Berdych will take on Sergiy Stakhovsky for a place in the semi-finals of the ATP 500 tournament.

“I think I can expect some more slices tomorrow back again,” he added.

“He’s playing really well last couple of weeks. He’s having a solid weeks, and he’s not going to be easy opponent.”