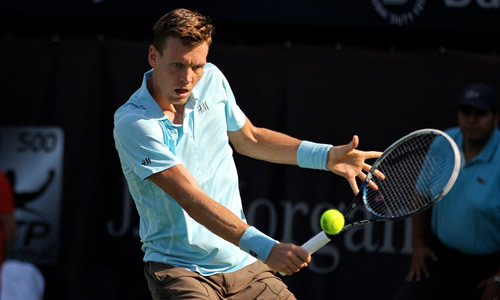 For Tomas Berdych in Dubai, it has been a case of ‘so near yet so far’.

For the last two years, he has been the losing finalist, in 2013 to four-time champion Novak Djokovic, and last year to six-time champion Roger Federer.

If the seedings work out, he could find himself having to beat both champions in a row if he is to convert his great runs here into the title. Should he get to a semi meeting against Djokovic, he would have to score his first hard-court win over the Serb in their 19 previous matches.

If he does manage to climb that mountain, he may be a little more confident about turning around last year’s result. After all, Berdych took the first set against Federer in that final, and beat the world No2 in three sets in the 2013 semis.

And there is no doubting Berdych’s ambition, self-belief or form.

He talked ahead of the tournament of his repeat run to the semis in Australia last month with a mix of disappointment and optimism.

“Of course still disappointed to lose the semi-final but I can still see more clearly what the things are that I need to keep improving, where I need to put my game for the future. But it was a good start… everything was working how I needed, but I just need to keep doing that a little bit longer, not only one set.”

Berdych won a storming first-set tie-breaker over Andy Murray, only to succumb in the next three. But as he pointed out: “To say it is quite easy, but to execute is a little bit more difficult. But it’s good to have a plan and goals and try to chase them.”

Not that the big Czech has been without success in his years on the tour. He turns 30 in 2015, yet he is arguably enjoying some of the best form of what has been a long and consistently high-achieving tennis career.

He has been ranked between Nos5 and 7 for almost three and a half years—though after failing to defend his Rotterdam title, he slipped to No8 this week. He has not been outside the top 10 since he reached the Wimbledon final in 2010, nor failed to reach the World Tour Finals.

Last year, he reached the quarter-finals of three out of the four Majors, including his first semi-final in Australia—and he beat Rafael Nadal this year for the first time in 17 consecutive meetings.

Yet his ambition and work ethic seem undimmed as he gets underway at one of his most fruitful tournaments. He has not fallen before the quarters in Dubai since his semi run in 2011.

Already, he has started 2015 strongly: aside from the semis in Melbourne, he has reached the finals in Doha and Rotterdam, and over Christmas, he recruited a new coach, Dani Vallverdu, in his constant search for a fresh edge.

“I felt that I got to a certain level where… I needed something different, that I needed to get a change if I wanted to get better. It’s nice to be four or five years in a solid position in the top 10, but the years are coming, and this is one of the last times if I really want to change something, if I want to aim for bigger results. And that’s why I decided.”

As far as the semis, too, the draw has started to open up for the Czech before he played his first match: His first scheduled seed, Ernests Gulbis, fell on the opening day. However, his first match was far from easy, the No34 ranked Jeremy Chardy, but it was hard to see the super-fit Berdych failing to reach his 500th match-win in Dubai—he arrived here just two matches short of that landmark.

As might be expected, it took a few games for the No4 seed to settle into the match and find his timing and flow. He broke in the second game but was immediately broken back and they exchanged another break apiece before edging to a tie-break.

Then it was all guns blazing as Berdych raced out to 5-0 and took the set, 7-2, in around an hour.

Now the Czech looked as though he was into his rhythm while Chardy, despite some occasional big serving—six aces in the second set—began to spray errors.

Berdych again broke quickly but this time Chardy could not return the favour. The Frenchman battled through an 8-minute game in the eighth to hold but Berdych made no mistakes in serving out, 6-4, having dropped not a point in 12 first serves for the set.

So it is just one match-win to go for his 500, and he will play Simone Bolelli for that landmark. It is a while since the two played one another, just one Davis Cup win to Berdych since Bolelli beat the Czech on clay at Roland Garros in 2009.

The Italian has been in decent form, beating Milos Raonic in Marseille last week, which Berdych recognised: “He’s definitely the guy that’s playing really well these last couple of weeks. I mean, winning the doubles title in Melbourne, it also gives you a lot of confidence for your singles. So it’s not going to be easy one to play, especially in these fast conditions. That’s what he likes. So I’m going to definitely have to bring my better game and just try to go for it again.”

However, if Berdych does not reach his 500 in Dubai, it would be a big upset indeed.