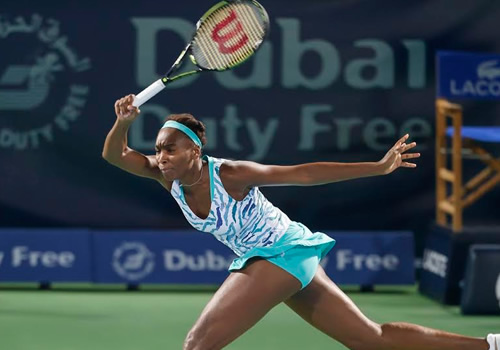 The problems facing Belinda Bencic when she took on defending champion Venus Williams in Dubai this week could hardly have looked greater.

First of all, the mighty Venus, owner of seven singles Grand Slam titles, claimed the latest of her 46 trophies only a month ago. And she is back inside the top 12 for the first time since early 2011 when the great American was diagnosed with Sjogren’s Syndrome.

Williams made history at the Dubai Duty Free Championships last year when she became the first wild card and first unseeded player to win the women’s title, though of course her ranking was largely the result of injury and illness.

What’s more, in winning the title at this high-profile Premier tournament in 2008, 2009, and again last year—a 15-match unbeaten streak—Williams dropped just one set, to sister Serena, in a dramatic 2009 semi-final.

Already this year Williams has gone from strength to strength, beating world No6 Agnieszka Radwanska to reach the quarter-finals of the Australian Open, and beating current No5 Caroline Wozniacki in the final in Auckland. So she arrived in Dubai eager to write her name in the record books again by becoming just the second woman, along with Justine Henin, to win the Dubai title four times.

And she clearly loves the place—and not just as a self-confessed shopaholic! She commented after winning last year:
“Just to be able to be here and compete was the first thing that made me so happy, and then obviously to play well, win the title, and have this wonderful streak here is definitely an accomplishment.”

But what made her first match this year so intriguing was that Bencic is one of the WTA’s most promising young players, voted last year’s Newcomer of the Year after rising 179 places in the rankings to finish 2014 at No33—and at just 17, she is half the age of Williams.

The popular young Swiss was seeded in a Major for the first time at the Australian Open but had already burst onto the scene as the youngest player to reach the quarter-finals of the US Open, beating two top-10 women on the way, since her mentor and fellow Swiss Martina Hingis in 1997.

She had played Williams twice before, and lost twice before, but they had not met since the French Open, when Bencic was ranked No80, and since then, the Swiss had reached her first final in Tianjin.

But here, despite one good win already in her pocket, Bencic looked as overawed and overpowered as their history suggested. Williams surged through the first set with two breaks and almost 70 percent of the points, giving Bencic barely time to react.

It was a stunning display by Williams, reminiscent of her heyday, but Bencic, showed real maturity for her years, dug in for the second set, upped her pace, and took the ball increasingly early. For a couple of games, Williams was on the back foot and Bencic took advantage to break for a 2-0 lead.

Her problem was that Williams’ could draw on so much experience and hitting power. The American broke back and, not content with that, she broke again, though she wavered with two double faults to offer up two break points at 15-40. But Williams then slotted away two big backhand winners, and that glimmer of a chance for Bencic was wiped out.

With the American’s break consolidated at 4-2, she brought up another break chance with that same cross-court backhand and now it was Bencic who double faulted. With 69 minutes on the clock, and 28 winners to 17 errors in her stats, Williams advanced to the third round, 6-2.

Williams’ first win in Dubai this year takes her tally in 2015 to 12 for just one loss, for she diverted to Argentina after Australia to also win two rubbers in the Fed Cup.

And while Venus’s sister may have the Serena name, it is the elder Williams who currently boasts one of the most serene demeanours in the women’s game. Perhaps it should be no surprise considering she wondered back in 2011 whether she could ever be numbered among the elite again. But after Auckland, she talked of her undimmed desire to play, even at 34: “By the time you’re 34 you have a lot of experience and if you can stay in shape, stay fit, can move and hit the ball and don’t have five kids at home then why not?

“There’s nothing holding me back from being here and doing well. Of course I can’t play forever. Someone else has to take the torch at some point. While I’m here I’m enjoying it.”

As are her many, many fans.

A shout-out too is owed another over-30 woman who took to court immediately before Williams, the unseeded wild card Daniela Hantuchova. The popular Slovakian, winner of seven singles titles and a former world No5, reached her first final in almost two years this weekend, going on to win the Pattaya City title.

En route, she saved match points in the semi-final and came from a set down through more than two hours to win the final. She then hot-footed it from Thailand to the UAE, managing around an hour’s sleep on the way, to beat Mona Barthel in two hours 40 minutes.

Now that is staying power.