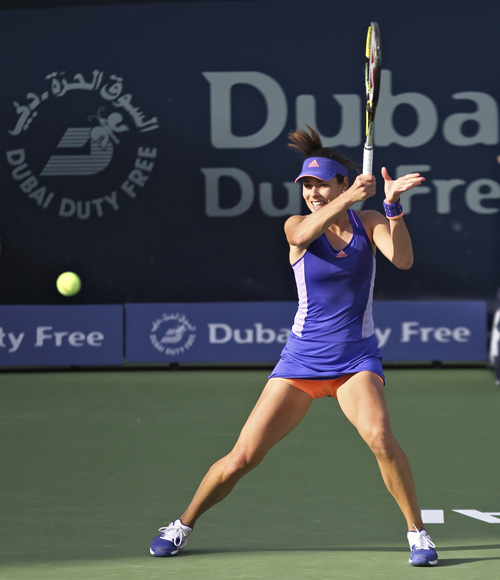 On the day that the Dubai Duty Free Tennis Championships welcomed the top four seeds to court for the first time, a rare rain-storm over this dramatic city that sits astride sea and desert threw a fine schedule into total disarray.

The 14:00 GST start saw unseeded Barbora Strycova pass the finish line, just, from a set and 0-3 down against Julia Goerges, but the No3 seed, Carla Suarez Navarro, who took on the always-dangerous Caroline Garcia on Centre Court, did not have it so lucky. With their match into its third hour and heading to its final-set conclusion, the storm hit—and not just torrential rain but hail, too.

The disruption meant that the feature match of the day between top seed and defending champion Simona Halep and the former world No1, Ana Ivanovic—unseeded here on a ranking of 17—did not begin until 20.30 GST in the evening.

And this year? Yes, she faced top seed Halep, who was also the WTA hard-court match-win leader in 2015.

However, the form that Ivanovic showed in racing past Daria Gavrilova in the first round suggested that her poor form of the season thus far—first-round defeats in Auckland and Sydney and a third-round loss at the Australian Open—had turned. She made the semis in St Petersburg last week, and dropped only one game against Gavrilova.

By the time these two hugely popular players, both with vocal and enthusiastic support throughout the match, took to court, it was cool, with the court still sticky from its earlier saturation. There were heaters and towels deployed at each change of ends, but even so, the conditions seemed to prey on the mind of the tall Serb, and Halep took an immediate break to lead 2-0.

But the standard cranked up after Ivanovic took on an up-beat coaching time-out, and she worked several break chances in the sixth game. She could not convert, but with Halep serving for the set, Ivanovic pounded her forehand to break for 5-5 and boldly saved two more break points as the match went to a tie-break.

Ivanovic lost the first point, but won the next four, and with her 17th winner, took the set, 7-6(2), after almost an hour and 20 minutes.

Ivanovic carried her momentum into the second set, firing four straight winners in the opening game to break to love, and barring a close shave in the fourth game, she broke again in the seventh game and served out the win, 6-2, in some style.

Ivanovic admitted: “Honestly, I’m delighted. It was a great battle in the first set, and she’s such a great player and I really had to raise my game, which I think I did. It was not easy but I’m really thrilled to be through.”

The win takes her to a quarter-final against Strycova, and following the victory of Andrea Petkovic over Jelena Jankovic, 6-3, 6-2, it leaves the top half of the Dubai draw with no remaining seeds.

In the bottom half, unseeded Sara Errani beat Yaroslava Shvedova, 6-3, 6-0, and will next play either 2013 Dubai champion, Kvitova, or Madison Brengle, whose match was rescheduled onto Court 1.

That match, and the close contest between No2 seed Garbine Muguruza and the No21 ranked Elina Svitolina, were yet to be decided as the schedule moved towards an uncharacteristically late Dubai conclusion in the early hours of Thursday.