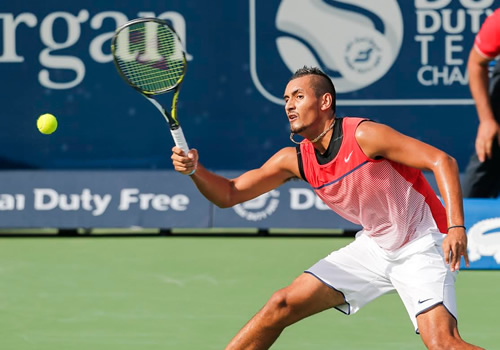 Nick Kyrgios: He has that youthful rolling swagger, a style of play that appears casual in the extreme, and a personality and look that are carving a unique furrow in tennis.

He may divide opinion—not least for some incautious comments along the way—but of one thing there is no doubt: He is a huge talent.

The 6ft4in Aussie proved that almost from the first: a junior Grand Slam champion, and a first main-tour match-win the very next year, age 18, with a blistering three-tie-break victory over Radek Stepanek at the 2013 French Open.

By 2014, he was making headlines. He won his first match at the Australian Open, but it was on the summer’s grass that the world stood up and took notice. He won eight straight matches to claim the Nottingham title, earning a wild card to Wimbledon, where he reached the quarters by beating Richard Gasquet and then No1 Rafael Nadal. By year’s end, still only 19, he was ranked No52.

Another Grand Slam quarter-final heralded 2015, this time at his home tournament. Then it was a first ATP final in Estoril, followed by victory over Roger Federer in a final set tie-break, 7-6(12), at the Madrid Masters.

Already Kyrgios was inside the top 30, but ended 2015 with a blot in his copybook: warnings for abuse during matches. Perhaps more concerning, he missed the end of the year with injury in what was becoming a familiar pattern.

For Kyrgios may have taken still greater strides except for all-too-frequent injuries. After the Australian Open in 2014, it was his elbow, and after last year’s Major ‘down under’ he was sidelined with a back injury. Last October’s injury was to his arm, and already this year he has missed court-time first with an ankle problem and then, in Rotterdam, with his elbow.

But when fit, the now 20-year-old seems able to conjure up the spectacular at the drop of a hat. And last week, he surged to his first ATP title, beating Gasquet, Tomas Berdych, and Marin Cilic in the process—and without dropping his serve all tournament.

Now, playing in Dubai for the first time, he has reached his first ATP500 semi-final via some really strong opposition. He came back from a set down to beat Rotterdam’s champion, Martin Klizan, in the first round, and then took out Mikhail Kukushkin for the loss of just five games.

That set up what promised to be a battle royal against the world No7 who Kyrgios beat last week, Berdych, who has himself been in outstanding form. In his first two matches, the big Czech who has twice been a finalist in Dubai and reached the semi-finals or better in four of his last five appearances, had lost just nine games. And despite last week’s loss to the man a decade his junior, Berdych had won their only other match in four sets at this year’s Australian Open.

The start of the match, though, was bizarre: Berdych was broken straight away, but Kyrgios appeared to be struggling physically, grimacing his way to a 2-0 lead. He called for the trainer at the next change of ends but did not take treatment for another two games, by which time the free-hitting Aussie had disrupted the familiar Berdych rhythm by rushing in to attack the serve.

Berdych fended off a break point in fifth game, before a long hold-up as Kyrgios had his back manipulated. The treatment seemed to work.

Kyrgios had Berdcyh on the ropes again with a stunning whip of a forehand winner, but the Czech used his newly-honed net skills to save two break points.

Not to be outdone, Kyrgios began to unpack his own net game, first with a serve-and-volley put away, then with the deftest of touch drop volleys. For he is a player of easy power but great deftness, and at times he manages to make his tennis look like a practice session. In 45 minutes, he had the set, 6-4, with 16 winners to just five from Berdych.

Berdych’s first serve was key, for Kyrgios was onto the second serve with all kinds of winning replies. When the Czech got his first delivery into play, everything was fine, but the pressure was taking a toll: a 48 percent success rate in the set. Meanwhile, Kyrgios was serving better with each game: He dropped only four points on serve in the entire set.

Having served to love, then, Kyrgios produced a couple of jaw-dropping plays in the ninth game, and broke with a backhand drop winner. It was the work of a minute to serve out the win with his 10th ace, 6-4.

Kyrgios was complimentary about his opponent: “I was really surprised with the performance I gave out there today to beat a quality player and in tough conditions. It’s probably my favourite win over the last couple of weeks. You know, he’s so diligent with everything he does. He’s so professional. So for me to come out there and put in a great performance like that, I just took my chances when they came.”

In under an hour and a half, the 20-year-old had certainly proven his talent to the Dubai crowd, but their support may be tested in the semi-finals. For now Kyrgios meets the man who was on the receiving end of his abuse last summer, Stan Wawrinka.

The Swiss No2 seed is a favourite here, and has already won more matches than in his two previous visits combined—the last of them eight years ago. He reached the semis in accelerating form over Philipp Kohlschreiber, 7-5, 6-1. This match, though, will be as big a test of concentration and focus as racket skill.

Meanwhile, in the top half of the draw, Marcos Baghdatis beat the in-form Roberto Bautista Agut 7-5, 6-0, despite clinging on by his fingernails in the eighth game of the first set. The Cypriot made four double faults but survived break points, before both men then exchanged breaks.

Bautista Agut, owner of two titles this season already, gave away another break with a double fault, and Baghdatis survived an eight-minute service game for the set, 7-5, after 67 minutes. But the Spaniard’s game went to pieces in the second set as Baghdatis upped his level, and he was bagelled in under half an hour.

The Cypriot next plays either Novak Djokovic or Feliciano Lopez.