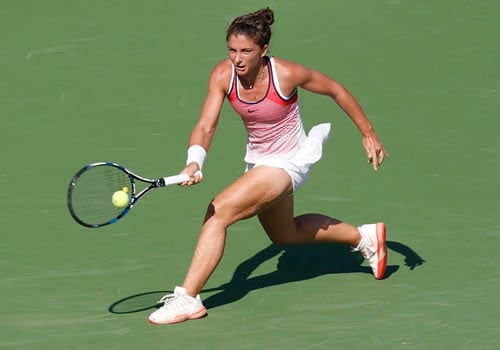 Sara Errani held off a strong challenge from the fast-improving 21-year-old, Elina Svitolina, after turning around deficits in both sets, 6-4, 6-4, to reach her second final at the Dubai Duty Free Tennis Championships.

Aside from a quarter-final run in Sydney, Errani—a former top-five player, currently No22—suffered a difficult opening to 2016, scoring just two match-wins from three tournaments and a Fed Cup tie against France. Her last title came exactly a year ago in Rio de Janeiro, and Dubai marks her first final run since Bucharest last summer.

In a match of long baseline rallies and multiple breaks of serve, each player struggled to keep the advantage. Svitolina saved a break point in the opening game and was then broken for 2-1 when she netted a forehand. But Errani’s lead was short-lived as she double-faulted in the next game to drop her own serve. Svitolina then faced break point for the third straight game but held for 3-2, before Errani broke again at 3-3 on her fifth break point.

Errani was again unable to hold on to her lead, and Svitolina levelled at 4-4, but young Ukrainian in turn dropped her serve for a third time to give Errani a 5-4 lead. This time the petite Italian managed to retain her lead and held serve to claim the opening set.

Svitolina continued to struggle in her service games in the second set, fighting off two break points to hold for 1-0, breaking for 3-1, but then allowing Errani to immediately break twice to lead 4-3. Errani then had to recover from 0-30 as she closed out the match.

Errani admitted it had been a tough day as the hot conditions took their toll: “It’s tough today: It’s hot and Elina hardly missed a ball at first, so I just tried to stay focused every point.”

Within a couple of hours, Errani was back on court alongside Carla Suárez Navarro in doubles, but Chuang Chia-Jung and Darija Jurak edged a tight contest, 5-7, 7-6(5), 10-7 to reach the final.

The No47-ranked Czech, who like Errani has been a pro for more than a dozen years, is a diminutive 1m64 tall and 60kg in weight, and has a losing record against Errani, but their last meeting was a marathon affair. On the grass of Eastbourne, it took over three hours to determine the winner, which happened to be Errani, 6-2, 6-7 (1), 7-6 (7).

The Dubai tournament may be missing the top-ranked players in the world, whether through injury or through defeat in the early rounds, but this Premier final promises to be a cracker.