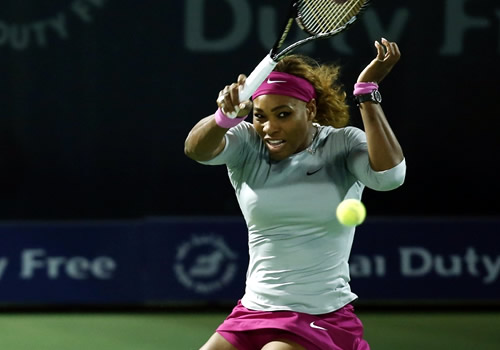 Serena Williams is out of the Dubai tournament Photo: Dubai Duty Free Championships

World No1 and intended top seed Serena Williams has been forced to withdraw from the prestigious WTA Premier tournament that gets under way in Dubai this weekend.

The 19-time Grand Slam champion has failed to recover fully from the respiratory virus that she picked up on her way to the Australian Open title a fortnight ago.

Williams managed to play one singles rubber for the USA in the Fed Cup in Buenos Aires, Argentina last weekend, beating Maria Irigoyen 7-5, 6-0, but her place was taken in the second match by Coco Vandeweghe as Williams battled the same illness.

Venus Williams, who is defending her title at the Dubai Duty Free tournament, said her sister needed to “regroup and feel better”, adding: “It’s just very challenging to hit three and four continents in a row.”

Serena has three times been a semi-finalist in her four visits to Dubai but has yet to win the title.

There was more disappointment when world No7 Eugenie Bouchard also withdrew with an arm injury, having been granted one of the tournament’s wild cards just days ago.

The 20-year-old Bouchard, a quarter-finalist at the Australian Open, was the top seed at the Fortis Diamond Games Premier event an Antwerp this week, but made a shock exit in the first round to world No 42 Mona Barthel.

With Maria Sharapova not scheduled to play in Dubai, world No3 Simona Halep tops the seedings in what remains a high-quality, tough field comprising every other woman in the top 12.

At the top of the draw, Halep could meet Australian Open semi-finalist Ekaterina Makarova or Andrea Petkovic, who has just returned to the top 10 for the first time in almost three years, in the quarter-finals.

Meanwhile, two former Dubai champions, No2 seed Petra Kvitova and No5 seed Agnieszka Radwanska, are lined up for a quarter-final clash at the bottom of the draw.

But one of the most intriguing early matches is a possible second-round contest between he 34-year-old three-time champion Venus Williams and Swiss rising star, the 17-year-old Belinda Bencic. They last met at the French Open, with Bencic ranked No80, and she has since risen to 37 after a quarter-final run at the US Open and her first final at the end of 2014.

Also in the draw is Heather Watson, who could meet Makarova in the second round.

Julia Goerges, with a Lucky Loser card, sets up a tricky first-round clash with No10 seed Flavia Pennetta, while resurgent Mirjana Lucic-Baroni could prove to be a tough opening test for the unseeded Sam Stosur.