Eastbourne 2013: Laura Robson admits she is pleased with her serve after setting up a second-round tie with Caroline Wozniacki 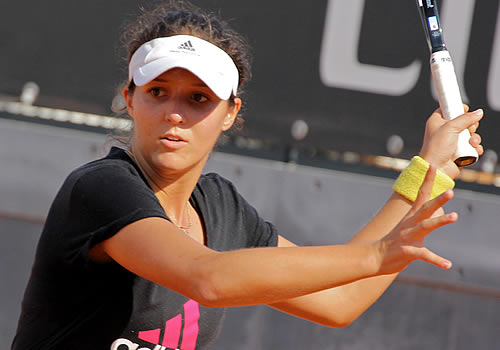 Laura Robson will face Caroline Wozniacki in the second round Photo: Marianne Bevis

Laura Robson admitted she was pleased with her serve after setting up a second-round encounter with her French Open conquerer Caroline Wozniacki at Eastbourne.

The 19-year-old British No1 played with confidence, under the guidance of recently-appointed coach Miles Maclagan, as she beat Ukrainian qualifier Yulia Beygelzimer 6-3 6-2.

And Robson, who is currently world No37, believes there is still plenty of room for improvement despite her emphatic straight sets win.

“I think there’s still so many things I can improve on but I thought I served really well today – that’s a big bonus for me and hopefully I’ll get better with every match,” Robson told BBC Sport.

When asked what area in particular she wanted to improve on, Robson replied: “I’d just like to win more often, that’d be nice!”

Next up for Robson is fifth seed, Wozniacki, who beat the Brit in straight sets in the first round of the French Open over a fortnight ago.

The former world number one set up the meeting with Robson after defending champion Tamira Paszek retired in the second set, with Wozniacki 6-2 2-2 ahead.

And the Dane is anticipating a more difficult encounter with Robson on the grass.

“I’m sure she likes the grass better than the clay. She can serve very well, and she’s going for it from the first ball. Definitely it will be a different match-up.”