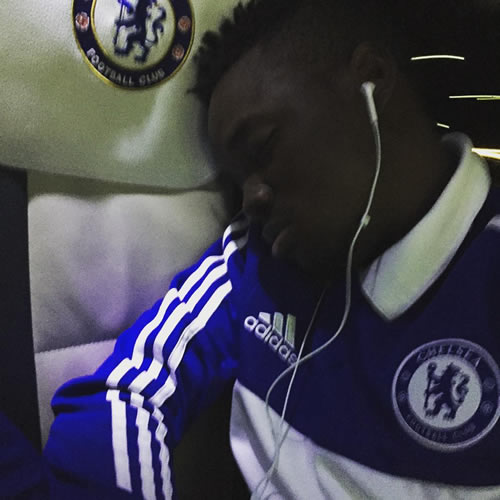 Bertrand Traore netted his first goal for Chelsea after coming on as a substitute during the Blues’ 5-1 FA Cup win over MK Dons on Sunday – and then promptly fell asleep on the coach home.

Traore came on in the 57th minute and slotted home five minutes later after being found by Hazard in the box.

His appearance seemed to all be a bit much for him after the game and he caught up on some shut-eye as the Blues made their way back down to London.

And Hazard was on hand to snap a picture of his snoozing team-mate after Chelsea’s impressive FA Cup win.

Hazard posted the photo above on his personal Instagram account and wrote: “Here is what happens when you score your 1st goal for @chelseafc @bertrandtraore10 #mylittlebrotheristired”

Hazard scored his first goal of the season from the penalty spot to add to Oscar’s hat-trick as the west London side sealed a comfortable win at Stadium MK.