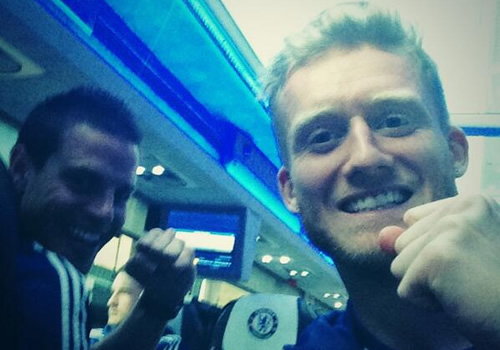 The Blues took the lead on the stroke of half-time at Anfield when Steven Gerrard slipped and allowed Demba Ba to slot past Simon Mignolet.

And substitute Willian scored in injury time after Fernando Torres unselfishly squared the ball to the Brazilian.

Sunday’s Anfield clash inevitably prompted a flurry of activity on Twitter – and here are our favourite updates, in chronological order.

Ex-Liverpool man Michael Owen (@themichaelowen) is already sensing how the game is panning out: “Chelsea killing the pace of the game already. They want to quieten the atmosphere. A late goal is their game plan.”

Former Stoke defender Danny Higginbotham (@Higginbotham05) gives his take on proceedings: “Chelsea’s game plan today was never going to be about keeping the ball. It was to frustrate Liverpool am then look to win it on last twenty”

Comedian Jack Whitehall (@jackwhitehall) feels that the Special One is not looking his best: “Mourinho looks hungover.”

Former Netherlands international Mario Melchiot (@MarioMelchiot) chimes in as Chelsea take the lead: “#ba does it again!!! #liverpoolvschelsea 1-0 Who would expect Gerrard to slip right there. Ba was as cool as ice. #mmlove #CFC”

Ravel Morrison (@morrisonravel) wants the Reds to respond: “come on Liverpool you deserve it this year don’t let this slip”

Ex-Liverpool goalkeeper Pepe Reina (@PReina25) feels confident that the home side will turn it around: “Pretty sure they’ll come back in the 2nd half…come on boys!! To attack The Kop is an advantage..Let’s make it happen!!”

After the final whistle, injured Chelsea playmaker Eden Hazard (@hazardeden10) thanks his team-mates: “Thank you @chelseafc”

Ex-Bolton midfielder Fabrice Muamba (@fmuamba) delivers his post-match verdict: “All football clubs should know by now next time they having a house party DO NOT INVITE JOSE and His troops because they will destroy it. Love him or hate him. Jose is the best football manager of his generation.”

Reina (@PReina25) still thinks that the Reds can win the title: “Still VERY much alive!proud of that crowd that just after Chelsea’s 2nd was singing YNWA as usual..Btw credit to Chelsea..very tough to beat”

Joey Barton (@Joey7Barton) is not surprised: “Well that’s what I expected. Mourinho tactically superb even with some big hitters out.”

Former Liverpool man Neil Mellor (@NeilMellor33) chimes in after the final whistle: “You have to win those games in hand to get the points!! Its in city’s hands but trips to Everton and first palace is tough to get all 6pts!!”

Chelsea defender Cesar Azpilicueta (@CesarAzpi) is a happy man: “Superb victory! This team never gives up and with your support we’re even stronger! We need you on Wednesday! #KTBFFH”