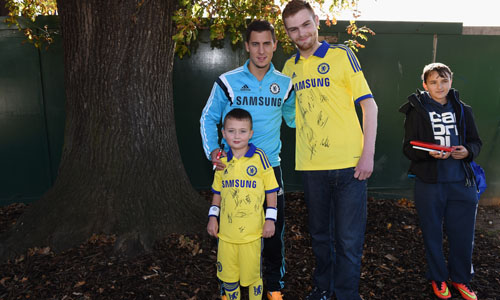 Sunday proved a day to remember for a host of young Blues’ fans as they visited our Cobham Training Ground to meet their Chelsea heroes.

Among the guests were 17-year-old Joe Peterson, who has multiple endocrine neoplasia (a rare form of cancer) and mum Gill, who made the trip to Cobham all the way from South Shields near Newcastle.

Joe, who receives regular treatment at Great Ormond Street Hospital, said: “I am a big Chelsea fan from a young age and woke up really early to get here as I was so excited.

“My favourite players are Eden Hazard and John Terry and to meet them is unbelievable.”

“This is a chance in a million,” added Gill. ‘Living where we do we don’t get much chance to see Chelsea and the only time we are down here is when Joe is in hospital and that is usually intense treatment.

“The chance for Joe to do this is brilliant as it will probably be the only chance he gets.”

Joining Joe, was six-year-old Liam Domsalla, who has enteric neuropathy and eosinophilic colitis, and mum Hannah admitted the day trip to Cobham was a special moment in her young son’s life.

“Liam is an avid Chelsea fan and it was his dream to come and meet the players. He is waiting for a stoma bag and with the big operation he has coming up it is just amazing,” Hannah said.

“Hazard and Didier Drogba are his favourites and this has just made his day. He has been counting down the days to coming here and it is the only thing which has got him through some tough days recently.”

Seven-year-old Jake Curtis, who has autism, was also in attendance with the youngster personally invited by John Terry.

Terry, who made his 500th appearance as Chelsea captain in our 2-1 win at Crystal Palace on Saturday, spoke at length to the youngster and his parents after training leaving dad Simon to reflect on a morning never to forget.

“It was absolutely fantastic for Jake to meet the players and in particular John,” said Simon.

“It is a fantastic thing for the club to do and is a once in a lifetime chance for the kids who come along.”