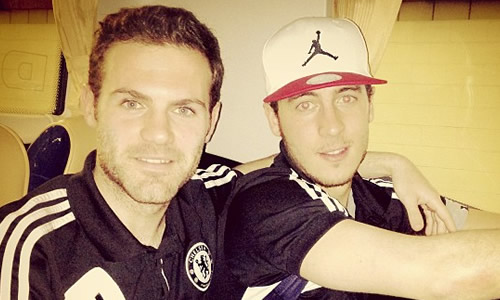 Chelsea took a big step towards securing their place in next season’s Champions League with victory at Manchester United after defender Phil Jones scored a late own goal at Old Trafford.

United fielded an understrength side and struggled to test the visitors, with Juan Mata’s late effort deflected past Anders Lindegaard before Rafael Da Silva earned an 89th-minute red card for kicking out at David Luiz.

Here is the best of the reaction from the professionals, both past and present, after Chelsea’s vital win against the champions.

West Brom midfielder Steven Reid (‏@stevenreid12) doesn’t agree with Howard Webb’s decision: “Tell me he’s not been given a straight red there??? Shocking reaction from #Luiz #disgusting… Ok could be a red.. But that reaction from #Luiz is a disgrace!”

Ex-Wimbledon striker Jason Euell (‏@jasoneuell) is critical of Luiz’s reaction to Rafael’s foul: “What have I just seen from Luiz.. Yes it’s a foul but don’t laugh and then try to milk the injury..”

Former Liverpool midfielder Dietmar Hamann ‏(@DietmarHamann) reckons the Blues should appreciate their current boss: “Have Chelsea fans realised that they got one of the best managers in the business?”

Euell (‏@jasoneuell) asks how Arsenal and Spurs supporters are now feeling: “Gooners. Do you want a CFC win on Wednesday or a draw for all three teams fighting for two CL spots?”

Arsenal fan Piers Morgan ‏(@piersmorgan) reckons the Gunners could finish their season without a ‘trophy’: “Damn you, Chelsea. This was our last chance of winning a ‘trophy’. #Arsenal #4thPlaceHopesVanishingFast”

Another former cricketer and Blues man Alec Stewart ‏(@StewieCricket37m) hails Mata: “Get in there! He does it when it Mata’s!! #cfc”

Chelsea playmaker Eden hazard (@hazardeden10) – who missed the game due to a calf strain – is delighted with three points: “Very important win now our focus is on Wednesday. #cfc”

And finally on Instagram, Blues star Juan Mata (juanmatagarcia) is looking forward to a well-earned rest ahead of Wednesday’s showdown with Tottenham at Stamford Bridge: “What an important victory! Time to rest and get ready for Wednesday! #chelseafc #ktbffh #wecandoit #vamosequipo”

Villas-Boas: I was just another manager that ‘passed by’ at Chelsea