Emotional Andy Murray answers the call of home – and much more 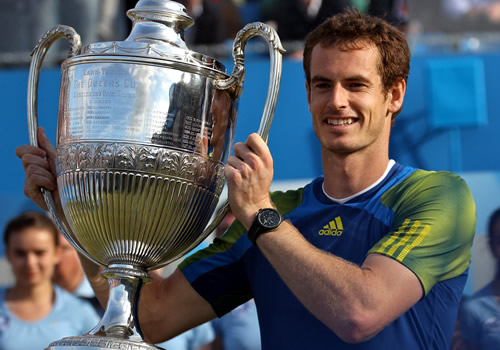 It may not have been the most auspicious start for Andy Murray’s homecoming. The plane he took back to the UK from training in Paris was twice hit by lightning—though he assured his Twitter followers that he was fine!

Then one of his bags went missing in transit so, as he later explained to a hall full of awe-struck school pupils, he almost turned up for his Q and A session at their college in tracksuit and trainers.

Not that his young fans would have been too bothered, one suspects, but Murray had other more formal business to think about during his trip home—events where a suit was most definitely the order of the day.

Fortunately, his best bib and tucker arrived in time, and it was a tall, elegant Murray—in sharp navy suit and crisp white shirt—who arrived for two rather special awards.

The first found him at his former high school in Dunblane, where the 26-year-old Murray became just the third freeman of Stirling, the city just three miles down the road.

Stirling’s Provost Mike Robbins introduced Murray as “an inspirational figure at the top of his game”, and head teacher Frank Lennon continued:

“It is appropriate that this ceremony is taking place in the Murray Hall, so named before any Grand Slams or Olympic gold medals were won.

“The school recognises the aspiration, dedication, effort and family support that has characterised Andy Murray’s success. These are ideals to genuinely inspire our young people.”

Based on previous experience, it was perhaps no surprise that, when called upon to say a few words, Murray’s emotions got the better of him.

The many Britons who watched a BBC documentary on Murray before Wimbledon last year, with French Open champion Sue Barker as the sensitive interviewer, will recall the impact on a nation of Murray’s tears when asked about the tragedy that befell his school as he and his brother were about to begin classes on one unforgettable morning.

For those unfamiliar with his quiet and self-effacing demeanour, it was a revelation, just as his desperate attempt to thank the Centre Court crowd after losing his first Wimbledon final in 2012 had been. 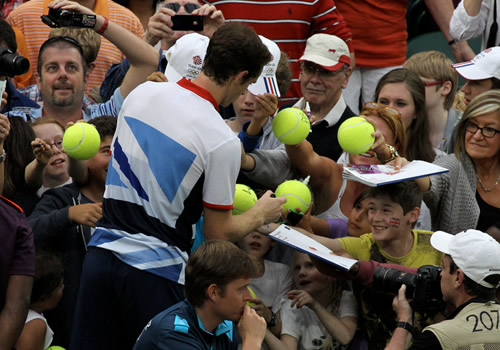 Now his heart was back on his sleeve again as, biting back the tears, he managed: “It feels good to be home. Everyone knows that I’m extremely proud of where I come from, so this is a huge honour.” And then apologised.

He handled the other award—an honorary doctorate from the University of Stirling in recognition of his services to tennis—with more composure. But while universities the world over award honorary degrees to the great and the good, to celebrities and academics with whom they often have little connection, this really did mean something.

For it was at Stirling University that the young Murray and his brother Jamie trained as school kids, and where their mother, Judy, spent many years as coach to Scotland’s budding young tennis players.

Murray was clearly moved by the honour, and the memories it revived:

“I’m honoured and very grateful to receive this… I trained on the courts at the Scottish national tennis centre at the University when I was growing up and I remember playing against the students, which was great fun. I know there are many talented junior players practising there every day and I’d encourage them to keep working hard toward their goals.”

But these awards were just one part of a packed day for Murray. He also visited the luxury hotel, Cromlix House, in which he decided to invest to generate both reputation and employment for the region.

However the highlight of the day saw him back in school, this time the Wallace High School in Stirling, for a long, and often challenging Q and A session, streamed live on the BBC. Challenging, because he had to react ‘blind’ to questions from pupils both in the audience and via Skype and email.

Accompanied again by Sue Barker, he quickly admitted: “I’m a bit worried about the ‘unlimited’ questions!” In truth, he neither looked nor sounded worried—and he was quick to point out that he does around 80 press conferences year where he hears the same questions time and again: “This is far more interesting.”

Of course, with no holds barred, the students got to ask some up-front questions.

Where did he meet his girlfriend?

That was easy: “In New York more than eight years ago, because her father was a tennis coach”, but then came the entertaining supplement: “In my match the next day, I vomited on the court twice, and once on my opponent’s bag—but she still seemed interested in me.”

You try and listen to the part of the brain that’s being rational. It’s not easy though

There was room for more self-deprecating humour when asked how much care he takes over his appearance: “Have you seen my hair lately?”

He admitted, though, to wearing blue not just because he likes it but because “I’ve been told I look nice in blue.”

A recorded question from his mother drew the best deadpan response of the day. “What do you call a donkey with three legs” was immediately countered by: “I’ve been hearing that joke for about 15 years! The answer is wonky, but don’t laugh—it’s not funny! The thing is, she makes herself laugh but no-one else.”

But amid the light-hearted banter and a test of keepy-uppy with two of the pupils, there were some serious answers to serious questions.

He admitted that winning the Olympics was probably his greatest achievement: “Winning the gold medal was probably the proudest moment. When you play for your country and your team, it’s great, and I’ll never play in another Olympic games at home.”

Remarkably, though, he still hasn’t watched any but the last moment of his Wimbledon triumph: “I don’t like watching myself.”

And what advice would he give to his 13-year-old self? The answer proved, not for the first time, that Murray is his own fiercest critic: “Not to be too hard on yourself, give yourself a break. You can stress yourself out. When I was young, I used to get really worked up on the court.”

And now: “I tell myself quietly to shut up… There are like two voices in your head, one telling you you’re rubbish and messing up the match, and the other trying to calm you down. So you try and listen to the part of the brain that’s being rational. It’s not easy though.”

Of course, Murray was burdened with the expectations of a champion-starved nation almost from the moment he turned professional.

“Being seen as a role model for young kids, it’s quite a responsibility, something I struggled with when I was 18, 19 years old. I went from playing competitions with 10 people watching to playing my first Wimbledon on Centre Court, ranked 350 in the world, and told that 12 million were watching on TV and 15,000 more live on court. It was a huge change when I was still very young.”

There was plenty more to savour in a jam-packed hour—nuggets of information that added more light and shade to this complex and likeable man.

His inspiration growing up? Andre Agassi “because he was different—had a bit of an attitude: a lot of the time now, people are looking for the perfect person and not encouraged to be different.”

His best subject at school? Maths.

His favourite shot? The drop shot: “Always has been.”

And would he consider coaching when he stops playing? “Yeah. Yes, I would definitely consider it after taking a few years out. And maybe start a family…”

That one hung in the air, for he has deftly batted away questions on Twitter about his relationship with girlfriend Sears. And in any case, Murray’s long day was almost done. He would, he said, be leaving for Spain the next day to prepare for his next big tournament, the Madrid Masters.

Murray will not return to home soil until tennis turns to grass and he begins his double title defence at Queen’s and Wimbledon.

But win or lose, it is sure to be another emotional reunion.