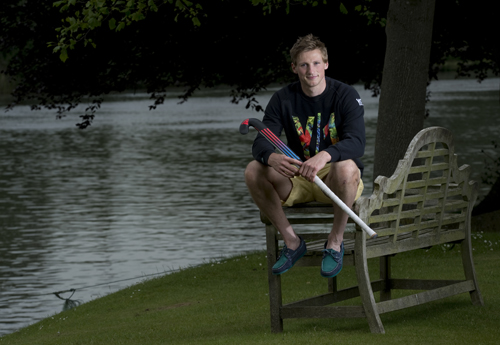 English hockey player Tom Carson was born to blend his sporting passion with a savvy entrepreneurial edge from the day he started selling discarded hockey sticks left on his school astro.

Fast forward several years and Carson, at just 24, is hoping to make his Olympic debut at the Rio 2016 Games while he delicately oversees the growth of his own clothing brand.

Carson was part of Bobby Crutchley’s England team which kicked off the Champions Trophy in Bhubaneswar, India – a stepping stone towards the 2016 Olympics – on December 6 with a 3-1 victory over reigning world champions Australia.

Just 24 hours later and 5,000 miles away, Carson’s clothing brand YoungOnes began a promotional tour of the UK, starting in Durham and moving on to Newcastle, Leeds, Brixton and Exeter, the place where it sprung into life.

They flew in a DJ and saxophonist from France, played games of beer-pong and handed out freebies. Then at the Brixton event they had a couple of surprise guests in The Apprentice’s Solly Akhtar and multi-award-winning musician Ben Howard.

“It is frustrating,” Tom says, sat at the bar of Reading’s 5-star Forbury Hotel. “I knew that if I was selected for the Champions Trophy, I wouldn’t be able to do it, but it was the perfect time for the tour because it was the last week of term for students.

“It is just one of those things I have to do. I wouldn’t do it another way. Hockey is my real passion.”

That passion is clear from his dedication to the sport and can be seen as he considers the proudest moments in his life.

Despite achieving the success he has in business at such a young age, that doesn’t come close to the pride he has in making his England debut and finishing third at the World League in 2012.

“My debut was anti-climatic as we lost 5-0 to Belgium, but of course, it was a very special moment for me because I had been picked to play,” Tom says, cheeks still flushed from an early morning gym session.

“Finishing third in the World League was amazing. I was really proud of that moment because I played really well and we had got a medal. It was not a massive tournament but I felt like I was a key part of it and had become a useful player to England.”

At club level, Tom plays for Andy Watts at Reading Hockey Club having moved to the royal county of Berkshire in 2012 after being offered a place on Fugitsu’s Graduate Scheme.

At 29, Andy is a young Head Coach, and for this reason he set up a Leadership Group at Reading, a team of players who help the channels of communication at the club.

He made Tom a part of the group due to his time with England: “International experience is more than years of experience, if you like. Tom has brought that experience to the group along with a positive energy and great work-ethic.”

Despite his age, Andy believes Tom is a great role model for the younger players at Reading.

“Hockey is first and foremost for him – it is his priority. If Tom has done two training sessions in a day he is still always fully committed at club training in the evening.

“The company has never interfered with hockey, he always plans that around Reading and England. He does, however, always turn up in YoungOnes-branded kit,” Andy chuckles.

The link between the two industries seems to be a narrative which begun early on in Tom’s life: “I remember going down to the school astro at the end of terms and finding someone had left a hockey stick behind. I would put it into lost property knowing that in six months time, if no one picked it up, I could have it and sell it to earn a few pounds.”

For Tom, the prospect of honing these entrepreneurial skills into creating this successful business was pivotal in allowing him to pursue a career in the sport he loves.

There are no multi-millionaires living lavish lifestyles in hockey – it simply doesn’t get the publicity. Therefore, a second form of income becomes a necessity, and Tom’s degree in Business Management helped him down this dual path. 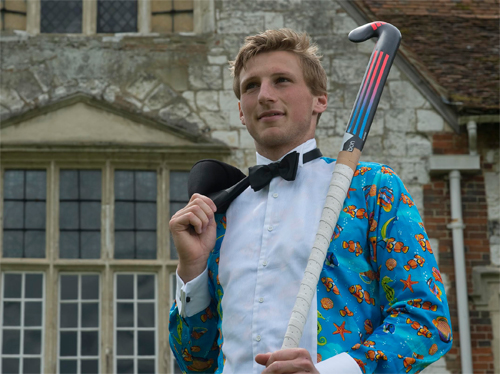 It was late at night in a little corner of the university library that Tom and Chris Rea struck the idea that lead them to the Dragon’s Den.

This was back in 2011: the year Amy Winehouse died, Bin Laden was killed and the country rejoiced the royal wedding, but, more importantly for Tom and Chris, it was the year the country went mad for onesies.

“We had a trial run with hockey kits and it was quite popular,” Tom reminisces. “But we also made some onesie samples as we recognised that there was no one in the market who produced them for clubs and societies.”

This soon proved to be an inspired decision and one which transpired to be the birth of YoungOnes.

After a whirlwind two years, which included receiving a bulk order from Harvard University, Tom found himself stood in front of Duncan Bannatyne being offered £75,000 for 40% of the business.

Ultimately, the two parties decided not to follow through with the deal.

“There is a lot of due diligence after the show, so although we went away with the intention to do the deal it never materialised.

“We weren’t desperate to give away so much of the company for something which could potentially become so much bigger, and he wasn’t overly desperate to invest.

A year on, Tom sips on his coffee a walking, talking advertisement, dressed from head to toe in YoungOnes apparel, evidently brimming with pride at his creation.

The company has become something precious to the young business partners and Tom speaks about their inexperience in the industry.

“It is just those things where you really need to invest heavily and take a big risk that could mean the end if it fails.

“They’re the sort of risks we maybe haven’t jumped into with both feet. We’ve sort of dipped our toes in and had good success, but dipping our toe in isn’t going to make that big step we want.”

On the day of this interview, one of those toes has been officially dipped in as Tom launches a brand of office wear for graduates called Just Winston. The idea being that it becomes an umbrella brand with YoungOnes.

Regardless of which path this innovative young entrepreneur decides to head down in business, one thing is for certain: his passion to succeed in hockey will set him on the Road to Rio 2016.