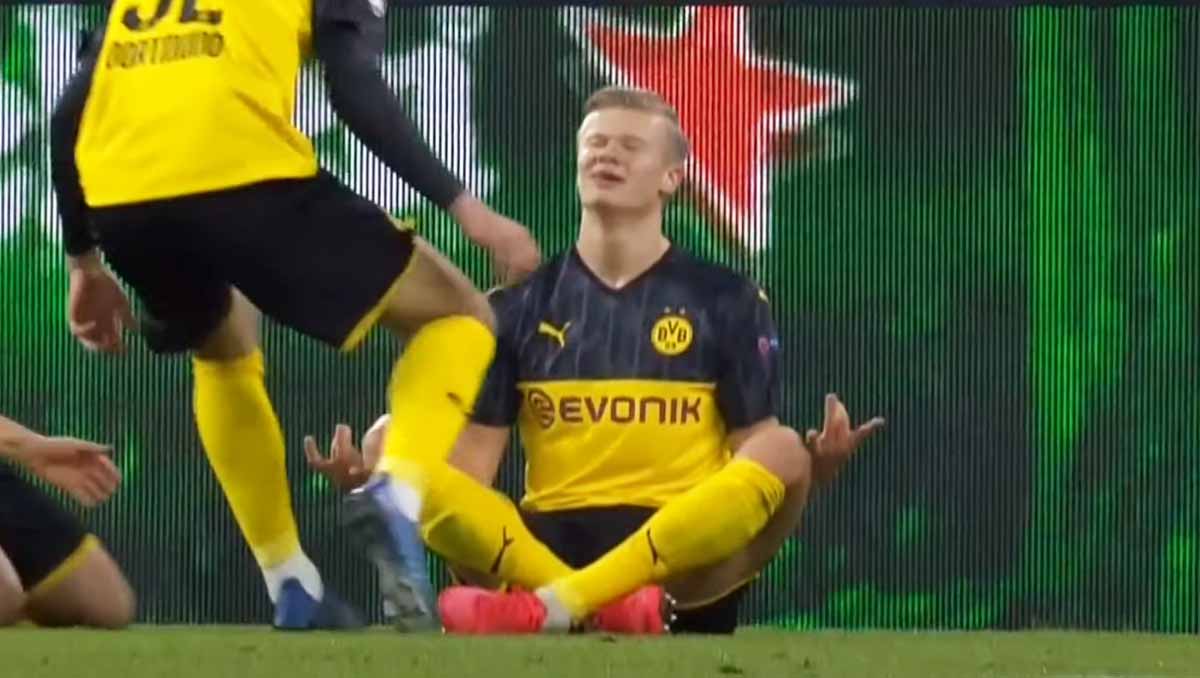 Erling Haaland is well-known for his trademark meditation goal celebration – a habit which has continued following his transfer to Manchester City in the summer of 2022.

The Norway international is considered one of world football’s most exciting young attacking talents and he has hit the ground running following his big-money move to The Etihad from Borussia Dortmund.

Although he doesn’t perform it every single time he scores, you’re probably already familiar with the trademark Haaland celebration – but what does it mean and where did the idea for it come from?

In this article, we’re going to take a look at exactly why Haaland performs this celebration. We’re going to see what he’s said about it in the past, and also recount a situation in which it caused controversy.

So, with the introductions out of the way, let’s start finding out more about the Erling Haaland goal celebration. 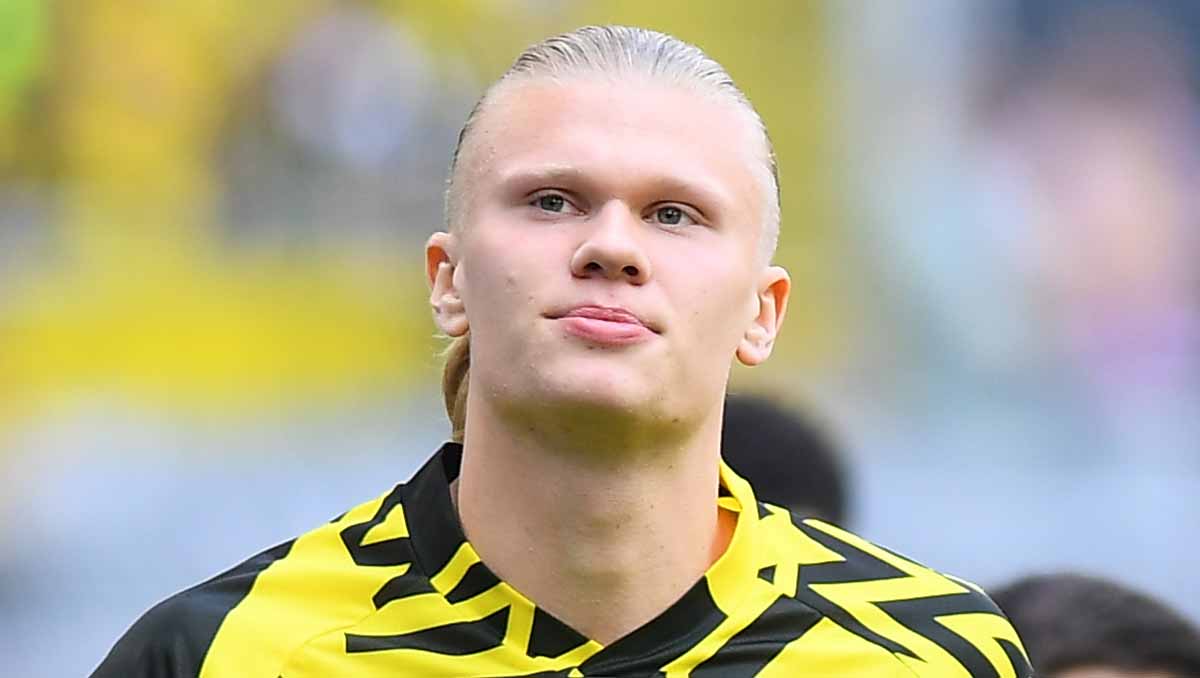 What Is The Erling Haaland Celebration?

Haaland has become well-known for performing his trademark ‘meditation’ goal celebration after finding the net over the last few years.

The celebration hit the headlines back in 2020 when it ended up being mocked by Paris Saint-Germain players following the French club’s win over Haaland and his Borussia Dortmund team-mates in the Champions League last 16 (more on that below).

Haaland’s celebration involves him sitting down in a crossed-leg position and imitating a meditation position similar to the Lotus pose in yoga. He usually gets into the pose while his team-mates rush to celebrate with him.

In case you didn’t know, the pose is traditionally considered to be a method of helping to calm the mind and prepare the practitioner for deep meditation.

Although he does not adopt the pose every single time he scores, Haaland has used this celebration at Red Bull Salzburg, Borussia Dortmund and Manchester City. 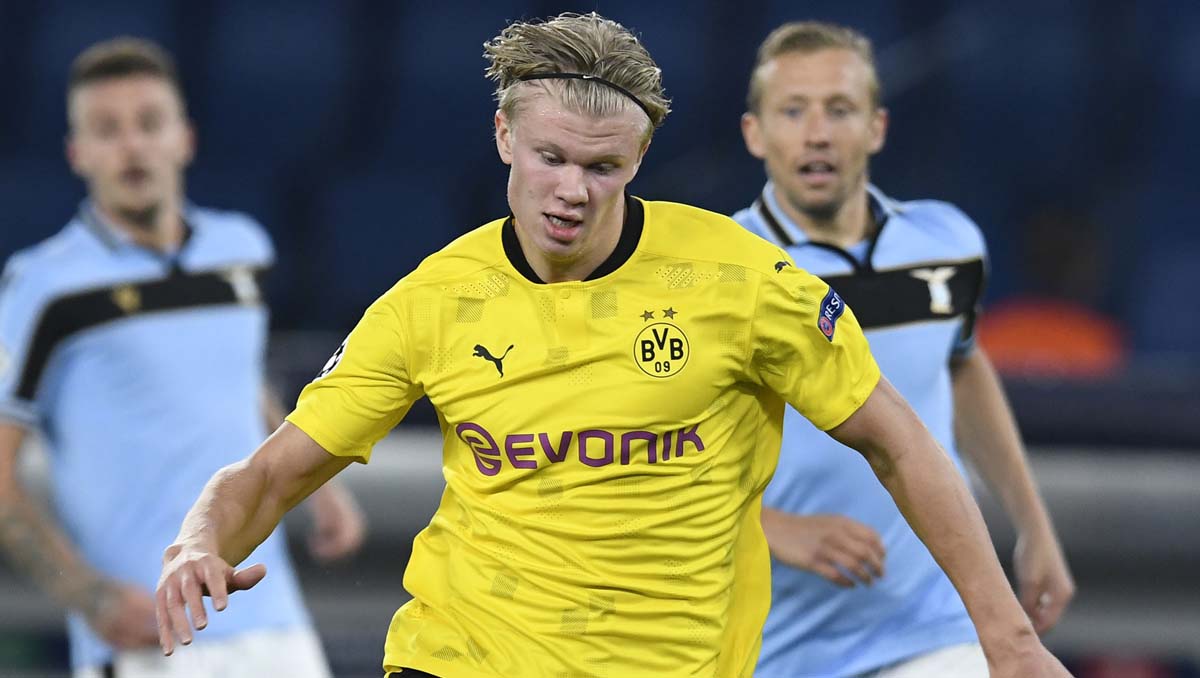 What’s The Meaning Behind The Celebration?

Haaland has spoken in the past about exactly why he performs the celebration. In short, it is a tribute to the practice of meditation, something which he says has helped him during his personal development journey.

Meditation is the practice of using techniques in order to achieve a mentally clear and emotionally calm state. There are various different meditation techniques – such as mindfulness, for example – but they all generally point generating a calm and relaxed state.

Haaland says he has felt considerable benefits from making meditation part of his pre-match routine and that’s why he has chosen to highlight it with his goal celebration.

Speaking in an interview with Esporte Interativo back in 2020, Haaland revealed that the celebration is a nod to his spiritual practice.

“I really enjoy meditation,” Haaland replied when asked about the meaning of the celebration. “It makes feel calm and gives me tranquillity. This is why I sometimes celebrate like that when I score.” 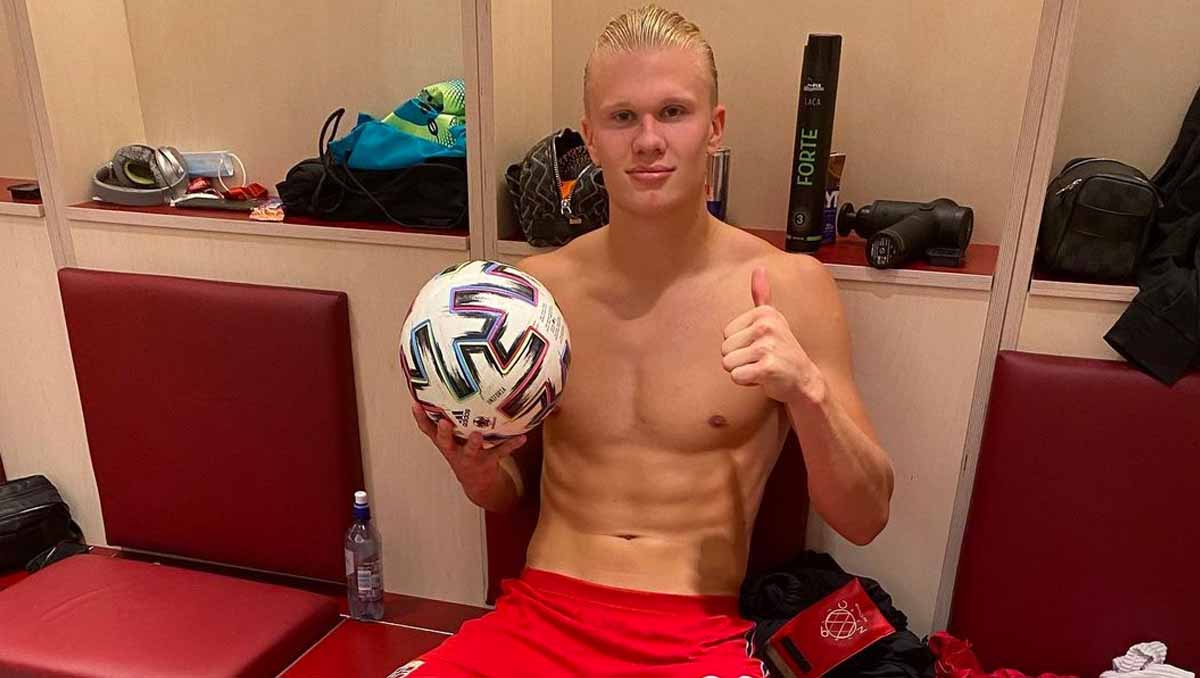 In a separate interview with Borussia Dortmund TV in 2020, Haaland revealed that he has made meditation one of his pre-match rituals.

“I train a lot, and I meditate a lot,” Haaland said. “Before a game, I always listen to a song called ‘Keep Dreaming’ – and I also meditate.”

Why Did The PSG Team Mock The Haaland Celebration In 2020?

The Haaland celebration made the headlines in the Champions League back in 2020 during PSG’s last-16 clash against Borussia Dortmund.

In the first leg in Germany, Haaland scored both goals in a 2-1 victory for the Bundesliga side – and he performed his trademark celebration after netting the opener (shown in the picture at the top of this article).

However, in the return leg at Parc des Princes on 11 March 2020, PSG claimed a 2-0 victory to progress to the quarter-finals with a 3-2 aggregate win.

During the game, Neymar raised some eyebrows when he mocked Haaland’s celebration after having scored the opener in the 28th minute. He then went a step further by posting an image of himself imitating the Haaland celebration on his personal Instagram account after the game, writing the caption: “PARIS our city, not yours 👌🏽.”

After the game, some of the PSG squad also sat down on the pitch in a group to mockingly perform the Haaland celebration following their victory (shown below). 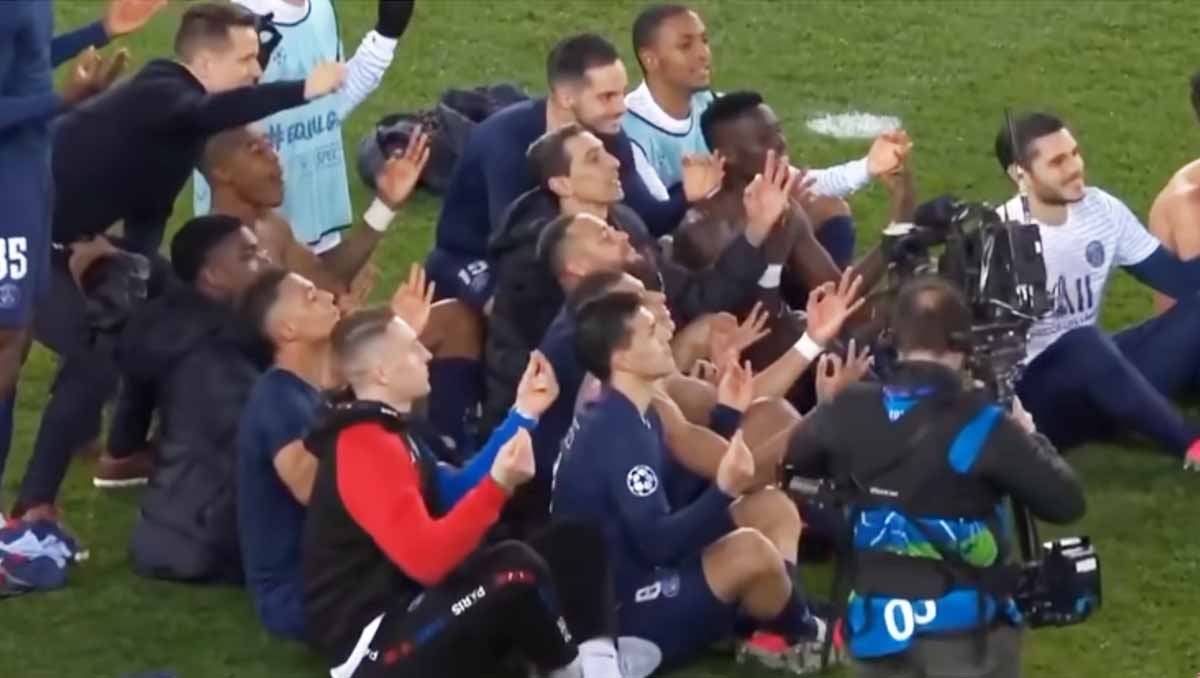 Some PSG players mocked Haaland’s celebration after their 2-0 victory over Dortmund in the Champions League last-16 in 2020 (Photo: YouTube / Screengrab)

“They are great players but now I will say they lost their humility,” Kimpembe told RMC Sport, as quoted by Metro. “Because after their victory at home [in the first leg] they put out a lot of tweets, a lot of Instagrams, a lot of words, a lot of this and that.”

Later in 2020, Haaland was asked how he felt about what happened after the game against PSG – but the Norway international insisted that he was not particularly bothered by how his opponents behaved.

When asked if the PSG players’ antics left him upset, Haaland told ESPN in April 2020: “No, not really. I think they helped me a lot to get meditation out in the world and to show the whole world that meditation is an important thing so I’m thankful that they helped me with that.” 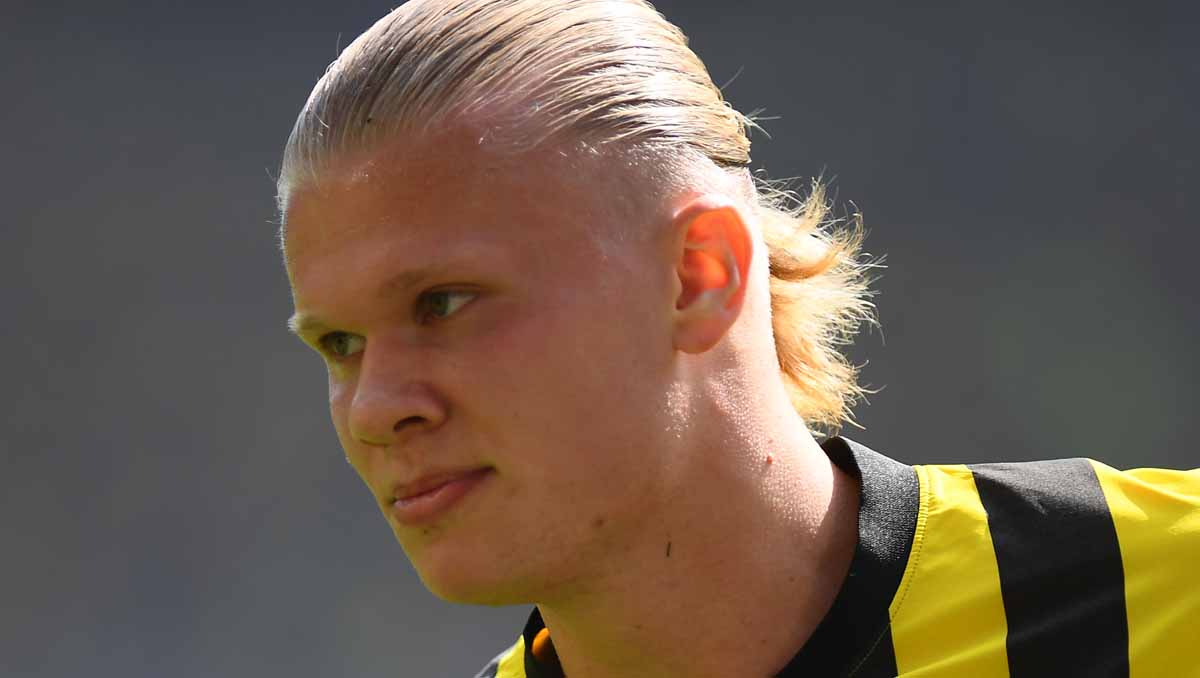 What’s Next For Erling Haaland?

Haaland left Borussia Dortmund to sign for Manchester City in the summer of 2022, after having scored 86 goals in 89 games for the German side in all competitions.

Following months of speculation, the deal for him to move to City was confirmed on 13 June 2022, with transfer fee widely reported to be in the region of £85.5m including agents fees and other add-ons.

The Norway international made a blistering start to life in England, scoring his first two Premier League goals for City in a 2-0 victory over West Ham United on 7 August 2022.

He then opened his Champions League account for the Citizens on 6 September 2022, netting twice in a 4-0 group-stage victory away to Sevilla.

Haaland’s start at Manchester City was nothing short of remarkable, with the Norwegian having scored 12 goals and made one assist in his first seven competitive games for the English side.

Whether he continues to perform his trademark celebration or not, it’s seems pretty clear that Haaland is set to establish himself as one of the top attacking talents in football history in the coming years.

Gabriel Martinelli vs Bukayo Saka Stats – What Do The Numbers Say?

Lionel Messi vs Cristiano Ronaldo Stats – What Do The Numbers Say?