The Russian qualifies for Nitto ATP Finals; Schwartzman in line for last spot 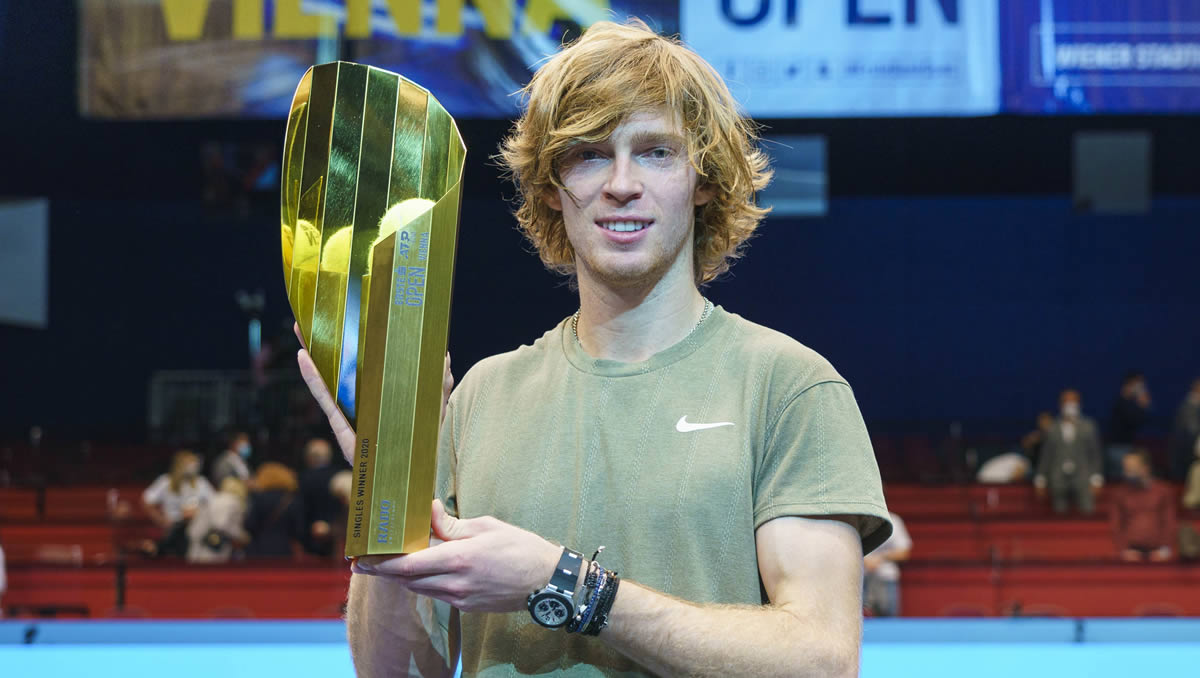 What a year it has been for the intense young Russian Andrey Rublev?

What an October it has been for the charismatic Italian Lorenzo Sonego?

Rublev, who turned 23 just a fortnight ago, started with a bang and back-to-back titles in Doha and Adelaide. He made the fourth round at the Australian Open for the first time, and bounced back from the coronavirus lockdown to reach the quarters at both the US and French Opens.

That heralded the start of a sizzling autumn, as he picked up two 500 titles, on Hamburg’s clay and St Petersburg’s hard courts, and he was now on the verge of a third 500 in a super-high-quality Vienna 500.

The statistics have spoken for themselves. A 38-7 match record, four titles, and needing just one more win to make it a tour-leading five titles and to qualify for the Nitto ATP Finals in London.

The story of Sonego was eye-catching, too. Like Rublev, he entered this stacked Vienna draw at a career high 42, and only because Diego Schwartzman pulled out injured at the last minute—the Italian had lost out in qualifying to Aljaz Bedene.

But the pacey, warm indoor conditions, and a big centre-court stage, clearly suited his personality and his attacking game. He had to beat quality opponents from the start, the likes No26 Dusan Lajovic, before facing and beating the best player in the world, No1 Novak Djokovic, for the loss of only three games. With victory over Dan Evans, he was into his first ever ATP500 final and on the verge of breaking the top 30.

The only set dropped by either player through the tournament was by Sonego, and that in qualifying. Indeed both men had looked solid on serve, solid when facing break points, and able to transition into attack mode, pick off net points, throw in drop shots.

But there was no doubting the favourite: Rublev looked on course to seal that well-earned place in London for the first time.

And it was the Russian’s impressive serving that stood out in the early games. He dropped not a point in his first three service games, and he rushed Sonego into a couple of errors to force the break, 4-2.

The power and speed of Rublev were relentless, with big serves, penetrating forehands, and huge drive volleys, but serving for the set at 5-4, he made a couple of nervy mistakes to bring up Sonego’s first break chances.

Rublev went big and bold, even on second serve, to survive, 6-4, with 12 winners to just seven errors, and all seven net points won.

He was pinning Sonego deep behind the baseline, which is not where the Italian’s success was created in his previous matches. So Sonego had to force himself forward to defend deuce in the first game of the second set, and it worked.

Yet Rublev swiftly held to love, and Sonego was serving again. He held firm to the fifth game, where two forehands forced wide brought up break point. He had to dig deep, and he delivered two cracking serves to hold.

It has been an outstanding tournament in an outstanding couple of months for Rublev, and with a crowd-pleaser style. In this match alone, he scored 13-13 at the net, made 23 winners for just 13 errors, and with his emotions channelled into winner mode from beginning to end.

So he joins compatriot Daniil Medvedev among the elite eight in London, and it is still possible for a third Russian, Karen Khachanov, to steal the last place if he repeats his victory run of two years ago at the Paris Masters.

However, the last word goes to the modest new Vienna champion, who revealed that he had a special emotional connection with the city:

“My grandma was also Austrian, so I have Austrian blood. So it’s also a really special title for me.”

She died not long ago: no wonder her grandson did not blink all the way to the title.

Diego Schwartzman is next in line to qualify by more than 400 points, with just two tournaments left—the Rolex Paris Masters and the ATP250 in Sofia.