Esteban Granero: I needed a change and joining QPR was the right move

Esteban Granero is engaging, composed and thoughtful as he charms the media at his Queens Park Rangers unveiling 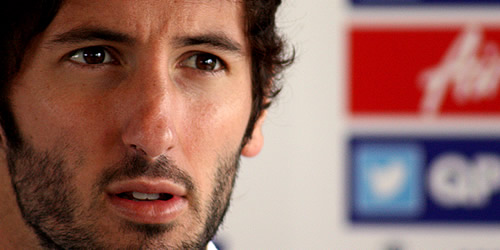 Esteban Granero is not your typical footballer, but don’t try telling him that.

Books are one of his passions but the Spaniard, who was once photographed reading Kurt Vonnegut’s Slaughterhouse-Five on Real Madrid’s team bus before his £9m transfer to Queens Park Rangers, refuses to accept that this could set him apart from the public’s perception of the modern-day footballer.

“Many people do that,” he says, dismissing the notion that most footballers probably do not. “I don’t know, I don’t think about that. I like to do it and that’s all. When I finish training I’m a normal person. Some people like to play computer games, some people like other things. I’m not more special because of that. It’s normal that people have these hobbies.”

He is engaging, composed and speaking in impressive English at his unveiling at QPR’s Harlington training base on a sunny Tuesday lunchtime. The interpreter to his right is a bystander as the 25-year-old expertly glides through his first news conference on these shores.

He laughs when his nickname (he is known as ‘the pirate’ in Spain), is brought up. “I think it’s about my look,” he smiles, pointing to his face. “Eight years ago they started calling me this. If I shave I look like I’m 18!”

Granero completed his surprise move to Loftus Road from Real Madrid a day before the summer’s transfer deadline. A switch from the defending Spanish champions to a club that escaped relegation by the finest of margins last season inevitably raised a few eyebrows. But Granero insists the decision to leave his boyhood club was not as difficult as it may appear on paper.

“It was my club since I was eight, so of course it’s a big change,” he explains. “But it was not that traumatic because of this project that was waiting for me. I am so excited to be important here. Since two weeks ago, my thoughts are here and I don’t miss Real Madrid. It wasn’t that tough to leave. I played three years for Real Madrid. Now I’m more mature. I’ve improved my mind and my football, and now I’m looking forward to showing it at Queens Park Rangers.”

After making his way up through Real Madrid’s C and B teams, Granero was loaned out to Getafe as a 20-year-old. He impressed in the 2007-08 campaign and joined the club on a permanent deal the following summer. The central midfielder caught the eye as he made 79 appearances during his two seasons at Getafe before Real exercised an option to buy back their youth product in 2009.

He went on to play 96 games for his boyhood club in the three seasons that followed but was limited to just 17 league appearances last term as Jose Mourinho’s men clawed the Spanish title away from Barcelona.

“I will always be thankful to Real Madrid, but it was time to change, and the best way to change was QPR,” he says. “I’ve come because I’m sure this club will be very good for me, and I am convinced that I can be good for QPR.”

So what drew him to England? “The Premier League has always impressed me. I had the chance to play the first game last weekend and I like this football a lot. I’m impressed by how they’ve received me here at QPR, the people and I’m also impressed by the city. The people are very respectful. I cannot say anything bad about my first two weeks here.”

And what drew him to Loftus Road? After all, Arsenal, Liverpool and Tottenham were amongst the more established top-flight clubs linked with his signature. “I spoke with the manager Mark Hughes. He told me of his interest, and his confidence in me is the most important thing. He also told me about QPR’s project. I was very excited by it and wanted to be part of it. We don’t have to put limits to this project. We can’t think in the long-term, but only think about the next game, and develop little by little.”

He may not accept that a passion for books sets him apart from your everyday footballer, but Granero is certainly trying to be original on the pitch as he bluntly refuses to compare his style to any other player. “It’s hard to compare footballers. There are no two the exact same. I don’t think I can compare with anybody. You will see the way I play.”

If he carries the same thoughtfulness, composure and confidence that was on show here onto the pitch, QPR fans appear in for a treat.