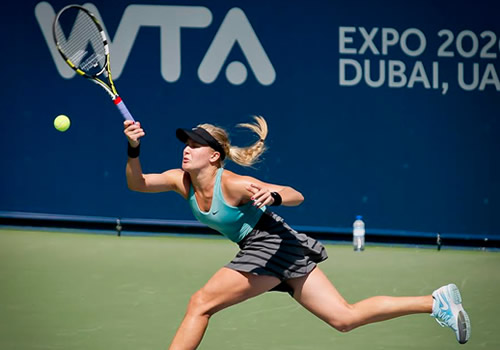 Eugenie Bouchard has been awarded a wild card to this week’s Dubai Duty Free Tennis championships.

The Canadian 20-year old has risen to as high as five in the world and she still sits firmly inside the top 10 after last month reaching the quarter-finals of the Australian Open.

Her 2014 breakthrough season saw her reach her first Grand Slam semi-finals, at the Australian Open where a year before she had failed to qualify, and at the French Open, and she followed up those efforts by sensationally going all the way to the Wimbledon final, beating top 10 opponents Angelique Kerber and Simona Halep before her run was ended by former Wimbledon and Dubai champion Petra Kvitova.

Other highlights included a march to the fourth round of the US Open, and her first WTA title earned in Nurnberg. She was runner-up to Kvitova again in Wuhan, and she reached the semi-finals in Charleston after beating reigning Dubai champion Venus Williams and world number eight Jelena Jankovic.

A second wild card has been awarded to Flavia Pennetta. The popular Italian has claimed an impressive 10 singles titles and reached a further 14 finals, which includes lifting the Indian Wells title and reaching the final of the Tournament of Champions in Sofia in 2014. She also has a fantastic record at the Dubai Duty Free Tennis Championships, last year qualifying and then beating former champion and world number three Agnieszka Radwanska to reach the quarter-finals. Three years before she upset world number nine Victoria Azarenka.

The effort that Casey Dellacqua always puts into her matches has been recognised by the Dubai Duty Free Tennis Championships in the form of the third wild card that has been awarded. The feisty Australian can never be discounted in any match, with her determination to fight to the end whenever she plays. Last year she qualified for Indian Wells and went all the way through to the quarter-finals, and when she came up against recently crowned Dubai champion Venus Williams in Miami she stretched her to three close sets before the relieved American edged through 6-4 in the final set.

A fourth wild card has gone to svelte Slovak Daniela Hantuchova, who has been ranked as high as five in the world in both singles and doubles. She has six singles titles, with her most recent coming in Birmingham in 2013, and she has contested a further nine finals. She has also shone in doubles, winning nine titles and reaching a further 12 finals which included the French Open and two Australian Opens. Not only that, but she has earned a rare Grand Slam of mixed doubles titles, lifting the trophy at Wimbledon and the Australian, French and US Opens.

The fifth and final wild card has been awarded to Turkey’s Cagla Buyukakcay, Ranked 117, she was a recent member of Turkey’s Fed Cup team, and most of her success has come on the ITF circuit where she has earned six singles and no less than 14 doubles titles.

“She has risen very swiftly to the top of the game and draws huge crowds wherever she competes, even generating her own Genie’s Army of enthusiastic supporters. Her participation here will make competition for the title stronger than ever and it is impossible to predict who will emerge at the end of the week as the winner.”

Tournament director Salah Tahlak added: “With nine of the top 10 and 18 of the top 20 competing for the coveted trophy, tennis fans are set for an unprecedented week of spectacular competition. With so many accomplished champions taking part, every one of them is capable of winning the event but there can be only one prize winner.”