EXCLUSIVE: This is a transitional season for Chelsea – Michael Essien 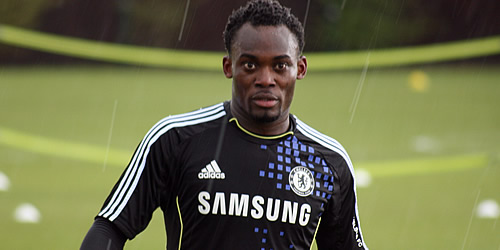 Michael Essien believes Chelsea are in a “transitional” period but insists the Blues are well-placed to pick up some silverware to cap a turbulent season at Stamford Bridge.

The west Londoners, who take on Rubin Kazan in the Europa League quarter-finals, bounced back from their 2-1 Premier League defeat at Southampton by edging into the FA Cup semi-finals at the expense of Manchester United on Monday.

And Essien, who won four FA Cups with Chelsea before heading out on loan to Real Madrid this term, insists Rafael Benítez’s men should not be underestimated as they look to end the season with some silverware.

“They can still win trophies in the cups this season so people shouldn’t write them off yet,” Essien told The Sport Review.

“I have followed Chelsea all season, and although it hasn’t been as planned at the start of the season, I think it’s down to the fact it is a transitional season.”

Essien refused to point the finger at interim boss Benítez, who took over from Roberto Di Matteo back in November, and insisted that a new-look squad, coupled with the loss of players such as talismanic striker Didier Drogba, are the main factors behind Chelsea’s struggles this term.

“A lot of the players from the past are not there and there are new players,” the 30-year-old continued.

“It takes time to blend all of them and create a team straight away. I am sure over time the team will know each other very well and the good times will be back.”

Regarding his own future, Essien appears to be set for a return to west London following his year in the Spanish capital.

He added: “I have a contract at Chelsea and at present I am only on loan here [at Real Madrid], so nothing has changed.”

Fulham 3 QPR 2: We almost threw it away, admits Dimitar Berbatov