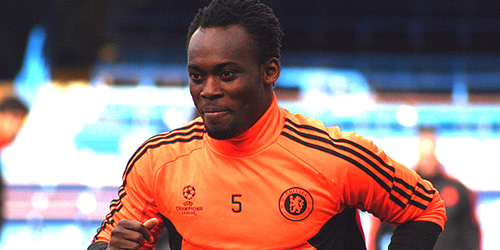 Michael Essien is looking forward to returning “home” to Chelsea this summer and expects to be part of the Blues’ plans for next season.

The 30-year-old Ghana international has spent the season on loan to Real Madrid but has two years left to run on his contract at Stamford Bridge.

“As things stand Michael is still a Chelsea player and will be returning this summer,” a source close to Essien told The Sport Review.

“He is looking forward to coming back ‘home’.

“He enjoyed every minute at Madrid but it was always a year-long loan and nothing has changed.”

The midfielder, who has also been deployed at right-back this season, has started 18 La Liga games for Los Blancos and found the net in a 4-0 win over Real Zaragoza back in November.

Essien is widely expected to be followed back to west London by Jose Mourinho, who is reported to have agreed a £40m four-year deal this week to take the reins at Chelsea for a second time.

And Essien, who won his first Premier League title under the Portuguese coach at Chelsea in 2006, has enjoyed linking up with the 50-year-old again at Madrid.

“I always call him ‘daddy’ because because he tells you off when he feels you are wrong and praises you when you do well,” Essien said back in April.

“He makes us all feel special by instilling belief in us all the time.

“He lets you believe in your own ability and as a player when the coach makes you feel good [and] you will give everything for him.”