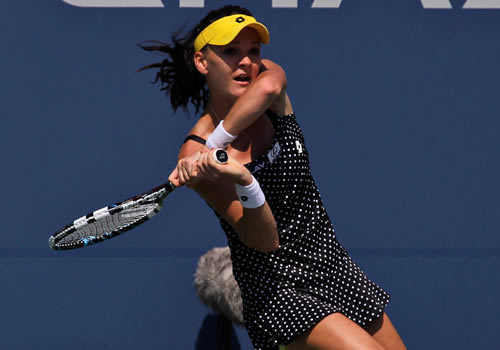 It was already a headlining week for Agnieszka Radwanska. For the fourth year in a row, the ever-popular young woman from Poland walked away with the WTA’s Fans’ Favourite Award.

A week earlier, she won had also won the WTA’s Shot of the Year Award for the second consecutive time, on both occasions claimed with the kind of backhand wizardry for which the slight, nimble and multi-talented Radwanska has become famous.

Few women on the tour possess the touch, variety, imagination and all-court placement that the Polish woman has. And it is as much down to that court craft—which can bamboozle some of the fastest and most powerful competitors out there—as her winning personality that she has captured so many fans.

Through these assorted announcements, though, came hints of something big behind the scenes, after Radwanska revealed to the Polish press last week that she was hiring a ‘supercoach’—the term coined in the last year to cope with the spate of past champions who have joined forces with current champions: Stefan Edberg with Roger Federer; Boris Becker with Novak Djokovic; Andy Murray with Ivan Lendl and then Amelie Mauresmo; Goran Ivanisevic with Marin Cilic.

Rumours were therefore rife, stoked early yesterday by a tweet from Radwanska saying “Some exciting news to share in a couple of hours hopefully…”

An hour later, came that news: “So happy to announce @Martina as the newest member of my coaching team!”

There are few in tennis, indeed in any sport, who are known by their first name alone, but Martina is one: the mighty Navratilova, that is. A record-breaker on the tennis court, a humanitarian and campaigner for equal rights off the court, the 58-year-old Navratilova remains a woman of formidable energy and talent.

Winner of 18 singles, 31 doubles (an all-time record) and 10 mixed doubles Grand Slam titles, she reached the Wimbledon singles final 12 times, winning it a record nine times—six of them consecutively. Navratilova is one of just three women—the others being Margaret Court and Doris Hart—to have won a career Grand Slam in singles, doubles and mixed doubles, the famous ‘boxed set’. 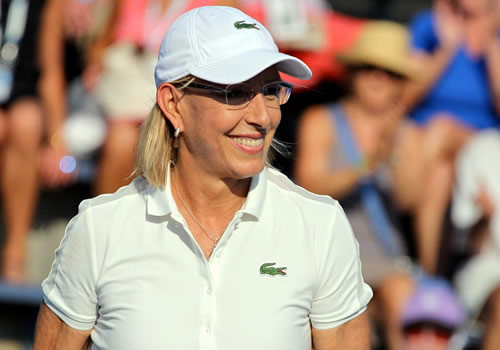 She also holds the records for most singles titles (167) and most doubles titles (177) in the Open era. She topped the singles rankings for 332 weeks and the doubles for a record 237 weeks, making her the only player in history to have held the top spot in both singles and doubles for over 200 weeks. She played in her first singles Major in 1973—reaching the quarter-finals at Roland Garros—and played her last in 2004, a second-round exit at Wimbledon: that’s a span of over 30 years. And still she reached three more semis and four more quarters in Major doubles until her retirement in 2006.

Navratilova’s Twitter bio says simply: “Used to play tennis, now just talk about it. Like to talk politics, though some would rather I stick to tennis: No chance!”

To that soaring resume and modest bio she will now have to add another new occupation: tennis coach. And not just to an aspiring junior but to one of the most consistent and successful players of the last few years.

Radwanska, still only 25, has accumulated 14 titles, and reached the fourth round of her very first Grand Slam at Wimbledon eight years ago: She had also been junior champion there the year before. She has gone on to reach 10 Major quarter-finals—the US Open is the only one missing—and took Serena Williams to three sets in the final of Wimbledon in 2012.

That run saw her rise to a career-high No2 in the rankings, but she has since struggled to reach the same heights. This year, she claimed just one title in Montreal, and went on to win only seven more games by the year’s end to slip to No6, her first time outside the top five in almost three years.

So this gear-change is timely—and it begins immediately after Christmas when Navratilova joins Radwanska’s current coach, Tomasz Wiktorowski.

This is a new venture for Navratilova, and she revealed some of her nerves about the career-change to the WTA:
“I did not sleep very well last night, thinking about getting back into match mode and the competitions. I am really excited about this opportunity to join Agnieszka’s team and work with Tomasz, and it is going to be a fun challenge. I was delighted when Agnieszka asked me… and I can’t wait to get started.”

Radwanska, so close to winning a Grand Slam and reaching No1 at just 23, certainly has time on her side in fulfilling those ambitions. She told the WTA:

“I am absolutely delighted that Martina has agreed to help me and my team next season. She is my idol in tennis and I am honoured we will be working together. Her achievements speak for themselves and I hope that I can learn from all her experience. My goal is to win a Grand Slam, so to have someone with Martina’s accomplishments in my corner is going to be hugely advantageous and give me a big boost.”

The first big test will be the Australian Open, where Radwanska scored her best Major success last year after a semi run, beating defending champion Victoria Azarenka in the process. With current champion Li Na retired and Azarenka absent for much of 2014 with a foot injury, the door has opened a crack. But there remain the formidable presences of the top two women, Williams and Maria Sharapova, against whom Radwanska has managed just two wins in a combined 19 matches.

But if anyone can unlock Radwanska’s potential, surely it is Martina.