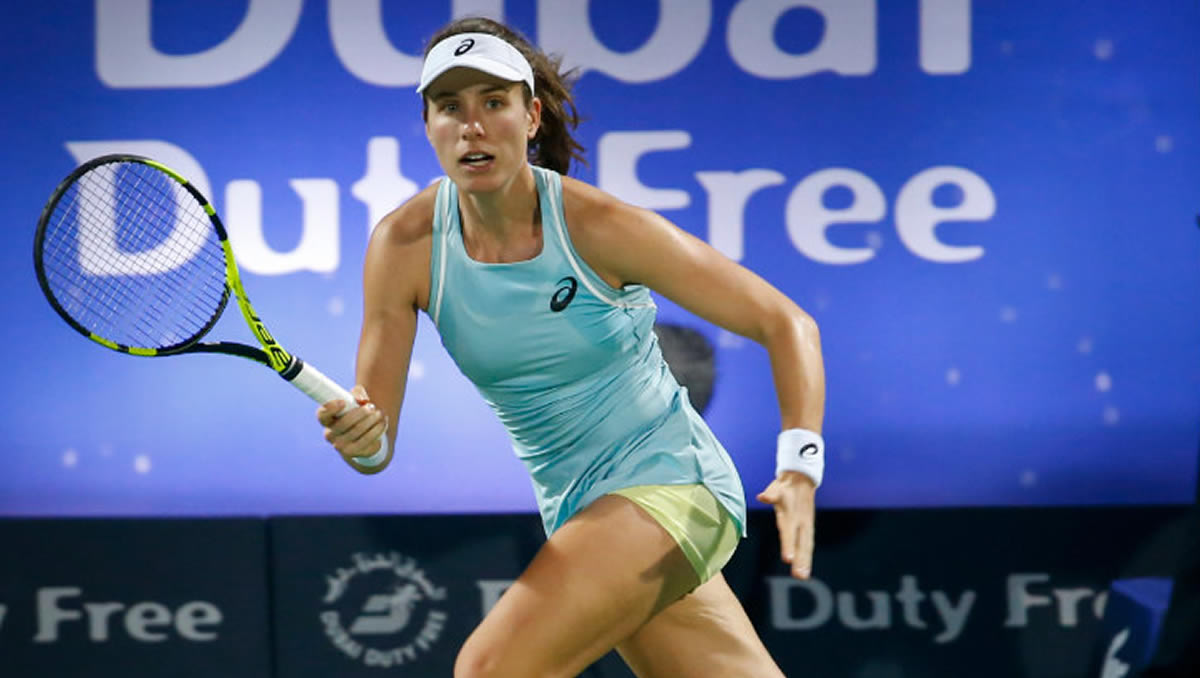 Late Thursday night, Johanna Konta and Katie Boulter maintained their unbeaten record in Bath as each fought off their toughest challenges so far from the spirited Greek duo of Maria Sakkari and Valentini Grammatikopoulou respectively in tough three-setters.

With victory in the concluding doubles match by Harriet Dart and Katie Swan, 6-1 6-4, GB headed into their last pool tie with a 3-0 victory.

But despite having also beaten their opening tie against Slovenia in even more convincing style—all three rubbers won without dropping a set—the GB squad had still to win the third tie against Hungary, who had lost only one match in their first two rounds.

So come Friday, it was a winner-take-all showdown to reach Saturday’s concluding knock-out tie, against the winner of the other pool in Bath, Serbia, to determine who got a shot at entering World Group II come the play-offs in April.

The No39-ranked Konta sealed her win over Sakkari, ranked one place above her, after an exhausting two hours and 42 minutes. It took Boulter, age 22 and playing in her first Fed Cup tie, well over two hours to come through her rubber, too.

No doubt the near-packed auditorium at Bath University helped to lift the Britons to significant wins. The No83-ranked Boulter, who was at 199 at the start of last year, said after that Greek win:

“My mentality is to go out and fight, no matter what happens. It was a really tough match and I’m just happy to get through it. The support was absolutely incredible today. It really got me through.”

Boulter would find herself in another dog fight against Dalma Galfi, another three-set battle of more than two hours 20 minutes.

She was just edged out of a second set tie-break, and then had to fight back from a break down in the decider. But she upped her aggression and intensity to do just that. Galfi proved a hard nut to crack, and while Boulter would twice hold to love to reach 6-5, she had to play another tie-break—and did so with fire. Her opponent slipped, had repairs to her fingers, but could not hold off the Briton, who took GB ahead, 6-4, 6-7(5), 7-6(1)—but there was a long way still to go.

Not until almost 8.30pm did Konta face 21-year-old Anna Bondar, ranked just 224, in what should have been a much more straightforward match for former top-10 Konta. Sure enough, she broke in the opening game and held for an immediate 2-0 lead. Another break, and Konta served out the set, 6-2.

The second set was a much closer affair, though Konta had numerous chances to break the Hungarian serve. And so it headed a tiebreak, and now Bondar went on the offensive to storm to a 5-0 lead. With almost an hour and a half on the clock, Bondar fired off a couple of huge forehands and sealed the set, 7-6(1).

The Hungarian got an early break in the decider, but Konta levelled again for 3-3. Then the Briton found herself up against it in the 11th game, a long-drawn-out affair where she fended off break points.

Bondar was striking the ball big, and held with ease to take it to a deciding tie-break, but this time, they changed ends with Konta 4-2 up after the Hungarian netted a forehand, only for Konta to return the favour with a netted backhand.

In the end, though, after two and three-quarter hours, Konta worked match point, 6-4, and a final forehand error from what had been Bondar’s strongest shot finished another long night, 7-6(4).

It was a gutsy performance from a player who has struggled with form for much of the last year. But in typical style, Konta afterwards praised her equally gutsy opponent:

“The reason why I was on the ropes was because of the way she was playing. She played amazing tennis. I am very fortunate to have come through.

“She was playing well so I had to remember that and to not judge myself too harshly and try to break her rhythm as much as possible.”

She then went on to praise her young compatriot:

“That was just another incredible match after Katie’s. She had a big battle too… I am just happy I followed on from Katie as she is doing incredibly well. It is another opportunity we have given ourselves, and we’ll go into tomorrow and put it all out there like we have done so far.”

Such a late finish, after 11pm, gives little time for recovery, and certainly less than the time enjoyed by Serbia, who advanced to the knock-out tie late Friday afternoon. How much do the British women have left? With that chance of promotion beckoning come April, the 2,000 fans fortunate to have tickets for the conclusion will hope it is enough.

What has been and what will be for GB

This was GB’s first Fed Cup tie on home soil in 26 years, and in all that time, the Britons had fallen short of the World Group level, often by very small margins. Indeed, they had come through the initial round-robin Pool stages in four of the last seven years, only to fall at the World Group II play-offs each time—including the last two years. A win over Serbia will extend that run to three—and another chance to reach World Group II