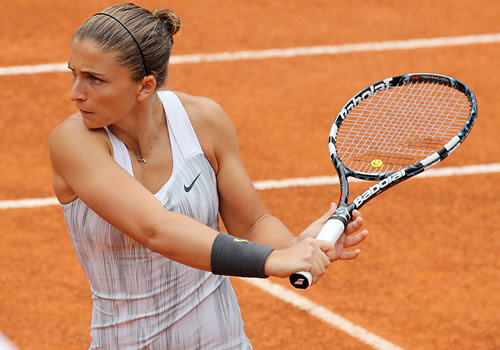 Italy took a commanding 2-0 lead on the first day of the Fed Cup final against Russia in Cagliari thanks to wins from Roberta Vinci and Sara Errani.

Vinci battled back from a set down to beat Alexandra Panova 5-7 7-5 8-6, before Errani eased past Irina Khromacheva 6-1 6-4 on the clay courts in Sardinia.

“It was a tough match,” said Vinci after her three-set win. “There were a lot of ups and downs. I was a little bit injured and at the end I had a little bit of cramp.

“My captain told me to try to play a lot of balls on the court. I think at the end she was a little bit tired and also it was the first time she played Fed Cup so there were probably a few nerves.

“I have had a great season but this is a fantastic win. I love to play Fed Cup and this was an important match. It was incredible and unbelievable to play for Italy.”

Errani has the chance to wrap up victory for Italy and seal a fourth title when she meets Panova in the first of Sunday’s singles matches.

“I was a bit down in the second set,” said Errani following her convincing win over Khromacheva. “I was very tired physically. Also the weather at night was a bit more heavy so it was not so easy for me.

“I can play much better of course. I am a little bit tired and there is a lot of tension so it is not easy to play in Fed Cup. Also when you are favourites like this it is not easy.”

Elsewhere, Samantha Stosur will face Simona Halep in the final of the WTA Tournament of Champions in Sofia.

Halep came back from a set down to beat Ana Ivanovic 2-6 6-1 6-3, while Stosur battled past Anastasia Pavlyuchenkova of Russia 6-1 1-6 6-3 in the semi-finals on Saturday.