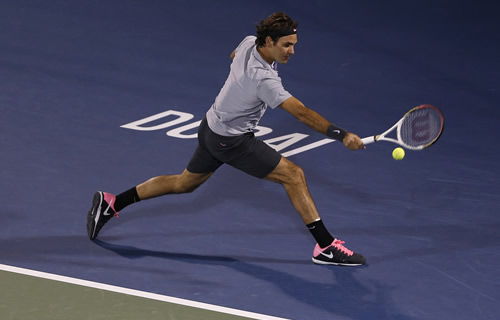 As the Australian Open becomes a distant memory and the indoor swing of Europe winds down, February races headlong towards March and the first Masters events of the tennis year.

Many of the biggest draws on the men’s tour have been resting, recuperating and preparing for the rigours of the demanding but lucrative hard-court climax before the burnt orange season of clay ushers in its altogether different challenges. And the prizes up for grabs once the tour reaches the hot courts of North America—the mountain-fringed desert of Indian Wells and the palm-fringed ocean of Miami—pay back the hard yards of training in spades.

The man on top of the rankings, Rafael Nadal, needed a break more than most after a back problem during the final of the Australian Open forced him to delay his return in South America. But he finally took up his racket at the newest 500 on the tour in Rio, and what better way to celebrate a return to his winning ways than on his beloved clay in his 800th match—a win, naturally—in Brazil.

His compatriot, David Ferrer, is also in Rio, but made the most of Nadal’s absence to claim last week’s Buenos Aires title.

Andy Murray, along with Jo-Wilfried Tsonga, Tomas Berdych and Juan Martin del Potro, decided to get keep their hard-court legs busy at indoor tournaments in Rotterdam, Montpellier and Marseille, but two of the biggest stars in tennis have kept their training under wraps until now, at one of the most prestigious 500 tournaments of the year: the Dubai Duty Free.

Few locations on the tour are more impressive—the skyline of Dubai draws a spectacular line between the blue Persian Gulf and golden Arabian desert—and few tournaments outside the Majors and Masters can compete in star appeal. The draw may number just 32 but this event has been voted the ATP Players’ Favourite 500 in nine of the last 10 years.

Sure enough, it is here that Novak Djokovic makes his first appearance since the Australian Open, and here that Roger Federer will play for the first time since his Swiss Davis Cup duties almost a month ago.

Djokovic and Federer have claimed a remarkable nine of the last 11 Dubai titles, with just Nadal in 2006 and Andy Roddick in 2008 breaking their dominance.

That first Federer win in 2003 came in only his second appearance in Dubai, and he went on to make it three in a row with victory in 2004 and 2005 as well.

Nadal ended his 19-match winning streak in a dramatic three-set final in 2006, and then in 2007, Federer met Djokovic for the first time in Dubai in the Serb’s debut appearance. Federer won in a tight, three-set quarter-final, going on to take the title for a fourth time, but the tables were turned in the 2011 final—a two-set victory to Djokovic for his third title in Dubai.

In 2012, Djokovic and Federer were also drawn to meet in the final but Murray took out the Serb before falling to Federer: It was a record fifth title for the Swiss.

Then in 2013, it was Federer’s turn to stumble in the semis, going down to Berdych after holding three match points, and Djokovic went on to claim his fourth title. This year, then, the Serb will be aiming to equal Federer’s Dubai record and also aiming to win a career-first fifth title.

And so to this year and a possible 32nd meeting in what has become one of the rivalries of the decade. But for the only time since that first Dubai meeting, one of these two players is ranked outside the top four.

Just a year ago, Djokovic and Federer were ranked Nos 1 and 2 in the world, but after suffering from back problems during much of 2013, Federer’s ranking hs dropped to an 11-year low of No8. That meant, when the draw was made this weekend, that defending champion Djokovic filled the top line but del Potro filled the bottom. Luck would determine into which half Federer fell—and it was Djokovic’s. If Federer is to halt Djokovic’s three-match run against him, then, it will have to be in the semis.

On paper, both should indeed reach the allotted semi face-off. Djokovic’s quarter-final seed is the No16-ranked Mikhail Youzhny, who has so far been on a poor run of form this year: a Round 2 exit in Australia and Round 1 losses in Rotterdam, Zagreb and Chennai. Djokovic, though, has a tricky first opponent in the unpredictable Denis Istomin, though the Serb won in straight sets in the third round in Melbourne.

Federer’s first seed is the 28-ranked Dmitry Tursunov, who has risen from No120 this time last year. This segment also contains two big-hitting men in Lukas Rosol and Daniel Brands, the latter being a surprise winner over Federer in Gstaad last summer. Federer was, back then, fighting for fitness as well as testing a new racket, but at the start of this season, he has shown signs of his former glory, with strong wins over Tsonga and Murray in Australia.

If the top half of the draw is heavy with significance—should Djokovic meet and beat Federer, he will draw level in their head-to-head—the bottom half throws the prospect of one former Grand Slam champion in del Potro against one of two Grand Slam finalists: Berdych at Wimbledon in 2010, Tsonga in Australia in 2008.

The third seed, Berdych, has drawn the short straw of Tsonga in his quarter, but also the prospect of a tough second-round match against Ivan Dodig or Sergiy Stakhovsky. He is, though, in good form, arriving with the Rotterdam title and his first ever semi finish in Australia. What’s more, he beat Federer in the semis here last year.

The other seed in Del Potro’s quarter is No25 Philipp Kohlschreieber, though the German may have his work cut out in Round 2 where he will meet the winner of the first-round match of the tournament between No32 Andreas Seppi and No31, Florian Mayer.

This is del Potro’s third straight year at Dubai, and a key factor will be whether the wrist injury that has troubled him since Australia is fully mended. On his two previous visits here, he lost in the semis to Federer in 2012 and Djokovic in 2013. And the chances are, he would have to beat one or the other this year to put his own name on the Dubai honours board.