Federer and Wozniacki voted Ambassadors of the Year by ITWA 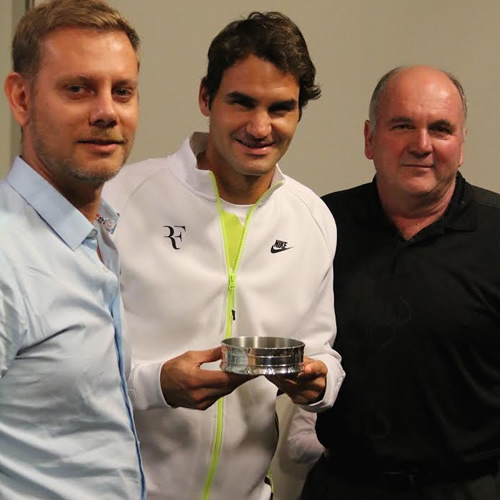 Roger Federer is presented with his award in Melbourne by ITWA representatives Photo: Ben Rothenberg

Roger Federer and Caroline Wozniacki have won the International Tennis Writers Association’s Ambassadors of the Year Awards for 2014.

This is the sixth time that Federer has won the award and the first time since 2009, while for Wozniacki it is her second award, the first coming in 2011.

Both players had good years on the court. Federer won five titles from a tour-leading 11 finals and ended the season with a first Davis Cup and more match-wins than any other man, 73 of them.

Wozniacki returned to the top 10, reached her first Grand Slam final for five years, and beat Petra Kvitova, Agnieszka Radwanska and Maria Sharapova back-to-back to reach the semi-finals of the WTA Championships.

However, these awards are as much for their off-court efforts as their tennis. Both players ended their seasons in fund-raising efforts, Federer playing compatriot Stan Wawrinka in Switzerland for his Foundation, Wozniacki running for charity in the New York Marathon.

The ITWA represents more than 120 of the world’s leading tennis journalists, and its awards recognise this combination of tennis achievements, including conduct that shows tennis in the best possible light and co-operation with the media.

Sebastian Fest, co-president of ITWA, said: “Roger and Caroline are both great champions, but they are also superb ambassadors for their sport. Both understand that a good relationship with the media helps them, helps us, and helps the sport.

“For many years Roger has given much of his time talking to the media, and speaks in three languages at most of his press conferences. Caroline has also given many hours to the media, particularly over the last year.”

Australian Open preview: Djokovic, Federer locked in race for title and No1