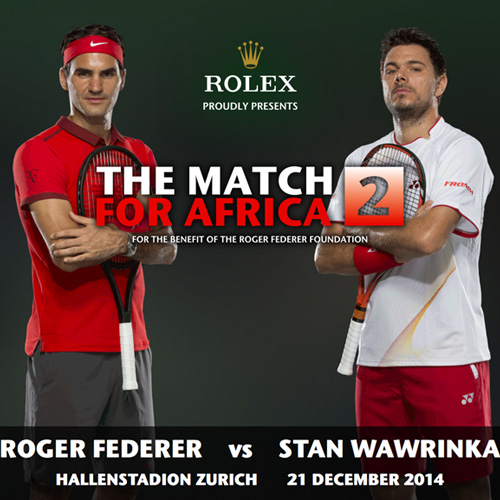 They may have become arch rivals when it comes to Grand Slams, Masters and rankings.

Roger Federer may have stood like a colossus over Swiss tennis—indeed Swiss sport—for more than a decade, keeping Stan Wawrinka firmly in second place when it came to records, titles and limelight.

Finding his greatest form and confidence during his late 20s, Wawrinka may then have thrown down a gauntlet that the chasing pack to “the big four” would pick up with renewed hope. He may have scored nine victories over top-10 opponents to reach his first World Tour Finals in 2013 and twice taken Novak Djokovic to five sets in Grand Slams.

And Wawrinka may finally have stolen some of his compatriot’s thunder in January by winning his first Grand Slam to overtake Federer in the rankings: He rose to a career-high No3 while Federer dropped to an 11-year low of No8.

And this year, Stan the Man may have scored his only win over Federer since his first in Monte Carlo in 2009—again in Monte Carlo, in the final.

But then a resurgent Federer regained the upper hand with a four-set win at Wimbledon, overtaking Wawrinka in the rankings once again.

Yet these same two, greater rivals for rankings and titles than ever before, are the firmest of friends.

In Basel last year, with both men still on the cusp of qualification, Federer was asked about the rivalry: “I’ll be happy if Stan qualifies. If that meant I would miss it, I honestly don’t care… I’m always happy for his results, to the degree that I’m almost happy if he beats me.”

At the World Tour Finals—and they both did qualify—Wawrinka affirmed: “For me, Roger is the best player ever.”

And this year, ranked Nos3 and 4 in the world and with their head-to-head at one apiece, they have become more united than at any time since they won Olympic gold together in 2008. For they have a common purpose, a unique goal, a first Davis Cup victory for their nation just one tie away.

The two will join forces for the fourth time this year when their nation takes on France after the year’s regular tour is done. But win or lose, they have also announced that the Davis Cup final will not be their last joint venture of 2014.

Just four days before Christmas, in homeland Zurich, they will face one another across a net with another joint aim: to raise funds for the Roger Federer Foundation.

“Match for Africa 2” will attempt to emulate the success of Federer’s previous match at the same Hallenstadion Arena against Rafael Nadal in 2010, a match that netted $2.6 million.

And why Africa? Federer’s mother was born in South Africa, so the young Swiss became familiar with the country from holidays with relatives. And once Federer began to enjoy success and the financial rewards that followed it, he chose to support education projects in six countries in southern Africa and in Switzerland. This year, his Foundation marks its 10th anniversary.

So what better way to mark a decade of fundraising than on a Swiss stage just a month after their Davis Cup final: two friends and rivals who have helped make a country no bigger than Greater London into one of the powerhouses of world tennis?