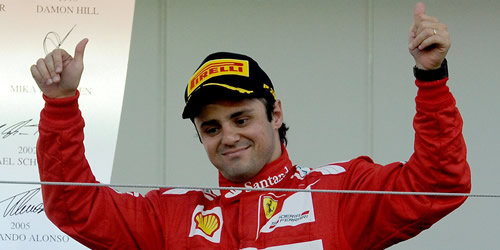 Felipe Massa's new deal will keep him at Ferrari until the end of 2013 Photo: Ferrari

Felipe Massa has ended speculation over his immediate future by penning a one-year contract extension with Ferrari to keep him at the team until the end of 2013.

The Brazilian, whose future had been the subject of constant speculation this year, had struggled for much of the season but secured second place at the Japanese Grand Prix and finished fourth in Italy as he gradually crept up the drivers’ standings.

Massa then followed up his recent improved form with a fourth-place finish at Sunday’s Korean Grand Prix and the 31-year-old, who is ninth in the standings, admitted his delight at been rewarded with a new deal.

“I am delighted with this agreement,” Massa said. “Ferrari is my sports family and I have always raced in Formula 1 driving engines built at Maranello: I can’t see myself behind the wheel of a car driven by any other units!

“First I want to thank the President Montezemolo and Stefano Domenicali, who gave me confidence and I have always maintained belief, even in the most difficult moments.

“Both the team and the fans can be assured that I will do all that is in my power to help the Scuderia to achieve the goals that arise every year.”

The announcement of Massa’s deal comes after Ferrari moved to deny reports on Monday claiming that Red Bull’s Sebastian Vettel has agreed to move to the team from 2014.