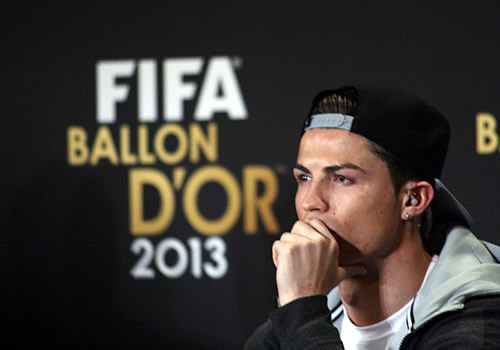 The Blues have been linked with a big-money move for the Portugal international, who was reportedly unhappy at the sale of Angel di Maria to Manchester United this summer.

He knows when Courtois comes back, he signs a new contract and stays a very long time

The 29-year-old forward is also a reported target for the Red Devils after quitting Old Trafford to complete a dream £80m move to the Spanish capital in 2009.

Ronaldo won La Liga and the Copa del Rey under his compatriot Mourinho before the 51-year-old Portuguese coach sealed a return to the west London side in 2013.

But the Chelsea manager insisted that the Premier League leaders have no plans to prise Ronaldo to Stamford Bridge, despite the recent reports in the British media.

Asked about a move for Ronaldo, Mourinho said: “Forget it!”

Chelsea goalkeeper Thibaut Courtois signed a new five-year deal with the west London side on Thursday after usurping Petr Cech as Chelsea number one.

And Mourinho insisted that the Czech Republic international wasn’t in the dark on his club’s plans to tie down his rival goalkeeper to a long-term deal.

“I don’t think there is any problem,” he continued. “Petr is very intelligent guy, and he knows when Courtois comes back, he signs a new contract and stays a very long time.”

“Now we have Courtois with a five-year contract and it gives us stability with a very good young player. Petr has two years [left] on his contact and is a very good goalkeeper. I am more than happy to have both.”