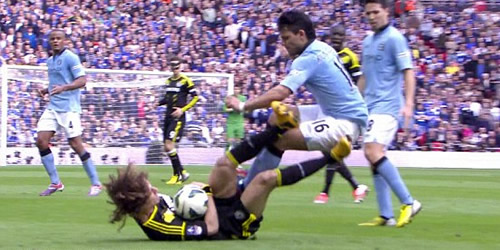 David Luiz insists he holds no grudges with Sergio Aguero over his dangerous stamp on the Chelsea defender during Manchester City’s 2-1 FA Cup semi-final win at Wembley.

The Argentina international is currently waiting to discover if he will face retrospective action from the FA after the tackle nine minutes from time only resulted in a free-kick to Chelsea.

“People said to me it was a bad tackle but I didn’t see it because it was in my back,” said Luiz. “I don’t like to speak about bad things.

“He needs to be honest with himself, he is a great player and scores great goals, makes a lot of people happy with his goals, and this is not his style.

“Sometimes people are angry for five seconds and do bad things, but I forgive him.”

Goals from Samir Nasri and Aguero gave City a 2-0 lead at Wembley before Demba Ba pulled one back for the Blues.

However, the west Londoners were unable to mount a comeback and City booked their place in the final on 11 May against Wigan Athletic.

Luiz added: “We created a lot of opportunities to score the second goal, so we were unlucky, but this is football.

“We were back in the game, and had chances to score. We showed our quality, but their goalkeeper did a great job.”