‘I want to watch the football’ will be the most common way to get out of some action between the sheets this summer, reveals study 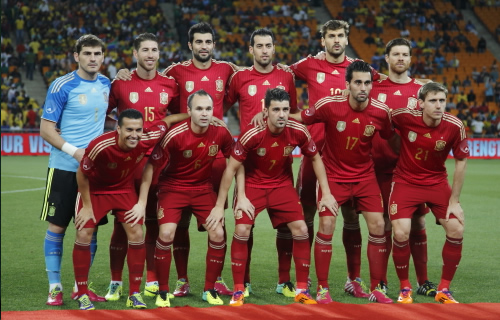 The World Cup kicks off on Thursday Photo: FIFA

The classic excuse of claiming to be too tired to have sex with your partner has been substituted ahead of this summer’s World Cup.

According to a study by Durex, ‘I want to watch the football’ will be the most common way to get out of some action between the sheets during the tournament in Brazil.

Telling your partner ‘I’ve got a bad back’ or ‘I’m too tired’ made up the top three excuses, with ‘I’ve got a headache’ and ‘I’ve been working late’ rounding out the top five.

Even if they do get intimate with their partners during the tournament, almost half of the men asked said that they would ‘get it over with quickly’ in order to watch an important game.

Other excuses include ‘I’ve got work to do’ and ‘I don’t feel well’.

The research, which was carried out this month and involved around 2,000 participants, also dismisses the common perception that men are rarely the ones to turn down the offer.

And 37 per cent of men said that they would accept an offer of sex so long as they can keep an eye on the television at the same time.

A Durex spokesperson said: “There is a well-worn stereotype of women making excuses to avoid sex but it seems that when the football is on, the tables are turned.

“Excitement levels for football fans across the globe are reaching fever pitch and for some, the passion they feel for the beautiful game is on a par with, if not greater than, that for their partner.

“But they need to ensure that once those 90 minutes are up, all attention is redirected solely to their loved one… otherwise there may be penalties!

“There will always some who are guilty of faking it whether it’s on the football pitch or in the bedroom and we think now is the time to stand up and declare – great sex is like great football; it’s betting without the faking… and it looks like the public agree!”

Top 10 excuses used to get out of sex

1. I want to watch the football

4. I have a headache

10. I’ve got an early start in the morning