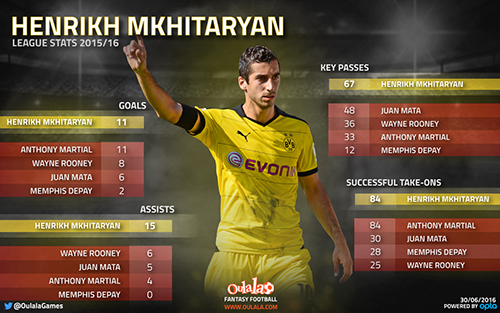 Henrikh Mkhitaryan could become Jose Mourinho’s third signing as Manchester United manager in the next couple of days if reports in the British media are accurate.

The Borussia Dortmund playmaker has been heavily linked with a £30m move to Old Trafford this summer ahead of touted interest from Premier League rivals Arsenal and Chelsea.

With Mkhitaryan’s move to Manchester United gathering pace, Fantasy Football game Oulala have taken a look at four key stats and compared them to four United stars to see how the Armenian fares.

That means the 27-year-old scored more times than Juan Mata and Wayne Rooney.

The United duo are unable to overhaul the Dortmund midfielder in terms of assists, with Mkhitaryan creating 15 goals for his team-mates. Rooney made just six assists and Mata finished on five.

Finally, Mkhitaryan can dribble too. Like Martial, the £30m target completed 84 successful take-ons, which is a staggering 54 more than £37.1m signing Mata.

The above Oulala stats suggest that signing Mkhitaryan is really a no brainer for new United manager Mourinho this summer.